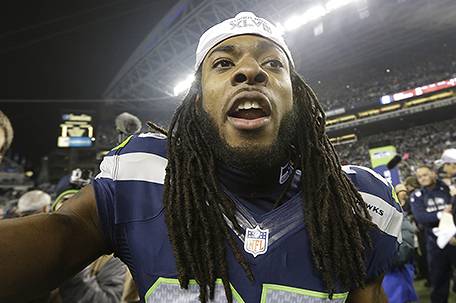 The instant his verbal explosion of an interview hit, the predictable quickly happened with Seattle Seahawks all pro cornerback Richard Sherman.

In fact two predictable things happened with him in the aftermath of the interview.

The stereotypes flew fast and furious. Sherman was of course a “thug,” “dirtbag,” scum,” and “disgrace.” But make no mistake those were the genteel ones. The boing chorus heaped on him the racist favorites, “gorilla,” “ape,” “monkey,” and “animal. “

All the epithets were amply punctuated with the N- word.

While Sherman quickly back pedaled from his tirade against the opposing player that stirred the rant, he bitingly recognized that he was not just a target for his supposedly loose brained, bad behavior in front of a TV camera, but had been instantly transformed into the nation’s new walking, emblematic racial stereotype, “To use racial slurs and bullying language far worse than what you’ll see from me. It’s sad and somewhat unbelievable to me that the world is still this way.” It is and the last person that should be surprised at that is Sherman if he had paid even the least bit of attention to the unabashed and gleeful racial mugging in the past of the legion of bad behaving black sports notables.

Even if Sherman missed that he need look no further than the most recent example of off the chart stereotyping in the trashing of Trayvon Martin. By the time the professional race baiters and legions of others got through assaulting his character and concocting lies about his past he was transformed from the innocent murder victim he was to a closet thug.

As with Martin, and the others, the racial trashing of Sherman is silly stuff. The pantheon of stereotypes and negative typecasting they’re anchored on are not. The hope was that President Barack Obama’s election buried once and for all negative racial typecasting and the perennial threat racial stereotypes posed to the safety and well-being of black males. It did no such thing. Immediately after Obama’s election teams of researchers from several major universities found that many of the old stereotypes about poverty and crime and blacks remained just as frozen in time. The study found that much of the public still perceived those most likely to commit crimes are poor, jobless and black. The study did more than affirm that race and poverty and crime were firmly rammed together in the public mind. It also showed that once the stereotype is planted, it’s virtually impossible to root out. That’s hardly new either.

Sherman is a near textbook example of this. His lofty academic accomplishments, Stanford University degree, and often thoughtful and entertaining interviews, literary analysis and comment on sports and at times social issues, and his touting of education for young blacks meant absolutely nothing to the race baiters.

There’s another predictable thing that’s been very much a part of the Sherman saga. It’s called denial. The same instant that the race baiting flew hot and heavy at Sherman, the eye wash of it flew just as heavy. The scramble was now on to airbrush the race hits on Sherman as just the sick rants of a handful of racists who hid behind the relative anonymity of twitter. And then quickly shift back to Sherman and dump full blame on him for triggering such passionate and angered outbursts from so many people. The message was that the few times that race cropped up against him were unfortunate but had no real significance to explain the massive mostly negative public fascination with a few moments of a rant from a football player of all persons.

In the end, as Sherman found out, it doesn’t much matter how prominent, wealthy, or celebrated the black is. The overkill frenzy feeding on the criminal or borderline criminal antics of a litany of black NFL and NBA stars who run afoul of the law or are poorly behaved, and of course, will always stir the negative image of black males.  Sherman did much to put his team in the Super Bowl. He would have been universally hailed as a hero for it, that is until his rant again blew the hinge off the door of racial stereotypes.