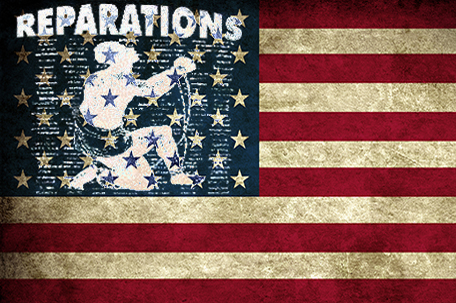 Despite the fact that there is precedent—and a reasonable and cogent argument for it–the issue of reparations for Black people has arisen anew.

African American journalist Ta-Nehisi Coates’ recent article in the Atlantic Monthly, ‘The Case For Reparations’ has everyone, from historians to journalists once again broaching the subject—on one side or another…

Coates’s argument is predicated on the fact that there is precedent. Native Americans have received compensation for their suffering and loss Japanese Americans, the Nisei, were compensated for their imprisonment in U.S.  concentration camps during World War II and the confiscation of their property by the government. Jews were rightly compensated by an international panel for their suffering at the hands of the Nazi regime during  WWII.

But the pain and suffering of Black people of American, Caribbean and Latin American descent under slavery and its legacy of decrepitude and inequality—and centuries of coerced labor–have largely been ignored by the US and the international community.

And some African nations have sought reparations for the loss of populations in their countries where the large scale slave captures took place.

“Two hundred fifty years of slavery. Ninety years of Jim Crow. Sixty years of separate but equal. Thirty five years of racist housing policy—until we reckon with our compounding moral debts, America will never be whole,” Coates says in the opening of his article.

In 1952, a compensation agreement was reached between West Germany and the state of Israel germane to the Nazi regime’s enactment of the Holocaust and the use of Jewish slave labor during the World War II. In 2012, after years of negotiations, appeals by both sides and lawsuits, thousands of Native Americans were slated to receive part of a $3.4 billion settlement with the federal government, ending a long-running dispute over government mismanagement of tribal lands and accounts. In 1999, the Justice Department closed the books on a $1.6 billion reparations program for ethnic Japanese interned in American camps during World War II, and will settle with 181 ethnic Japanese from Latin America who received similar treatment.

“It seems that the entire world supports compensation for everyone but Black Americans,” says Shirley Saldana, a former manager at Nashville, Tennessee’s Equal Opportunity  Commission.

“The descendants of American slavery and the ‘beneficiaries’ of systemic discrimination have received nothing by way of compensation—and it seems inordinate and unfair that African Americans and Afro-Caribbean people have been let languishing on the scrap heap of redress,” Saldana continued.

Robert Westley, a professor of law at the University of Dayton,  has long argued that compensation for discriminated groups set precedent for African American reparations. In a 1998 dissertation on the subject, Westley compared the plight of African Americans with that of the European Jews, Japanese Americans and Native Americans–

“Japanese Americans, and European Jews have sought and won redress of their grievances, “ said Westley. “The case for Black Americans, who’ve suffered centuries of discrimination in housing, in jobs and –have as strong a case for reparations entitlement as any other group. For me, the fundamental question is, why such resistance against the just claims of Black Americans…”

In 2009, after years of lawsuits and negotiation between the U.S. Government and the legal representatives of several American Indian tribes, an initial agreement was outlined. In 2010, Congress approved the resolution. It spent the last several years going through the standard appeals process. In May of this year, the deal was finalized with Congress announcing it on last Monday. The settlement is named after the late Elouise Cobell, a member of Montana’s Blackfeet Indian tribe. The deal follows a class-action lawsuit, filed in 1996, which accused the U.S. Department of the Interior of failing to account for and provide revenue from a trust fund representing the value of Indian assets managed by the government.

“I welcome the final approval of the Cobell settlement agreement, clearing the way for reconciliation between the trust beneficiaries and the federal government,” President Barack Obama said.

Arguments against reparations for slavery in America  are complex and multi-faceted.  Social critic, writer and former college professor Jerry Curtis, outlined several of these arguments in his critique of the legal argument.

“By way of clarifying terms, let’s assume that ‘reparations’ would be in the form of money or special benefits to make amends for our country’s complicity in the slave trade, forced labor, and social injustice of black slavery of 18th- and 19th-century America,” said Curtis. “So the question is, should descendants of American slaves receive a government check or benefit because of the wrongs our ancestors did to them?

“Some argue that reparations have already been made. Abolishing the evil of slavery and giving ex-slaves full citizenship and voting rights remedied the original wrongs—and much of our debt to generations of slaves was paid in the blood shed at places like Gettysburg and Antietam.

“Likewise,” Curtis continues, “the racial and social injustices of Jim Crow laws were atoned for in Civil Rights legislation and landmark Supreme Court rulings that brought Black Americans to full rights and citizenship. Our government has spent millions in set asides, equal opportunity and affirmative action programs that have recognized the crippling effect of discrimination and tried to correct the injustices.”

And finally, Curtis argues that reparations would make amends to no one living. “The victims and the perpetrators of slavery are long dead. Today’s generation is powerless to help the dead. We would have great difficulty in quantifying just what compensation would be appropriate, even if we could identify specific descendants of slaves.“ Curtis said. “No one alive today is morally or legally responsible for the sin of slavery. The United States is a nation of immigrants. Many of our ancestors were not even in the country during the period of slavery (and maybe even beyond). What is the sense of asking their descendants to cough up tax dollars for something they played no part in?

“In 1865, at the end of the Civil War when the Confederates were defeated,” said Saldana, “the U.S. actually had a plan that would have solved this issue in the US. Special Order No. 15, issued by Union General William Sherman, called for the disbursement of lands to the newly freed slaves. Each freed slave was to receive forty acres and a mule that were to be set aside–roughly 400,000 acres in total–for use by the newly freed slaves in order that they might secure and develop territories of their own.  Sadly, President Andrew Johnson reversed the order after the assassination of  President Abraham Lincoln. And the set aside lands were returned to their previous owners—and we’re not talking about the Native Americans.

“So, where is the redress for people of African descent in this deal. “ Saldana says with a laugh, “Imagine, we would have owned all of Georgia and South Carolina…”

Braves get swept by Phillies