Remember when Harlem was Black? 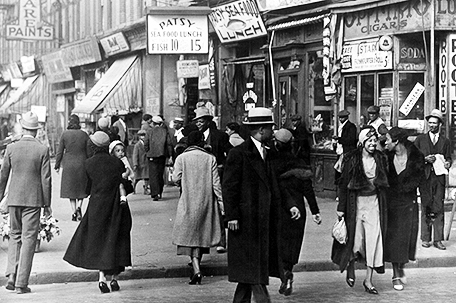 Last night I took a stroll down Frederick Douglass Boulevard in Harlem. What I saw shocked me. Sitting on stage at a new night spot near 116th Street was a young white woman singing “Sweet Home Alabama” to an all-white audience in an underground performance space.

White people singing about Alabama in Harlem? Yes, that’s the wave of the future in New York’s most famous African-American community. Don’t get me wrong. Diversity in entertainment options is desirable. But my question is how do you support new social and cultural options while maintaining the existing cultures in the community.

Most of us have known about the changing demographics in Harlem for awhile, but lately it seems abundantly clear which way the wind is blowing. Just a few mornings ago, I stood in a long line at Starbucks on 125th Street and realized every single person in line in front of me was white. That’s a type of gentrification that dramatically changes a community.

The trend lines have been moving for decades. As the New York Times reported four years ago, Blacks are no longer the majority of the population in greater Harlem. Even in the smaller area known as central Harlem, the Black population is lower than at any time since the 1920s, when an influx of African Americans dramatically altered the racial dynamics of the community.

But this story is not a complaint about gentrification, which, like any trend, has ups and downs. On one hand, the introduction of new, more affluent residents into older neighborhoods attracts much needed services, banks, bars, sidewalk cafés, restaurants, supermarkets, and shops.

On the other hand, gentrification typically pushes up real estate prices, pushing out affordable housing and low-market rental units. As a result, long-term residents get displaced as wealthier newcomers move in. Even long-term homeowners sometimes flee as rising property taxes become unaffordable.

I’ve seen this story play out before in Washington, D.C. Back in the 1990s, I lived in a nice apartment in a transitional neighborhood called Logan Circle. When the landlord offered to sell the row house for $300,000, I scoffed at the price and moved to New York. Not a smart financial move. Today, that same row house is worth $1.3 million.

Yet the real change in my D.C. neighborhood took place with the arrival of a Whole Foods grocery store at 14th and P Street. At first, I didn’t quite understand how Whole Foods planned to market its famously expensive products in a working-class D.C. neighborhood. But then I realized the grocery store would serve as the anchor for changes to come. And it did. A neighborhood that once saw sex workers cruising the streets at night has now been transformed into one of Washington’s most popular night spots filled with affluent, young white people.

The reason I recall my experience in D.C. is because this is exactly what seems to be happening in New York. At the busiest intersection in Harlem, at 125th and Lenox Avenue, workers have now broken ground on a new Whole Foods grocery store. This store will rise up in central Harlem, in an area that had no supermarkets at all until 15 years ago.

Believe it or not, when a Pathmark grocery store opened in 1999, it was Harlem’s first major supermarket in more than half a century, which even the New York Times noted at the time was “an astonishing fact” considering the population of the area was “roughly the size of Atlanta.”

As a former Washingtonian, I know how the Whole Foods story ends. Blacks leave. Whites move in. More services arrive. Property values soar. Then only the most affluent African Americans will be able to afford to move into the neighborhood.

That’s the future of Harlem in the next 10 years unless there’s a concerted effort by city government and local community leaders to maintain demographic balance in the years ahead. Both the city and its local elected officials need to be doing everything they can to develop and expand truly affordable housing and mixed-income building developments without the so-called “poor doors” that segregate the rich from the less affluent.

But community leaders also have a role to play. With creative leadership, neighbors and block associations might be able to pool their resources and purchase property of their own. And community banks and organizational lenders could provide microloans to local entrepreneurs and small-business owners underserved by traditional financial institutions.

Harlem is now a multi-racial, multi-ethnic community with a rich history and a vibrant social scene. I love the energy. Just last night I stumbled upon an eclectic group of young people at a pop-up art gallery space on Frederick Douglass Boulevard. I’d like to maintain that diversity in the neighborhood. But one fundamental question needs to be answered: How do you attract more of the new Harlem without pushing out most of the old Harlem?