Reflections of an NAACP voting volunteer and poll monitor 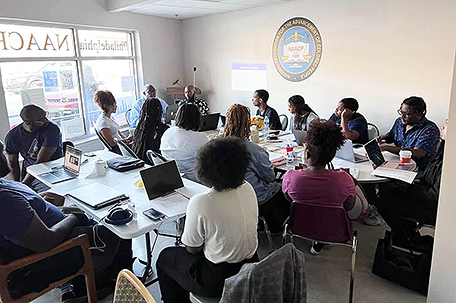 ABOVE PHOTO: Boiler Room poll monitors from Howard University on the job at the Philadelphia NAACP office.  (Photo courtesy of Phila. NAACP)

On Election Day, I had the opportunity to volunteer as a poll monitor under the guidance and supervision of the Philadelphia NAACP branch.  This is a nonpartisan position whose goal is to make sure that the polls in the city were working efficiently, correctly and legally, and to prevent or mitigate issues with the polls that arise.

There were two types of poll monitors: those in the “Boiler Room” and those in the field. Those in the Boiler Room — which is the call center, essentially — took calls from voters across the Commonwealth of Pennsylvania when they had questions about their polling places, voter registrations, and other concerns about Pennsylvania Law regarding voting and provisional ballots.

Local officials and leaders from the Pennsylvania General Assembly visited the Boiler Room monitors to observe their work and to express appreciation for their contribution to preserving democracy.

Poll monitors in the field were stationed at certain polling locations — like local libraries, schools, and some churches — and got the chance to ask and answer any questions the voters had when they finished casting their ballots. These types of monitors got the chance to get on-the-ground experience with resolving issues related to voting improprieties by reporting these issues into the NAACP database, where they would be considered for further, potentially legal action, and they even got the chance to be on the news.

I initially chose the Boiler Room and that is where I spent most of my time. However, closer to the end of the day, I was called into the field for two issues: (1) Mismatched voting machines in improper voting divisions that resulted in the illegal use of provisional ballots, and (2) voter intimidation. For the first issue, my team and I were the first on the scene and witnessed voters not being able to cast their ballots because the machines for one division were  completely down on the basis that they were “broken.” After about two hours and many calls later, the machines had been replaced and so the voters came back and were able to vote, without having to cast a provisional ballot.

For the second issue, a report had been submitted stating that a group of people were in front of a polling location telling voters that they should “Vote for [Doctor] Oz or else!” When my team arrived on the scene, the group had apparently fled, as there was no sign of them, but we did talk to some poll officials, who said they did not witness the intimidation but would have contacted us if they did. These experiences served as the background for my reflections on my time in Philadelphia.

Serving as a poll monitor in Philadelphia taught me the fragility of democracy and the strength of Philadelphia as a city and Pennsylvania as a commonwealth. Democracy is only as strong as the citizens’ will to fight for it, and from what I saw, Philadelphia’s citizens are more than willing to fight for not only democracy, but its foundational concepts: freedom and equality.

Many of the voters that I saw could have said “I am having too many issues with voting, I am just not going to vote,” and many people across the country probably did. However, what I saw was a drive and a devotion to their vote counting. Almost every person I saw who encountered faulty polls at their voting location told me “Oh, trust me, I will be back! My voice will not be silenced.” This not only reassured me that the work that I did and planned to do is important, but that the people of Philadelphia are not ready to forfeit or surrender their voices to anyone. After all the votes were counted on Election Day, it was reported that Philadelphia citizens voted in record numbers, and it is indubitably because of the motivation and resolve that I witnessed on Election Day.

Howard University School of Law’s mission statement is to (1) educate and enable students to develop their highest capabilities and skills as lawyers; (2) engage as an institution in the active pursuit of solutions to domestic and international legal, social, economic, and political problems that are of particular concern to minority groups; and (3) imbue its students with dedication to excellence and commitment to the solutions to those problems. It is my belief that there is no higher capability and skill as a lawyer than service to your community. In Philadelphia — where I had the opportunity to work on the front lines of a city with minority communities that are not only culturally rich, but also full of leaders who are directly involved with their communities every day — I was inspired to commit myself to that community service.

Voting rights is an issue particularly integral and important to minority communities in the modern day. Seeing Howard Law students present and able to analyze the legal implications of provisional ballots or voter intimidation issues that were presented to us on Election Day, and to be able to resolve those issues with efficiency and precision by using our logical reasoning skills, represented the importance of the second and third missions in Howard Law’s mission statement. It also satisfied Howard Law’s mission as an institution advocating and defending the rights of all, but particularly African American communities.