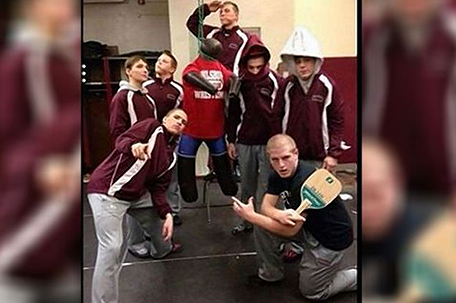 Are students to blame for racist behavior or is society ignoring the elephant in the room?

By Ricardo A. Hazell

Have you ever Googled the terms “racism” and “high school sports”?  Well, if you ever wanted to lose faith in humanity a few degrees more than you may have already, then a brief survey of the year’s most reported high school sports stories may change your view. Race this, and race that…yet, if some conservative pundits are to be taken at their word, race is supposed to be less of a factor today than at any point in the history of the American experiment.

In January, Fox News pundit Bill O’Reilly had this to say about the President Barack Obama’s relative disinterest or cautiousness when speaking on matters of race during both his terms.

“The truth is, that the race factor in America is not an overwhelming problem anymore. Mr. Obama won two elections. And although his standing among white Americans is now in decline that’s primarily because of the economy and Obamacare. It has little to do with race. Upon his inauguration in 2009, Barack Obama had a nearly 70 percent approval rating very high for any politician. That proves the USA has made dramatic improvements in the race arena. There is no question about it.”

So, according to O’Reilly and those of his ilk, the election and reelection of President Obama to the highest office in the land is proof positive that racism is no more and people should cease and desist using it as a catalyst or motive behind any behavior.  Well, if someone on Fox said it then it must be true, right?  Excoriating sarcasm aside, as an African-American male, there has never been a time in my adult life where I felt like racism was a thing of the past.

However, when it comes to the children of the United States of America, a callous attitude towards matters of race seems to be all the rage these days.

A stereotypically common response from an African-American mother or grandmother when faced with the prospect of unruly children is to admonish them with the phrase, “They act like they don’t have no home training.” Well, if recent racist behaviors exhibited by Caucasian high school athletes across the nation are to be used as a barometer, there is much home training to be administered to all ethnicities regarding race in America. I was always taught that race had no place in sports and that athletic, team competition is a prime example of people of different races, ethnic and cultural backgrounds banding together for a common goal. As children, the open-minded ideas of camaraderie, sportsmanship and brotherhood were surely drilled into the heads of most high school participants. But that does not appear to be enough in some circumstances.

In February, a group of New Jersey state champion high school wrestlers from Phillipsburg High were disciplined for taking a racist photo in which members used KKK imagery and a black wrestling dummy adorned in a Paulsboro High School t-shirt being hung by a rope wrapped around its neck. Philipsburg is 7.5 percent black, Paulsboro is 36 percent black.

On March 13, an all-white basketball team from Howell (MI) High School defeated the mixed-race squad fielded by Grand Blanc High School during the Class A regional final by a score of 54-49. One would think the win would have satisfied Howell students and alumni to simply celebrate a hard fought victory, but one would not be taking into account the emboldening effect social media has on stupid people. Tweets such as “All hail white power. #HitlerIsMyDad” and “Tonight was probably one of the most racist nights of my life. I heard so many slurs and expressions. I also said a few things…”

A very similar circumstance involving high school basketball fans and Twitter occurred north of New York City in Mahopac.  Several students were suspended after they sent racist tweets following a loss in the state basketball semifinals against local basketball powerhouse Mount Vernon. These are but a few of the many circumstances that have occurred in high school athletics over the past five years.

In all of the aforementioned circumstances, school administrators were on record as saying how wrong these actions were and that disciplinary measures were certainly being taken, but said discipline will likely do very little to assuage concerns of the rising tide of racism in high school athletics. It is easy for a child to feign ignorance about racial prejudice, but certain behavior is learned.

What of the adults whose teachings are often the catalyst for such behaviors?

Among the complaints were allegations of race-based bullying and demagoguery. Choe, a 2010 Coach of the Year in San Diego, is considered among the best in his region. As of press time, James Choe was still the boys’ basketball coach at Rancho Bernardo High School. When asked by ABC News 10 about any disciplinary actions the coach faces, the Poway Unified School District spokesperson said those matters “are not open for public record.”

Every year, the Washington Redskins and owner Dan Snyder are taken to task for the franchise’s usage of what some perceive as a racially derogatory term as its name.

During the ongoing argument regarding the appropriateness of the name, the ideas and sensibilities of people on both sides of the argument are brought into the light. Many conservative-minded Americans, both white and black, cannot comprehend why there has been so much outrage over the name of their favorite NFL franchise. For liberal minded individuals the case is clear, if the team was given a respectable name like, for example, the Washington Cherokees, the visceral response from the left would be dialed back considerably.

For me, the difference between Cherokee and Redskin is as easy for me to differentiate as the difference between a team being called the Zulus and the Spearchuckers. One is the name of an actual group of noble people, the other is a derogatory term that was once used to demean and belittle a group of people. So, why all the ambiguity from the NFL when this fact is brought up? Is it genuine ignorance or simply an unwillingness to change for the sake of comfort? One can never know for certain without the benefit of telepathy.

On Monday, Washington Redskins owner Dan Snyder announced the creation of a foundation, but to me it sounded like an attempt to clean up his image after repeated and vehement refusal to change the name of his team.

If such an influential owner of one of the NFL’s most lucrative and revered NFL franchises refuses to acknowledge blatant discrimination, then how can we expect the attitudes of overzealous and impressionable high school teenagers to be sensitive to race? Sports fans are aware of the history of Snyder’s franchise, but likely not the name. He made the announcement in a four-page letter posted on the Redskins Website. The act is said to be based on four months of research into what Native Americans thought of the Redskins nickname and logo, including visits by Snyder and his staff to 26 Indian reservations in 20 states.

“The more I heard, the more I’ve learned, and the more I saw, the more resolved I became about helping to address the challenges that plague the Native American community,” Snyder wrote. “In speaking face-to-face with Native American leaders and community members, it’s plain to see they need action, not words.”

One of Snyder’s biggest critics has been the Oneida Indian Nation of New York. Here’s what they had to say via spokesperson Ray Halbritter. The tone was professional but the wording was quite clear:

“We are glad that after more than a decade of owning the Washington team, Mr. Snyder is finally interested in Native American heritage, and we are hopeful that when his team finally stands on the right side of history and changes its name, he will honor the commitment to Native Americans that he is making today,” Halbritter’s statement read.

”We are also hopeful that in his new initiative to honor Native Americans’ struggle, Mr. Snyder makes sure people do not forget that he and his predecessor, George Preston Marshall, a famous segregationist, have made our people’s lives so much more difficult by using a racial slur as Washington’s team’s name.”

Athletic competitions and race have been intertwined for nearly 100 years and countless individuals have tried to determine the worth of one group of people over another based upon physical contests. In the modern age, people in the media and positions of authority tend to shy away from the realization that there are racists running rampant through all levels of sports – from Pee Wee football up through the NBA and NFL.

Perhaps some believe that admitting the existence of these individuals somehow takes something away from the purity of sports. But maybe that is exactly what is needed. Maybe realizing that sports are not insulated from society, but rather a reflection of all that is good and evil in humanity, will go a long way toward crafting a more thoughtful society. But, like noticing a ball of lint in your hair or morning crust affixed to an eyelash, we can’t spot what’s wrong unless we all take a good, long look in the mirror instead of ignorantly prancing around as if things are perfect and no change is warranted.