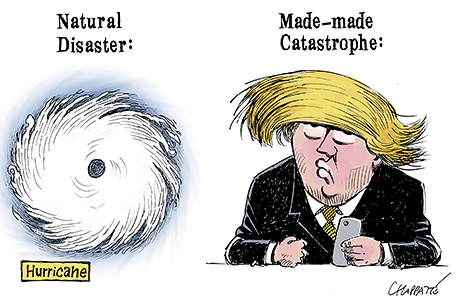 Hurricane Harvey did everything people said it would do, and more.  It either drowned or swallowed everything it touched in Corpus Christi, Houston, Beaumont, the gulf coast of Louisiana, and a bunch of other places.  Already, estimators say that Harvey may be our nation’s costliest disaster to date, costing at least $190 billion, or about 1 percent of our gross domestic product (GDP).  The damages are both individual – think of the uninsured person who lost her home, or the worker whose job has now been eliminated, and national – Houston is our nation’s fourth largest city, and an epicenter of the oil and gas industry.

That man who occupies 1600 Pennsylvania Avenue traveled to Texas with his $40 cap, available on his website.  His wife, who took two suitcases for the day trip, managed to switch jackets and caps, and come out of her lizard heels and into a pair of sneakers.  They let us know what was important to them – the “epic” hurricane, the size of the crowd gathered to see Trump (more likely, unemployed folks waiting for food or housing placements), and the “team”.  They didn’t tell a single soul that they empathized and would work to help.

No matter.  People came forward without being asked, contributing food, their boats, towels, clothing, and so much more.  In crises like these, we are reminded about the many ways we Americans come together, contributing to relief funds (please check them out before you send your cash), showing up to volunteer, opening up homes and more to help.

What role must policy play in the aftermath of Hurricane Harvey?  For one thing, we must define and refine the role of government in times of disaster like this.  Government clearly dropped the ball with Hurricane Katrina, and some of the lessons from that tragedy have been applied in Houston.  At the same time, General Russel Honore, the hero of the Katrina debacle, said that in the twelve years since Katrina, so much more should have been done around preparation for a natural disaster.  Why haven’t we done the work? Often, we’ve been penny-wise and pound-foolish, choosing to cut expenses while incurring even greater costs.  And if 45 has his way, we’ll be cutting even more.  The budget he submitted to Congress cuts FEMA, the National Weather Service, and other agencies essential in responding to crises like Harvey.

I never ever thought I’d say it, but New Jersey Governor Chris Christie has a point.  You don’t get to rail against disaster aid when it is going to someone else’s state, but demand it when your state is impacted.  Texas Senator Ted Cruz was not wrong, he was dead wrong in voting against relief for those who survived Hurricane Sandy.  And now, he is revealed as a craven hypocrite when he wants more for Texans than he offered to residents of New Jersey.

Either we will step up in crises or we will not.  And if we step up, we need to step up for everyone.  Harvey did not discriminate.  It swallowed the expanse of mansions, even gated ones, as well as the small apartments of uninsured working class folks.  Only one in six of those affected by Harvey were insured because premium costs rose quickly, forcing some families to pay as much as $2,000 a year, even as they earned relatively low wages.  If we step up, we have to step up for everyone, not just those with sterling documentation and the right insurance.

What is our nation of a nation?  Do we believe that all should be protected from catastrophe?  How do we implement such beliefs?  And with a tone-deaf narcissist leading our nation, how do we transcend our terribly flawed leadership to adhere to our ideals?

45 has been wreaking havoc in our federal government.  He has rescinded provisions that help workers, increased the possibility of police brutality with new rules about police departments getting war weapons, and shattered the dreams of immigrant young people who desperately need DACA forbearance to stay in this country.  More than that, his messages about shrinking the size of government are discordant with the message about government stepping up to help people in Houston, Louisiana, and now Mississippi.  In the weeks after Harvey, it is imperative for us to examine public policy toward those affected by our nation’s tragedies.  Cutting the size of some government agencies decreases our ability to respond to disasters like Harvey.

Julianne Malveaux is an economist, author, and Founder of Economic Education. Her latest book “Are We Better Off: Race, Obama and Public Policy” is available via Amazon.com. For booking, wholesale inquiries or for more info visit www.juliannemalveaux.com