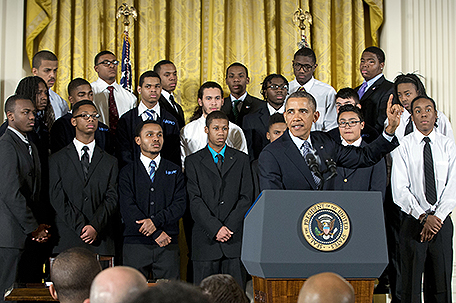 ABOVE PHOTO:  President Barack Obama gestures during an event in the East Room of the White House to promote his “My Brother’s Keeper” initiative, on Thursday, Feb. 27, 2014, in Washington. Joined at the White House by young men of color, Obama called on America’s businesses, philanthropists and government leaders to join forces to put more boys on a path toward successful lives. Foundations were to announce pledges to spend at least $200 million over five years to promote that goal as Obama launches his “My Brother’s Keeper” initiative.  (AP Photo/Pablo Martinez Monsivais)

President Barack Obama made it perfectly clear why he got more than a little emotional when he announced his “My Brother’s Keeper” initiative.

He was one of those brothers who but for his initiative, luck and a good support system could have easily slid into the spiral of poverty, drugs, violence and possibly jail or an early grave.

That spiral has trapped, and slammed countless poor, minority and especially Black males.  President Obama challenged government, corporations and foundations to kick in millions in funds and resources to deal with the minority male crisis. While he also challenged minority males to take responsibility for their lives, he recognized that no matter how motivated an at-risk male is that won’t demolish the rock-like institutional and societal barriers that confront black males all by themselves.

The biggest of all is the staggering jobless rate among young Black males, and much more. They are not just jobless; they are also in mortal danger of becoming job untouchables. Their Great Depression unemployment rate didn’t budge, not even during the Clinton-era economic boom in the 1990s. The unemployment rate for young Black males was double, and in some parts of the country triple, that of White males. Discrimination, racial profiling, failing public schools and broken homes are the easy answers to try and explain the high unemployment numbers.

But that’s not the total answer. During the past decade, the relentless cutbacks in state and federal job training and skills programs, the brutal competition for low and semi-skilled service and retail jobs from immigrants, and the refusal of many employers to hire those with criminal records have sledgehammered Black communities. In the late 1990s, long before the big run up in Black unemployment, the California Assembly Commission on the Status of the African-American Males reported that four out of 10 felons entering California prisons are young Black males. That number is repeated in other states. Despite the slight tick up in the number of Black two-parent households, less than half of lower income Black males under age 21 still live in two-parent households.

The high number of miserably failing inner-city public schools also fuels the unemployment crisis. They have turned thousands of blacks into educational cripples. These students are desperately unequipped to handle the rapidly evolving and demanding technical and professional skills in the public sector and the business world of the 21st century. The educational meltdown has seeped into the colleges. According to an American Council of Education report, in the past decade Latino, Asian, and Black female student enrollment has soared while Black male enrollment has slowed down.

The negative racial typing has also spilled over into school discipline. Studies show that though Blacks make up less than 20 percent of public school students, they comprise nearly one out of three students kicked out of the nation’s public schools.

But there’s another reason for the endemic joblessness among the brothers and the attendant spin-off problems of crime, drugs and violence from the forced idleness and hopelessness that conservatives and far too many others delight in victim blaming Black males are loath to admit. While it’s true that many employers refuse to hire them because of racial fear and ignorance, the unstated, but real perception is that many young Black males are inherent drive-by-shooters, gang bangers, drug dealers, are lazy, have foul attitudes, are chronic underachievers and eternal menaces to society. When some young Blacks turned to gangs, guns and drugs and terrorized their communities this seemed to confirm their worst fears.

The explosion of gangsta rap and the spate of Hollywood violence themed ghetto films have convinced even more Americans that the thug lifestyle is the Black lifestyle. It makes little difference whether a young Black is a Rhodes Scholar, a National Science medal winner or junior achievement candidate, he could easily be tagged as a gangster. The gunning down of Trayvon Martin and Jordan Davis were blatant examples of how stereotypes and negative typecasting of young Black males can have deadly consequences.

In the past few years, a rogue’s list of rappers have been assaulted, murdered or run afoul of the law. They revel in the bad actor lifestyle and play hard on the us-versus-them volcanic rage of many young Blacks. They reap a king’s ransom from exploiting the violent, outlaw image of Black life. Some young, Black men reinforce the damaging racial stereotypes by aping and exulting the thuggish bluster and behavior of gangster rappers. This further confirms the lurking suspicion among some employers that all young Blacks must be criminal and derelict, and that it’s risky business to hire them.

President Obama’s public challenge to foundations, government and business to do more to end discrimination and create more job and training opportunities for young minority and Black males is a good start. But the barriers that President Obama spoke of won’t fall until Americans see the brothers that he urges the nation to keep out of harm’s way are worthy to be kept and not brothers to be scorned.