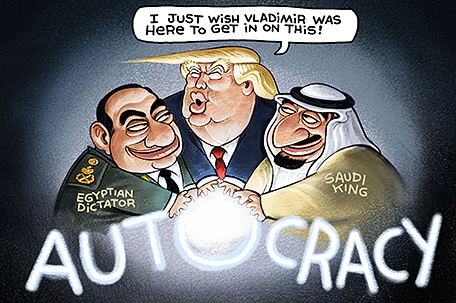 The facts are as follows:

Donald Trump, the six-time bankrupted “business man” ran for president as a non-conformist, non-political, outsider.  He fanned the flames of nationalism, xenophobia, racism, misogyny and anti-Muslim bigotry to capture the hearts and minds of a disenchanted, anti-status quo electorate. His message of hate resonated with this part of the electorate as backlash to the election of America’s first African-American president.

Historically, once a presidential candidate is elected, he quickly shifts from campaign mode to governing. He broadens his message and appeal in an attempt to unite the country.  Trump’s inability or unwillingness to pivot away from his hyperbolic rhetoric is a clear indication that he has no interest in uniting the country.

The Founders created the Executive Branch as one branch of three separate but co-equal branches of government. Trump appears to have no interest in “equal” and even less interest in governing. He wants to rule.

As of this writing Trump has signed 34 Executive Orders and 28 bills.  This may appear to be significant until one realizes that most of the 28 bills are for administrative acts such as appointing board members to the Smithsonian Institution and designating locations for national memorials. He has failed to meet his legislative campaign promises. His Muslim “ban” has failed in the courts three times. His pledge to repeal and replace the ACA initially failed. It finally cleared the House and has made its way to the Senate where it is dying a slow and painful death.  His single “success,” the Gorsuch confirmation to the Supreme Court only came after the Senate changed the rules by employing the “nuclear option.”

Trump has persuaded his followers that he will “make America great again”.  This will be quite a challenge since he and his henchmen like Steve Bannon and Jeff Sessions are working to undermine the very foundations of American democracy. Bannon promotes capitalism over a constitutional democracy, and Sessions lied before Congress about meeting with Russian officials. Sessions also, according to The New York Times, called the Southern Christian Leadership Conference and the NAACP “un-American”.

So, how exactly did a country that is still the envy of the world fall victim to the lies and machinations of a “wanna-be” dictator like Trump?  As a result of the economic collapse of 2008, ineffective domestic policies, seventeen consecutive years of war, the continued and hyped threat of terror and a racist reaction to the election of Sen. Barack Obama, the die was cast. According to Jim Powell in Forbes, “…when people become angry enough or desperate enough, sometimes they’ll support crazies who would never attract a crowd in normal circumstances.” 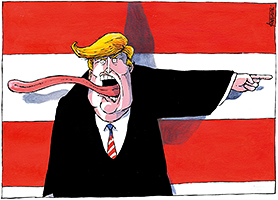 Psychologist Lawrence Britt developed 14 characteristics of dictators and fascist of which Trump exemplifies quite a few. According to Britt, “Fascist regimes tend to make constant use of patriotic slogans…” Trump pledged to “Make America Great Again” and called for “American hands” to remake the country. Second, “Identification of Enemies…as a Unifying Cause “ – we are all too familiar with Trump’s racist, anti-Muslim and xenophobic rhetoric. Third, “…the military is given a disproportionate amount of government funding, and the domestic agenda is neglected.”

Trump has pledged to “rebuild the military” even at the expense of continuing to bankrupt the country and has also proposed deep cuts in public school funding. Fourth, “Controlled Mass Media” – Trump has threatened to cancel White House press briefings; demonized the media and created “fake news” and “alternative facts.” Finally, “Disdain for Intellectuals…” – Trump’s famous statement, “I love the uneducated.”

Trump has worked closely with those who have worked closely with some of the worst dictators in modern history. He hired veteran Republican strategist Paul Manafort to be the chairman of his presidential campaign. Manafort seems to have never met a despot or dictator he could not help.

According to Time Magazine Manafort’s firm (Black, Manafort) helped to polish the image of Angolan guerrilla leader Jonas Zavimbi. Manafort’s firm worked to rehabilitate the image of the dictator of Zaire, Mobutu Sese Seko.  In 1985, Manafort worked with Philippine dictator Ferdinand Marcos. And then there’s his work with the Russians — oh, those pesky Russians. According to NPR, “…Manafort’s most important client was the pro-Russian Ukrainian leader Viktor Yanukovych… Anders Aslund of the Atlantic Council says Manafort made millions from his work in Ukraine.”

Trump has demonstrated distain for the judiciary. He infamously said that Judge Gonzalo Curiel is biased because of his Mexican heritage. He also accused the judges who overturned his Muslim ban of playing politics. He Tweeted, “The opinion of this so-called judge, which essentially takes law-enforcement away from our country, is ridiculous and will be overturned!”

A special counsel has now been assigned to look into the Trump campaign’s association with Russia. Included in this investigation will be whether or not Trump asked former FBI director James Comey to close the investigation of Michael Flynn. Comey alleges Trump said, “I hope you can let this go,” and then fired Comey shortly after he asked for additional funds to complete the investigation.

Britt also writes that another trait of dictators and fascist is that they protect corporate power and there is “Rampant Cronyism and Corruption” in their regimes. Trump’s promise of deregulation and plans to cut taxes for corporations and the rich are examples of how Trump serves the oligarchs… the few, the powerful, the wealthy.

In terms of rampant cronyism, Trump’s son-in-law and daughter yield unprecedented access and power. They have refused to distance themselves from their business interests.  In fact, according to ‘The NY Post,’ “China approved three trademarks for Ivanka Trump’s jewelry and spa brands the same day she and her husband, White House adviser Jared Kushner, sat down for dinner with the Asian country’s president… President Xi Jinping…” Coincidence?

Trump’s proposed repeal and replacement of the ACA is actually a tax break for the wealthy.  According to The New York Times, “It offers billions of dollars’ worth of tax cuts …The cuts amount to nearly $1 trillion over a decade. The beneficiaries would be the richest Americans…” who, since its inception, have complained that the Affordable Care Act unfairly burdened them with the responsibility of subsidizing insurance for the poor.” What ever happened to John Lock’s founding principle of the social contract theory? A persons’ moral and/or political obligations are dependent upon a contract or agreement among them to form the society in which they live. And they call themselves Christians?

We see in President Trump exactly what President Dwight D. Eisenhower warned us against, “…the disastrous rise of misplaced power…” Lastly, dictators lie. According to Politifact, 83 percent of President Trump’s statements range from “Half-True” to “Pants on Fire” false.  He has created an environment that allows him to attack his enemies (anyone or any news agency who disagrees with him).

America has elected a president that’s a “wanna-be” dictator for the oligarchs.