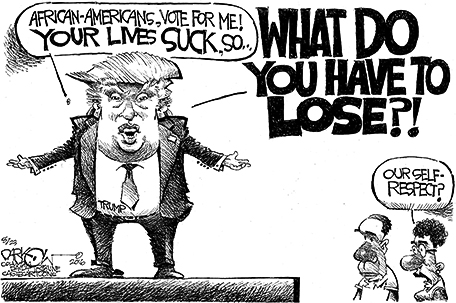 Here’s the selected checklist of black organizations, groups and individuals GOP presidential candidate Donald Trump has flatly refused to speak to, reach out to or even acknowledge exist. They include: The NAACP, the National Urban League, The National Association of Black Journalists, Black Pastoral groups, and a host of Black business groups and entrepreneurs most recently in Detroit. His cold-shoulder of Blacks has even puzzled Gregory Cheadle, the man that Trump has famously called “my African American.” Cheadle, like many Blacks within and without Trump’s campaign, have begged him to at least make some nod toward Black voters.

He hasn’t and won’t. There are good reasons why he shouldn’t. He’s worked too hard to get his poll reading of 1 percent of Black voter support to all of a sudden risk that by giving some face time to a few Black groups. He’s worked harder than any GOP presidential candidate since maybe Ronald Reagan in 1980 to ensure that Black voters play the “invisible man and woman” for him at the polls.

His 1 percent Black support reinforces his pitch to his most rabid backers, they are fearful, and conservative white blue collar workers, and a solid slice of equally frustrated white middle-class suburban voters. They are the ones who pack his mass rallies, and scream at and about liberals, belt way politicians, and President Barack Obama, tanking the economy, cutting unfair trade deals with China, eviscerating their working and middle class living standards, giving away the company store in entitlements to minorities, and turning America’s borders into sieves for any and every immigrant type to illegally sneak in. The few Black faces that turn up at his rallies seem to be either bought and paid for acolytes or are there to disrupt.

Then there’s Trump’s history. He didn’t burst onto the nation’s and the media’s political radar scope and then claw his way to the top of the GOP presidential heap by making nice with Blacks. He did it by baiting, hectoring, and name -calling Blacks. His victims and targets have been prospective Black renters who he refused to rent too at his apartment complexes in the 1970s, the one-man crusade he waged to plop the Central Park Five in the gas chamber, the relentless “birther” smearing of President Obama, and his gleeful name calling and insulting of him.

There’s a crude, cynical and calculating but simple method to Trump’s racial nose thumbing. He banks that this will be the big motivator to get the estimated 60 plus percent of the white vote that he’ll need to negate the locked down overwhelming majority backing that Clinton will get from Black, and Hispanic voters in November. He’ll also need to pad that by getting disaffected ultra-conservatives, right- wing evangelicals, and unreconstructed bigots back to the polls. Many of whom sat out the last two presidential elections because they just couldn’t stomach what they considered the “moderate” pabulum that McCain and Romney dished out.

Now GOP presidents and presidential contenders Nixon, even Reagan, and Bush Sr. and especially W. Bush took great pains to give the appearance that they were not overt racists, and that naked racism was not part of their appeal. This included highly orchestrated, stage managed, photo-ops with Black celebrities and sports figures, a handful of key Black pitch men and women on the campaign trail with them, and having a pack of show piece, African-Americans to provide entertainment and perfunctory speeches at Republican conventions.

Trump doesn’t want or need that, because it flies in the face of the narrative and the image that he’s crafted for his campaign, which is stuffed with the GOP’s standard use of racially loaded code words and attack points.

This has all been frustrating and puzzling for Trump’s small and long suffering African American outreach contingent. They’ve also implored him to take a few moments and show up at and say something nice to a Black gathering now and then. They get the same brush off. Trump may eventually have another highly publicized smiling and back slapping photo-op or two at his Trump Tower suites with a few hand-picked Black ministers and personalities. This will be his way of saying that though I won’t do anything to get another digit of Black support, I’m not really a racist. He’ll shrug off the predictable and expected savaging he’ll get for it from civil rights groups and Democrats, since the photos weren’t intended to make nice with Blacks anyway.

A guess though is that despite Trump’s countless signals that Black voters aren’t and must not be in his campaign equation, he’ll still get calls and requests to show up at Black gatherings. That’s because many just can’t believe that in 2016 a major party presidential candidate could not only not make even a feeble attempt to get a few Black votes, but run from those votes like the plague. Trump is that candidate, so stop pestering him to say something to Black voters.