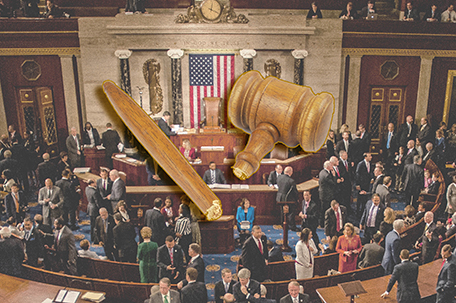 House Minority Leader Kevin McCarthy is finding out the hard way that getting someone elected to office doesn’t guarantee loyalty. Especially if they’re crazy.

As I write this column on Republican House Majority Leader Kevin McCarthy’s thwarted efforts to become Speaker of the House, the House has adjourned for the night.

I guess that taking six votes for the office over two days and coming real close to electing House Minority Leader Hakeem Jefferies Speaker instead, makes folks want to go home, order a half-smoke and some chili fries from Ben’s Chili Bowl on GrubHub, and come up with a Plan B.

Before the ink was dry on the vote certification papers for the midterm elections, members of the so-called House “Freedom Caucus” were telling anyone who would listen, that McCarthy didn’t have the 218 votes needed to take the gavel from current Speaker Nancy Pelosi, something that I’m sure she appreciates, because he expressed a desire to hit her with it.

Not even his 2020 election denial creds and the endorsement from former President Donald Trump that came with them appear to be helping him out here. In fact, the “Freedom Caucus” put up another candidate, U.S. Rep. Bryan Donalds of Florida for the office. They’ve split the vote at least four times.

You would think that after procuring the House of Representatives for a caucus that includes more than a few members — most notably Lauren Boebert, Matt Gaetz and Marjorie Taylor Green — that shouldn’t be running a dog park, much less a branch of government, McCarthy would be golden.

But he’s learning a lesson that several Speakers of the House had to learn the hard way: To the “Freedom Caucus,” cannibalism, especially of their own, is always on the menu.

Now, what do I mean? The far-far-righters that make up the “Freedom Caucus” have been a part of Republican politics since, well, forever.

But the only one who managed to use them toward their own ends without being destroyed in the process was former President Ronald Reagan. That’s because while he had no problem giving the members of the Christian Coalition anything they wanted, he didn’t give them any control of his agenda or the Republican Party.

When former President Barack Obama was elected, and the brains of white men everywhere broke in half, then Rep. John Boehner, searching for a way to make the life of the nation’s first Black president as miserable as possible, glommed on to what became the Tea Party Patriots, but instead of using them like Reagan did, he gave them power. Lots of power. So much power, in fact, that they forced him into retirement.

They gave it to Paul Ryan, who retired from Congress after finding out that the Freedom Caucus, which is what the Tea Party Patriots morphed into, was going to be hard to control. But not before passing the kind of tax cuts that lead to large deficits and sending a bill to President Obama to get rid of Medicaid that he subsequently vetoed.

And now, McCarthy is on the menu, and finding that the knives cutting into him are pretty sharp.

It’s hard to feel sorry for him. You play stupid games, you win stupid prizes.

But in the end, while McCarthy will probably be able to spend the next two years in Congress threatening to hit Nancy Pelosi with a gavel, the country is going to lose.

Because what this shows is that the organized, well-oiled machine of destruction that used to be the Republican Party no longer exists.

While Reagan did things with our government that continue to make things harder for marginalized communities and that took years for us to recover from financially as a country, he and the Republicans he controlled at least knew how government worked.

The current crop doesn’t know that…and appears to be proud of it.

So, if the Speaker of the House election is any indication, this may be a long two years for America.

But, it should be profitable for Ben’s Chili Bowl…

Control of Congress: What’s at play in the 2022 midterms?

Congress marks 400th anniversary of slaves arriving in US