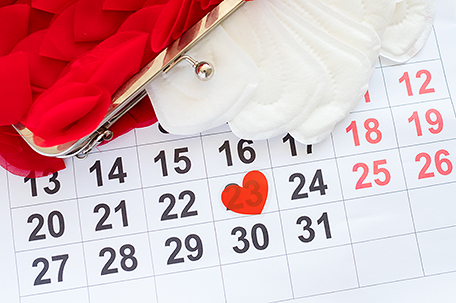 I hate periods. Not the ones that come at the end of a sentence though. No, I love the curtness that those represent… I mean the thing that comes once a month to remind women that they’re not pregnant.

Whether you call it “Aunt Flo”, “TOM”, “Code Red”, or simply just a “period”, every person’s experience with menstruation will vary, even if only slightly.

The first time I’d heard the word “period” used out of its ubiquitous context, I was eight. I had no idea what it meant, I just knew that it had nothing to do with grammar and everything to do with being a “woman.” I surmise this feeling is akin to how most men feel about the subject (unless of course they’re a gynecologist).

Like most other menstruators, I was taught that periods were dirty; something to hide, something to be ashamed of. Perhaps my feelings on nature’s gift may be rooted in the misogynic ideology that has been programmed in most of our brains, but most of my hatred is a product of the endless capabilities that my secret friend withholds in her clutches.

We live in such a patriarchal society that I’ve made it a point to never allow my thoughts or my writing to completely revolve around the male species, but this piece is just as much for men as it is for women.

I won’t speak on myself too much, BUT, I can admit that I can be quite the terror during the week leading up to my period. During that time, I’m exhausted, hungry, feel fat, and often feel like I “literally just can’t”.

Generally speaking, the people whom I deem closest to me are usually the brunt of my temporary mental instability, but through no fault of their own… or at least not fully.

It’s rare that you see women talk about their period with men, or even at all. I remember being in the car with my dad a few months ago. I needed tampons and I needed them ASAP, so I asked him to drop me by a nearby Rite-Aid. When he asked me what I needed to get, I immediately turned into Bambi, and the only word I could think of was “pens.” I’m 23.

A few days ago while talking to a close male friend, he all but called me stone and told me that I was “too old to blame my bad attitude on my period.” Immediately, I elevated from the ground to the rostrum, calling him both ignorant, sexist, and everything in between (some externally and some inward), but after thinking about his sentiment, I realized that he wasn’t necessarily at fault for his ignorance. How could he be? Periods have been considered a consensual taboo for so long, why would he know?

So now I am here, to talk about the unthinkable, because it’s important that those sorts of notions are dismantled.

Honestly, I often find having a period unfair. Sometimes it even feels like a punishment to me… for what? I don’t know, but it does. And it’s never simple. It’s the week before, the week of, and the week after that feels like a torture chamber of womanhood. Logistically speaking, this means that there’s only one week out of the month that we have to be completely okay, and god forbid we have anything else going on that’s already daunting as is; There goes a whole month of potential glee, wasted on hormonal imbalances and unfounded feelings on inadequacy.

The anguish associated with the “scarlet letter” can be unbearable — so much so, that the discussion of paid/non-paid menstrual leave has been a hot topic for years. I could use one of those days right about now.

Cramps. Lethargy. Bloat. Imbalance. Mood swings. Tears. Breakouts. Soreness. Irritability. Foods you know you shouldn’t eat, are all by-products of my unwelcomed visitor… On my worst days, it feels like I belly wormed down a path of cobble stones, glass shards, and hot iron. I’m not being dramatic, that’s really how it feels. Or imagine if heat miser created his own version of precipitation and is now showering you with unwarranted “affection,” that’s how it feels when even the slightest strand of hair touches me. And to think, such an ugly treasure-trove, gifted by nature, will last you through puberty and take you straight through full-blown adulthood.

You may think that because periods last for a great percentage of our lives that we’d get used to it. Fake news. While every month is the same thing, it often brings a varying degree of symptoms along for the ride. Sometimes it’s short, other times it lasts a lifetime. Sometimes its heavy, sometimes it’s hard to notice at all.

Question. Have you ever thought about the things women must spend money on that men do not? (i.e tampons, pads, bras, etc.)? Yup.

One month it’s bloating, another is cramping and often, it’s a lethal combination of both along with a few side-eyes and head-turning mood swings. In our moments of complete meltdown, don’t tell us we’re being mean or harsh, instead, try to understand that every day for the better part of a week, it feels like we’ve being ripped open from the inside out.

It is my hope that one day, society will be more open to discussing the impact of periods and realize that the feminine is beautiful and not something to be afraid of. But until then, if you see me randomly in tears with a large order of BOTH mozzarella sticks AND fries, just know that at some point, I will be released from the grueling hands of nature, and will return to my normal friendly, energetic, personable self as soon as I can.