Partial police tapes are too little, too late 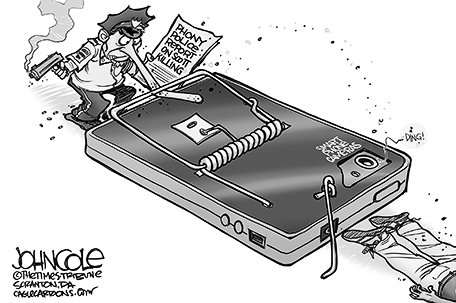 Keith Lamont Scott was killed by a police officer on Tuesday, September 20, in Charlotte, North Carolina.  The officer, dressed in civilian clothing, said that Mr. Scott had a gun and that he did not follow verbal orders to put his hands up.  While there is videotape that documents the interaction between Scott and Officer Brentley Vinson, Charlotte-Mecklenburg Police Chief Kerr Putney had, as of Thursday of that week, declined to release the tapes because there was “no compelling reason” to do so.  By Saturday, public protest along with a disturbing tape released by Scott’s wife, provided a compelling reason.  Still, Chief Putney released just two short snippets of the shooting and indicated that more videotape was being withheld.

The compelling reason for the Charlotte police to release all of the videotape is because there is a significant difference between what they say happened and what the Scott family says.  The police say that Scott had a gun; the family says he was in his car reading a book and waiting for one of his sons to come home from school.  Having reviewed the tapes, the family says it has more questions than answers.  Allowing others to see the tape will likely raise more questions, but it will also close the trust gap.  Failing to release the full video suggests that the Charlotte police have something to hide.

Releasing tape snippets seems like appeasement, like the drip, drip, drip of the police trying to make a case.  The North Carolina NAACP, the ACLU, and many others have called for release of the all the tape, but the police chief has dug his heels in.  Does he have something in common with Rahm Emanuel, the Chicago mayor who clamed there was nothing to hide on the Laquan McDonald tapes.  They were released more than a year after his murder, and they contradicted the police version of his killing.

We didn’t have the luxury of tape during enslavement, yet we know that horrors were visited on Black people.  Slave owner journals, along with some of the implements of torture that have been discovered (and may be displayed in our new Museum) document the horrors, but imagine having tape of it.

We don’t have tape of lynchings, although there are pictures of those lynched, though they are conspicuously absent in many history books.  We don’t have tapes of Rosewood or of the evisceration of Black Wall Street.  Indeed, the carnage that economically envious whites visited on a successful African American community is so shameful that white Tulsans have attempted to erase the record of their cowardly acts – the newspaper articles that recounted white cowardice went missing decades ago.

We don’t have tape of the police brutality that caused so many Black deaths in the early and mid- twentieth century.  We know the brutality existed, and we know police officers were never charged “back in the day” for killing or torturing Black people.  The fact that we didn’t have tape then contributes to the urgency that we get tape now.  I don’t know what the tape shows, but I know that I don’t want to leave it to my imagination, and I don’t want a minute here, two minutes there, when we know cameras should have been running for much longer.  When another black man is shot and killed and the police version is that he had a gun, the public deserves to see if the tape backs that version up.

If there is a video record of a police interaction with an African American, it ought to be released, and it ought not to be edited.  Failure to do so fuels the anger that spilled over onto Charlotte streets on the evenings of September 20 and 21.  Once the family saw the tapes and shared their concerns, people were back on the streets on September 22, but they were peaceful, and the atmosphere was much less tense than it had been.

There is a marked contrast between the behavior of the police establishment in Tulsa and that in Charlotte.  In Tulsa, videotape was released just a couple of days after Officer Betty Shelby shot Terence Crutcher.  Not a week had passed before the officer was charged with first-degree manslaughter, based on what prosecutors saw on the tapes.  People in Tulsa have been outraged, but peaceful.   People in Charlotte feel outraged, but also hurt and betrayed.

It is interesting that Rykeyia Scott keeps telling the police that her husband has no weapon, even as the police keep insisting that he drop the gun.  Is this a set up?  An Amadou Diallo moment (when a wallet was mistaken for a gun)?  Something else.  There is a compelling reason to release all, not just snippets, of the tape of Kevin Scott’s killing.  It is an opportunity to build trust and to show that the Charlotte-Mecklenburg police have nothing to hide from those they are sworn to “serve and protect”.