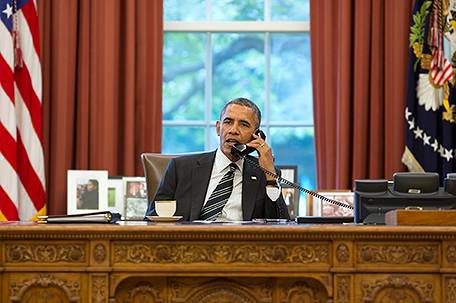 President Barack Obama’s slumping approval numbers seem to confirm the belief that second term presidents run into trouble, sometimes big trouble, in trying to hold it together during their second term. In Obama’s case, the NSA spy debacle, the lingering anger over Benghazi, the AP leaks, and the big contentious issue, the worry over the Affordable Health Care Act website glitches and possible rising insurance costs has raised deep concerns that the supposed two term hex will make his administration even more vulnerable to GOP attacks.

But Obama’s alleged bungles hardly add up to an indelible second term curse. Past presidents have certainly had their share of second term woes. This was the case with Eisenhower, Nixon, of course, Reagan, George H.W. Bush, Clinton and George W. Bush. This shouldn’t surprise. They were in office for a relatively long time. They run a big sprawling government with thousands of appointees and personnel. It is simply beyond the pale of one person to control every facet and decision their appointees and personnel make.

Just as time can work for a second term president, it can also work against him too. The longer he’s in office, it’s almost assured that some issue, event, or catastrophe will happen that can mar a president’s image, and that he may or may not have any real control over. The uncontrollable factors are a recession, a cataclysmic natural or human made disaster, or a major scandal. These are tests and the public watches closely to see how a president handles the situation. A real or perceived fumble will quickly taint him as a man that’s incapable of handling a crisis. The president’s popularity ratings just as quickly tumble when that happens.

Then there’s the other party. It has an inherent vested interest in seeing a president stumble. The GOP has gone much further to hammer Obama. It has not been content to sit back and wait for a crisis or policy flub to embroil his administration. It’s done everything humanly possible to try to insure that Obama is a failed president, even announcing that that’s its sworn aim. That mission started long before the GOP went to war against him over the health care act, the budget, the deficit, the debt limit, appointments, unemployment insurance extension, and job creation programs. Any initiative no matter how picayune has been fair game in the GOP’s campaign of delay, hectoring and obstruction of Obama’s program.

It’s no accident that more often than not a president’s party will lose control over one sometimes both houses of Congress after a president’s triumphant reelection bid. Obama is no exception. The GOP solidified its control of the House in the 2010 mid-term elections. That’s been a launch pad for its prolonged campaign to torpedo virtually every Obama legislative initiative. The game plan is to take back the Senate in 2014 and render Obama’s legislative program on immigration and tax reform during the remainder of his term a shambles.

Then there’s the crisis of public expectations that confront a second term president. The mere fact that he got reelected stands as testament that a majority of voters not only see him as fit for the office, but that he did a reasonably good job in governing. The expectation then is that he will not only continue to govern well, but even better. The two great measures of that is the economy and war. George W. Bush hit the skids the second go round because of public souring on a failed, flawed, and financially and human draining war, and a financial collapse.

Obama does not have that problem. The economy has shown clear signs of recovery and there is no war to drag down the administration. The only thing aside from the GOP warfare against him, is the policy question of the implementation of the health care act. This has been the major source of his approval ratings plunge and the incessant talk of a second term curse. But other successful presidents have had policy or personal debacles that have mired them in controversy after a big reelection win.  FDR got hammered for his attempt to pack the Supreme Court in 1937. Clinton was reviled for his conduct in the Monica Lewinsky affair. Their popularity numbers eventually recovered. FDR won a third term, and Clinton’s approval ratings soared and he continues to be rated one of the most successful president in modern times.

Obama to date has accomplished far too much in the face of far too much adversity. To try and stamp his administration with the label of failure is a horribly bad overplay of the supposed presidential second term hex.

Why so many white men still don’t like President Obama