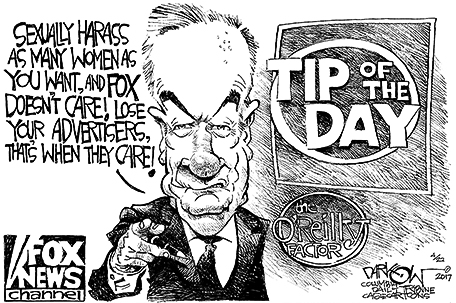 Ousted and disgraced Fox News host, Bill O’Reilly’s Blatant anti-black cracks, digs, slurs and putdowns didn’t start last year, two years ago, or even a decade ago. They started almost from the day that he took the helm of the “Factor” the last century. O’Reilly kicked things off with this zinger in early 1999, “Will African-Americans break away from the pack thinking and reject immorality – because that’s the reason the family’s breaking apart – alcohol, drugs, infidelity. You have to reject that, and it doesn’t seem – and I’m broadly speaking here, but a lot of African-Americans won’t reject it.”

With this quip, he tapped all the vile, ancient set stereotypes about Blacks, crime, drugs, immorality, and rotten families that supposedly explain why Blacks are stuck in crumbling ghettoes and wallow in poverty. O’Reilly repeatedly came back to variations on this theme time and again in the years to come.

On Black athletes, “Look, you know as well as I do most of these kids come out and they can’t speak English.”

On Black high achievers, “Does anyone know where the Best Men are? I hope they’re not in the parking lot stealing our hubcaps.”

On mocking Black leaders, ‘Oh, I can’t get a job. Whitey won’t let me,’ or ‘I can’t get educated. The teachers are bad, so I’m going to go out and get high and sell drugs. That’s the only way we can make money here.’ You know what I mean? And it’s a vicious cycle”

On Trump’s pledge to create more jobs for Blacks, “Many of them are ill-educated and have tattoos on their foreheads, and I hate to be generalized about it — but it’s true. If you look at all the educational statistics, how are you going to give jobs to people who aren’t qualified for jobs?”

On Black girls and pregnancy, “Young girls are getting pregnant in the African- American community.” “Now it’s about 70 percent out of wedlock. She knows and doesn’t seem to care.”

On Black children, “Now, the race hustlers who apparently have not walked the streets of poor neighborhoods lately, immediately accused me of racism. And that is why the acute problem of cultural deprivation among under-classed children of all colors is never addressed.”

On Black crime, “There is a violent subculture in the African-American community that should be exposed and confronted.”

On Freddie Grey’s slaying, “Freddie Gray’s lifestyle for many years, led him to this terrible thing which is not only impacted him and his family but all the police officers and that lifestyle should be condemned.”

On the Black condition, “Don’t abandon your children,” “Don’t get pregnant at 14. Don’t allow your neighborhoods to deteriorate into free-fire zones. That’s what the African-American community should have on their T-shirts.”

On Africa, “I’ve been to Africa three times. All right? You can’t bring Western reasoning into the culture. The same way you can’t bring it into fundamental Islam.”

O’Reilly made more, many more, observations and statements that passed as the fount of learning and wisdom about Blacks. And with each racist putdown, O’Reilly’s ratings soared to the sky, major corporations flocked to the show in droves and plopped tens of millions in advertising for the show, and policy makers of all stripes begged to be on his show. O’Reilly was Fox’s cash cow. The more O’Reilly insulted Blacks, the more he was hailed as the one guy on the airwaves who was not afraid to defy the so-called ‘race hustlers” and apologists, i.e. civil rights leaders and liberal Democrats, and tell it like it supposedly is about Blacks. As long as that was the case, O’Reilly was virtually sanctified and was TV’s equivalent of the “made man” who was untouchable.

All the while, Fox boss, Rupert Murdoch, Fox management, and legions of women in and about Fox knew that O’Reilly was a sexist scumbag and sexual predator who cost the network millions in hush money to cover for his groping, predatory lust. But, it was not just the money shelled out, corporations fleeing the scene, and the passage of time that would undue this sexual vulture. It was also the instant fury and force of women’s groups that rattled the Fox empire. This was not something that could be winked and nodded at, or laughed away. Blatant sexism and its manifestation in sexual philandering, simply will not be tolerated. It will always bring an instant white hot reaction, as it should.

But routine racist slurs before millions of viewers also should be instant cause for an O’Reilly to be jerked from the air. This wasn’t the case, and it reinforces the age-old line that a rich, White guy, can say whatever he wants about Blacks in public space and at worst will get a hand slap reprimand, make a phony apology, and then skip away to racially slur another day.

O’Reilly’s getting the boot for being a sexual reprobate isn’t likely to change that.

Earl Ofari Hutchinson is an author and political analyst. He is the author of the new ebook How the Democrats Can Win in The Trump Era (Amazon Kindle). He is an associate editor of New America Media. He is a weekly co-host of the Al Sharpton Show on Radio One. He is the host of the weekly Hutchinson Report on KPFK 90.7 FM Los Angeles and the Pacifica Network.

Bill O’Reilly out at Fox News Channel after 20 years