On Brown v. Board of Education, Trump judicial nominees won’t commit to US law and values 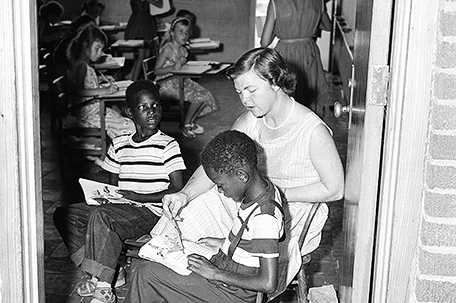 ABOVE PHOTO: White and black grade school youngsters study together in harmony at the consolidated school in Hoxie, Ark., Aug 15, 1955. The community of 1,855 de-segregated its school in July by taking in 23 Black students. (AP Photo)

Brown is more than a historic ruling. It paved the way for civil rights progress and laid the very foundation for equal protection under the law.

By Richard Blumenthal and

“Do you believe Brown v. Board of Education was correctly decided?” This might seem like a strange question to ask a judicial nominee in 2019. Sadly, it is starkly relevant, thanks to recent signals from the Supreme Court that it is open to reconsidering long-established precedents and foundational values.

No decision is more emblematic of these precedents and values than the Supreme Court’s unanimous decision in the 1954 Brown v. Board of Education. It did more than rule that segregation in schools was unconstitutional — it paved the way for the Civil Rights Act in 1964 and the Voting Rights Act in 1965. It laid the very foundation for our modern understanding of equal protection under the law.

As a member of the Senate Judiciary Committee and the leader of a civil rights organization devoted to racial justice, we believe there’s an unquestionably important reason to ask President Donald Trump’s judicial nominees whether they believe Brown v. Board of Education was correctly decided. This iconic Supreme Court ruling is a pillar of respect for our rule of law. It represents decades of hard-fought progress our society and laws have made on issues of civil rights and equal protection.

Unfortunately, many recent nominees have refused to answer it directly. Following orders from their Trump administration handlers, these nominees display brazen disrespect for our rule of law. Their obfuscation undermines the right of the Senate to carry out its duties to vet nominees. It should alarm all Americans.

The Brown question seemed particularly pertinent as we celebrated the May 17 anniversary of the landmark decision in the same week the Senate has confirmed three judicial nominees whose records mock the rights it exemplifies.

Out of touch with reality and legal ethics

One of the nominees refusing to answer was Wendy Vitter, who was confirmed Thursday as a district court judge in Louisiana. Asked whether she thought Brown v. Board of Education was correctly decided, Vitter replied, “I don’t mean to be coy, but I think I get into a difficult area when I start commenting on Supreme Court decisions which are correctly decided and which I may disagree with.”

Disturbingly, Vitter was not an outlier. In fact, the Trump administration is so adamant that all nominees refuse to answer the Brown question that even Jeffery Rosen, Trump’s nominee to be deputy attorney general, refused to affirm the Brown decision — and part of his job is to oversee the Justice Department’s Civil Rights Division.

Instead, one nominee after another has given an identical response: They can’t answer because of a potential pending matter (impossible), or Canon of Ethics (inconceivable), or some other obvious dodge. Any nominee who thinks he or she will have to consider a case that overturns Brown is out of touch with reality, and any nominee who thinks that Chief Justice John Roberts violated the Canon of Ethics when he affirmed Brown at his confirmation hearing is out of touch with the law.

Brown is about more than just its historic ruling, that separate but equal school segregation is inherently unequal and unconstitutional. It is about core values and principles deeply embedded in the constitutional consensus that binds and bonds a diverse democracy. It is about a slew of other key precedents that protect lives and law embodying our Constitution.

To dodge or refuse to answer the Brown question is to lack fidelity to the rule of law — or at least the courage to state it. It also represents infidelity to the progress we’ve made in the years since Brown was decided.

Brown was unanimous. Justices appointed by both parties joined a single opinion written by Chief Justice Earl Warren, a former Republican governor. But the principles it championed were not woven into the fabric of our nation overnight.

It took the relentless efforts of civil rights organizations like the NAACP and the blood, sweat and tears of good-willed people to change that. It is incumbent on everyone, and most especially our elected leaders and judiciary, to routinely reaffirm the decision and the hard-fought progress it embodies. Today, the only reasonable answer to a question on whether Brown was right is a resounding and forceful “yes.” Because it was right on the law and right on the values.

Sen. Richard Blumenthal(D-Conn.)is a member of the Senate Judiciary Committee. Derrick Johnson is president and CEO of the NAACP. Follow them on Twitter: @SenBlumenthal and @DerrickNAACP

More than 60 years after Brown v. Board of Education, equal education for all is still a star-spangled myth