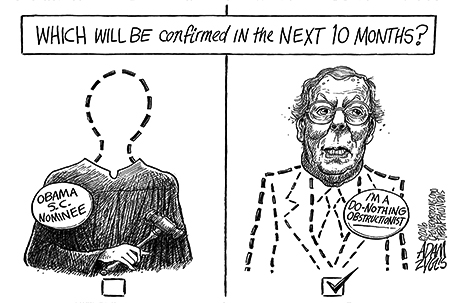 GOP leaders, led by Senate Majority Leader Mitch McConnell, predictably wasted no time in swearing that anyone who President Barack Obama named to replace the late Supreme Court justice Antonin Scalia had zero chance of being confirmed. McConnell saw no contradiction in the fact that he had no trouble voting to confirm Supreme Court Anthony Kennedy to the high court in 1988, Ronald Reagan’s final year in office.

This points up the glaring truth about a Supreme Court pick. It’s not the choice of the president that’s the issue but the president that makes the choice. Obama’s two picks, Elena Kagan and Sonia Sotomayor, have been judicial moderates that are fully protective of civil rights, civil liberties, and economic fairness. It’s a matter of politics, ideology, race and gender that have long trumped qualifications. The first two names out the box that have been near universally mentioned to replace Scalia are textbook examples of that. Sri Srinivasan, an Indian American, and Paul J. Watford, an African-American, have legal qualifications that are beyond impeccable. Both have been confirmed for federal judgeships with almost no dissent from the GOP senators. But it’s one thing confirming them for a judgeship among legions of appellate judges and quite another nominating one of them for one of only nine spots on the Supreme Court. Obama’s two prior picks caused no ideological titanic shift on the court. This one will.

It has less to do with the hard-line conservatism of Scalia than the nearly encased ideological decision making that has roiled the court the last three decades. It has gotten even worse during the Obama years.

When Roberts had the temerity to cast the swing vote to uphold the Affordable Care Act, conservatives read him the riot act. This was a stern warning that justices are expected to tow a rigid, conservative line on the court and that any deviation from that wouldn’t be tolerated.  This was just a warm-up in the court’s War on Obama. The heavy duty stuff—voting rights, affirmative action, corporate and property rights, union protections, environmental protections and abortion rights—are on the docket this term and the Roberts Court has ruled against Obama in more than 60 percent of similar cases. In more than a dozen cases in the last two years, the vote was split on a 5-4 party line.

It’s much more, though, than a case of the justices voting their party labels. In decades past, many Democratic and Republican-appointed justices have scrapped party loyalties and based their legal decisions solely on the merit of the law, constitutional principles and the public good. Thomas and the other four are judicial horses of a different color. The tip-off that they’d likely vote their ideology rather than the law came from George W. Bush. On the presidential campaign trail in 2000, Bush was asked if elected what kind of judge he’d look for and nominate. He didn’t hesitate. He pledged to appoint “strict constructionists” to the court and specifically named Thomas, Scalia and William Rehnquist as the judges that perfectly fit that description. By then, the three had already carved out a hard line niche as three of the most reflexive, knee-jerk, and reactionary jurists to grace the court in decades. Their votes to torpedo, water down, eviscerate or erode rights on all issues from abortion to civil rights were so predictable they could have been mailed in.

This go round, GOP senators could play for time and try to wait Obama out by stalling confirmation of his nominee in the year left he has in his term. The hope is that a Republican will bag the White House in 2016 and pick one of their own ideologically suited justices. Cruz was the first in the door to vow to do just that. It would be a naked hard-edged play of political football with a Supreme Court justice nominee. That’s the way it’s been for the past three decades, so it would be in keeping with what politics and ideology has turned the court into. This is all the more reason for Obama to fight harder than ever for his nominee. The two men of color that he’s tapped once for judgeships are certainly picks that are more than worth waging that battle for the biggest legal prize of all.

Earl Ofari Hutchinson is an author and political analyst. His latest book is Trump and the GOP: Race Baiting to the White House (Amazon Kindle) He is a frequent MSNBC contributor. He is an associate editor of New America Media. He is a weekly co-host of the Al Sharpton Show on Radio One. He is the host of the weekly Hutchinson Report on KPFK 90.7 FM Los Angeles and the Pacifica Network