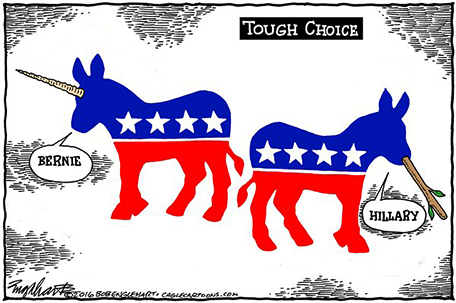 GOP presidential contender Donald Trump loudly boasts that he has turned out “millions” of new voters. He gloats that these are the people the GOP has never seen before. The millions figure is vintage Trump bunkum since there is no way to measure just how many of the big uptick in GOP primary voters stormed the polls solely because he was on the ballot. But there are three things that can be taken away from Trump’s braggadocio. The first is that there are lots more GOP voters than Democratic voters that are showing to vote up in the primaries than in elections past. How many more? The Pew Research Center put the number at 17 percent more of eligible Republican voters came out in the first 12 primaries of 2016. That’s the biggest number in more than three decades. On the other side, Democrats are getting a bump-up in turnout from past years, but their numbers are far less than the GOP’s numbers.

The second thing is that the much bigger GOP turnout has been nowhere more glaring than in the two states that have been the absolute indispensable pathway for a presidential candidate to the White House for the past two decades. The states are Ohio and Florida. The gap between GOP and Democratic voter turnout in numbers should set off loud alarm bells in Democratic strategists. GOP presidential candidates got slightly more 2.2 million votes combined in Florida. Bernie Sanders and Hillary Clinton got slightly more than 1.6 million votes combined. The gap was more than 600,000 votes.

In Ohio, the GOP candidates got slightly more than 1.9 million votes combined; while Sanders and Clinton got almost 1.2 million votes combined. The gap there was over 700,000 votes. The gap can’t be explained solely because of Trump mania, a hotly contested and competitive race between the GOP candidates, and a favored son candidate, Kasich on the ballot. The Sanders/ Clinton face-off has been just as fiercely contested, competitive, and has aroused the passions of lots of voters, plus Sanders had just come off a win in the neighboring Michigan primary which should have been enough to stir even more Democrats to turn out. But the numbers didn’t come close to the GOPs and so far few have seen fit to ask or try and figure out just why that happened.

Some are happy to shrug it off with the standard retort just wait until the general election and Democrats will flood the polls and swamp the GOP numbers as they always seem to do. But that’s tantamount to banking on a Hail Mary pass for victory and paying far less attention to the type of ground work that is absolutely essential to put a Democratic candidate over the top. With the GOP firmly in control of the legislatures and the statehouses in Florida and Ohio, not to mention the voter suppression tactics the against minorities and youth the GOP has put firmly in place in both states the lack of an intense, all out stir the passions, get out the vote drive, bolstered with lots of spending cash, is a horrendous prescription for Election Day disaster.

The third thing is that this election cycle is like none other in living memory. So far all the traditional rules of the political game, namely that both party establishments pretty much handpick who their presidential nominee will be, and that voters always play it safe and stick with the safe, established, and experienced, known quantity candidate, which means an established pol insider, are out the window. Trump and Sanders have shown that this go round it could well be different.

Trump has done one more thing for the GOP and that’s publicly anyway force it kicking and screaming to double down on mounting a near crusade to the polls by the GOP’s traditional base.d of older, white, males from the South and Midwest, suburban and rural areas, and a big chunk of the dissatisfied, alienated, hostile blue collar Democrats, young and old.

In Florida and Ohio, there is some evidence that the strategy paid off in the extra thousands of voters that the GOP padded its total with. In a general election showdown between Trump and Clinton, the very real danger to the Democrats is that the enthusiasm and the anger at the party establishments, and the thirst for change, that Trump seemingly whipped up in the Ohio and Florida primaries may not abate in November. Many of those same voters may stick around and again cast their ballot for Trump. If nothing, else, the perception that there is a real difference between Trump, the outsider, and Clinton, the established Washington insider, won’t go away. Trump will exploit that to the hilt. If it still plays well in Ohio and Florida, and worse yet in other states, the voter turn-out numbers will really tell a troubling tale for the Democrats.

Earl Ofari Hutchinson is an author and political analyst. His latest book is From Sanders to Trump: A Guide to the 2016 Presidential Primary Battles (Amazon Kindle) He is a frequent MSNBC contributor. He is an associate editor of New America Media. He is a weekly co-host of the Al Sharpton Show on Radio One. He is the host of the weekly Hutchinson Report Saturdays 9:00 AM on KPFK 90.7 FM Los Angeles and the Pacifica Network