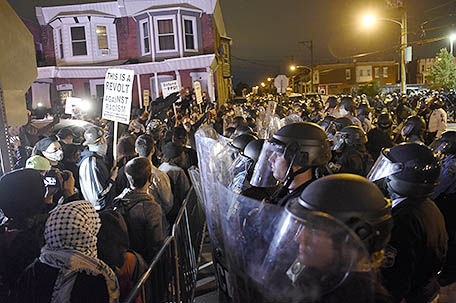 ABOVE PHOTO: Protesters face off with police during a demonstration Tuesday, Oct. 27, 2020, in Philadelphia. Hundreds of demonstrators marched in West Philadelphia over the death of Walter Wallace Jr., a Black man who was killed by police in Philadelphia on Monday.  (AP Photo/Michael Perez)

The recent police shooting and killing of Walter Wallace, Jr., the father of three has sparked outrage in the streets that has led to protests and looting across the city.

On October 26, police from the 18th District responded to a call to the home of Walter Wallace, Jr., about a domestic dispute with a mention that he was bipolar, according to reports in the Philadelphia media.

Watching the video of Walter Wallace, Jr. and seeing his mother take her last grab at her son is gut wrenching for any to watch.

Wallace’s mother, who called 911 in response to the dispute the unthinkable happened right in her presence as she pleaded with her son and the police officers not to shoot her son.

“The incident that happened the other day was uncalled for,” one of the neighbors, Wayne Morris said. “I believe with the mother out there, she had to tell the cops her son’s condition. And with that being said, the cops should have been able to handle that situation totally different than what they did.”

“That was horrible,” Morris said. “I cried and I’m a strong Black man. That’s what my dad raised me to be.”

After a brief standoff, Wallace was seen chasing the police officer around the car with a knife and in that moment, the confrontation took a deadly turn after the two officers  shouted to Wallace to put the knife down. His mother also encouraged her son to stop and put the knife down.

As the confrontation ensued, Wallace continued to move toward the officers. They then opened fire on Wallace, shooting him at least 13 times, killing him. When word spread around the city through television news outlets and via social media, residents and others began to question the incident and continued to ask themselves, “Here we go again, why does this keep happening to us?”

With visible anger and concern for the family of Walter Wallace, protesters took to the streets in West Philadelphia and began demanding for calm, an investigation and questioned whether the police officers had to use deadly force or if they had other options to subdue Wallace.

As the evening progressed late in the evening, some people involved in the protest began looting businesses throughout West Philadelphia — in particular, the 52nd Street business corridor, which was affected during the protest of the George Floyd murder on May 25 in Minneapolis..

“They’re definitely destroying the community,” Rhonda Jackson, an Enterprise Business Center employee, said “I don’t know if the store will open back up. We are the community team for the Enterprise Center, so that’s why we’re out here. We support the businesses on 52nd Street. We’re just out here giving support because when they destroy the community, we have to come out and do the clean up.”

“You have a lot of people who have put their last earned dollar into owning their own businesses and people are coming out and destroying them  and these are not the people who are causing the issue,” Area local,Rhonda McCray said. “I feel like it’s unfair for them to have their businesses destroyed. However, things that are happening, and taxpayers are paying their money for taxes that police are being trained properly, and knowing that they’re different ways to handle situations like that [which] could be de-escalated.”

“It’s not a police shooting — it’s a police murder,” another local Tamika Ball said. “That’s how I feel. That’s exactly how I feel. I think the protesting is appropriate but the looting is not. You can scream and holler all you want, but you don’t have to go into the stores that didn’t do anything to you.”

Mayor Kenney set a curfew in the city that began on October 28. Community leaders have met at the Church of Christian Compassion at 61st and Cedar Avenue in West Philadelphia with Police Commissioner Danielle Outlaw, Kenney and others to find solutions and bring the community together to heal from this tragedy.

A pattern is being established involving the destruction of neighborhood businesses   particularly when there’s a police involved shooting of an African American, man no matter what city the incident occurs in.

About 443 looting incidents were reported across the city with 58 police officers being injured during the protest and unrest.

As Philadelphia came to grips with the truth of police brutality and a community that has a broken trust with law enforcement, the city installed the National Guard twice to quell the looting and help police keep order in a city in crisis.

To the people of Philadelphia, use some restraint. Let justice take its course and judge the process of “Justice for All” and the two officers will be held accountable for their actions with the hope that the decision doesn’t lead to more unrest and protesting when that time comes for them.