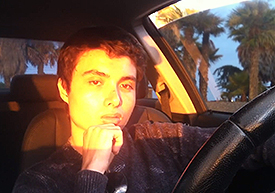 This image from video posted on YouTube shows Elliot Rodger. Sheriff’s officials say Rodger was the gunman who went on a shooting rampage near the University of California at Santa Barbara on Friday, May 23, 2014. In the video, posted on the same day as the shootings, Rodger looks at the camera and says he is going to take his revenge against humanity. He describes loneliness and frustration because “girls have never been attracted to me.” (AP Photo/YouTube)