No more thoughts and prayers… We demand action! 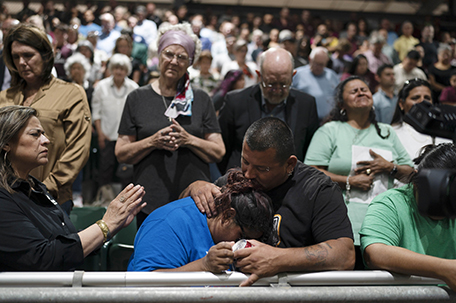 ABOVE PHOTO: Two family members of one of the victims killed in Tuesday’s shooting at Robb Elementary School comfort each other during a prayer vigil in Uvalde, Texas, Wednesday, May 25, 2022. (AP Photo/Jae C. Hong)

No more apologies, no more vigils mourning the loss of innocent lives by gunfire, no more mass shootings in our schools and neighborhoods — we demand action!

As we assess the recent gun violence in our city which occurred over the Memorial Day weekend — a time when we should respect and reflect on those who laid their lives down for our country during times of war — we are instead fighting our own war against each other with readily available weapons which cause mass casualties.

We must stop saying “we are sorry for your loss” and take action against these horrendous acts of violence that are plaguing our cities, communities, schools and families. Uvalde, Texas was the second act of mass murder of innocent people in the last few weeks, with the first being in Buffalo. As we mourn and lay to rest those lives lost in these national tragedies, we continue to do the same for those lost to gun violence in our own communities and families daily.

There have been 14 deadly school shootings since Columbine in 1999, almost all committed by a lone assailant with an assault weapon — an assault weapon made for war, capable of firing multiple rounds of gunfire at one time. I ask those who support the current gun legislation –why would anyone need an assault weapon who is not fighting in a war? They don’t …that is the answer!

We have seen over and over again the result of allowing these weapons of destruction in the hands of someone whose only intent is to kill.  We have seen the grief and devastation it has caused families and communities throughout our nation, yet we still have those politicians in Congress like  Republican Sens. Ted Cruz, Marco Rubio, Mitch McConnell and Lindsey Graham, who, along with the NRA, refuse to review, support or consider any gun reform laws.

Enough of allowing those who refuse to understand, even when the statistics are in black and white, to dictate whose rights are more important — the rights of a defenseless child or teacher, or those of a person who wants the right to own an assault weapon.  Until citizens stand up and demand change from our government, we will continue to have mass shootings and the devastation that is becoming normalized in our communities.

The United States has the highest homicide-by-firearm rate of the world’s most developed nations. Statistics from other countries that have banned assault weapons and have strict gun control laws have significantly reduced mass shootings. Among those are Canada, Australia, United Kingdom, Norway and Japan, to name a few.

Sensible gun reform can and has been implemented. I applaud Canada’s Prime Minister Justin Trudeau, who after one of the deadliest mass shootings in his country’s history, enacted new regulations to ban the use, sale and import of assault style weapons. Trudeau said, “Canadians deserve more than thoughts and prayers… These weapons were designed for one purpose and one purpose only — to kill the largest number of people in the shortest amount of time. There is no use and no place for such weapons in Canada.”

I agree and I feel the same for our country. We must protect our citizens lives by putting safety measures in place when it comes to owning or purchasing a gun. Our lives are more important than thoughts, prayers and apologies!

We must demand the ban of all military style assault weapons for purchase, bans on large-capacity magazines, implement better universal background checks, increase the age requirement to purchase arms to 21, implement a 30-day waiting period for gun purchases, create mandatory safety training courses and strict penalties on straw purchases of weapons.  If we had these gun policies in place today, we would not be mourning another mass shooting of innocent lives cut short or the lives of those in our neighborhoods and communities.  We must all come together and demand gun law changes from our Congress and legislators.

The Philadelphia Branch NAACP will continue to stand against gun violence and work with those organizations and lawmakers who want change.