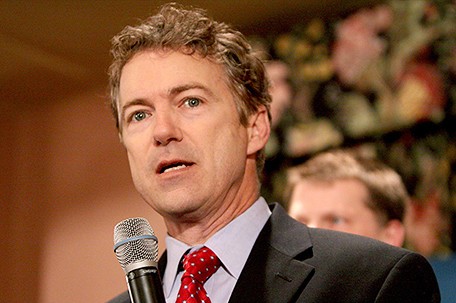 Freshly minted 2016 GOP presidential candidate Rand Paul has a few good things going for him. He has talked back to the war hawks. He wants to radically rein in out of control intelligence spying. He wants to chip away at the draconian drug laws that still incarcerate mostly minorities for long stretches for petty drug crimes. His stances have grumbly and raised eyebrows from Republican hard liners who say that he isn’t the right fit for a party trying desperately to take back the White House. But the one thing that Paul banks on to separate him from the expected large pack of senators, governors, and television personalities that will also toss their hats into the presidential rink is in the weeks ahead his big pitch to make the GOP more minority-friendly.

Before he took the stage at a downtown Louisville hotel ballroom to announce his candidacy, his opening acts were by a black minister and former Rep. Congressman J.C. Watts. The stark contrast of the minister and Watts on stage facing a mostly White crowd of supporters wasn’t lost on some observers. It’s a huge indicator of the double bind Paul is in. One the one hand, he has to sell the notion of more minorities in the GOP to the party’s traditional conservative base, while trying to sell minorities, especially blacks, that the GOP really does want and welcome them. This may be the more daunting of the two.

Paul, though, has made a few photo-op appearances before Black audiences, church groups, and academics, and at last summer’s National Urban League’s annual convention in Cincinnati. So far, it has produced meager results. He is still little more than a blip on the chart in terms of name recognition among African-Americans. There is absolutely no indication that his make-nice campaign with blacks has moved the dial up in the number of black voters that say they are willing to give the Paul presidential candidacy a real look.

Paul, however, has another problem that will be tough to shake if, and when, he trots around to black groups imploring them to give him a fair listen. The problem was on glaring display when he spoke at the Urban League convention. He spoke to a nearly empty room. This was despite the best efforts Urban League officials made to get people to show up.

There’s still the shadow of his widely quoted smoking gun interview with the Louisville Courier Journal in 2010 in which he blew off the 1964 Civil Rights Act as a slap against private businesses’ right to racially discriminate. When asked to explain, he did the obligatory disavowal of racism, but did not back away from his belief that the Civil Rights Act went way too far. Paul knows that position would render any presidential campaign Dead On Arrival. So now, whenever asked, he sounds a note of enthusiasm in claiming that he backs it without any reservations. This isn’t all. Paul was dogged for a time by revelations that a few of his key staff members had strong ties to neo-Confederate and racist fringe groups. He quickly disavowed any personal connect with these groups and their philosophies. The odor and the suspicion of the possible connections haven’t gone away. Make no mistake, as the presidential campaign gathers steam in the months to come that checkered past will be repeatedly dredged up and tossed back at Paul.

The hardest part of the sell, however, will be getting minorities to think that they can somehow share the same space in the GOP with the legions of Tea Party adherents that still pack a wallop within the GOP. Though, the wild eyed, naked race baiting, serial  President Barack Obama bashing, that was the Tea Party’s stock in trade during the first few years of the Obama presidency has at least visibly subsided, no one really thinks for a moment that the Tea Party has mended its ways and can or will morph into a Rainbow Coalition. The racial bruises and lumps that it laid out are still too raw.

During most of this time, Paul has been the one GOP notable that has been most associated with the Tea Party. His still pronounced mishmash of ultra-conservatism and libertarian pronouncements that government should have a minimal role in many areas of law and public policy concerns, including civil rights laws and enforcement is still too close for comfort to the Tea Party line. This old, worn, and thoroughly discredited view will still warm the hearts of the packs of closet bigots who pine for the old days when racial and gender discrimination was the American norm and government did little to protect Black and Gay rights.

Paul obviously believes that he can twist the hoops enough for people to see himself and his approach as the winning path to the White House. The best that can be said about this is nice try Rand, but it won’t work.

Earl Ofari Hutchinson is an author and political analyst. He is a weekly co-host of the Al Sharpton Show on American Urban Radio Network. He is the author of the forthcoming book From King to Obama: Witness to a Turbulent History (Middle Passage Press) http://www.4earlofarihutchinson.com/

He is an associate editor of New America Media. He is host of the weekly Hutchinson Report Newsmaker Hour heard weekly on the nationally network broadcast Hutchinson Newsmaker Network.

Why Carville won’t apologize to Obama for his balls crack