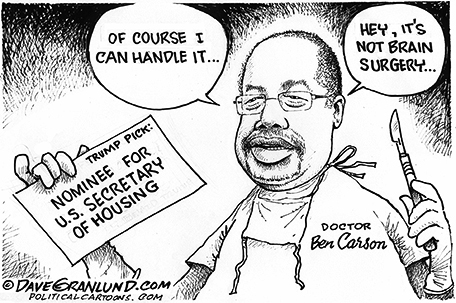 When Dr. Ben Carson emphatically declared that he has no government experience that would qualify him to run a federal agency, most took this to mean that he would quietly recede if not fade from public attention. We should have known better. President- elect Trump saw to that when he brushed aside Carson’s momentary candid admission and plopped his name down as the Secretary to be of Housing and Urban Development. This was a remarkable, but not surprising, return from the political dead for Carson.

Now we’ll have a man who self-admits he has no government experience running a crucial agency that ladles out billions annually in public housing subsidies, rental assistance, and housing finance activities, employs more than 8000 workers and administrators and operates more than 100 subsidy programs. If that’s not bad enough, Carson doesn’t even like what HUD does. He has a long and well-documented track record of lambasting housing discrimination suits, over-dependence on “social safety net” programs, getting government out of competition with private enterprise, and denouncing anything that supposedly deadens individual initiative.

This was the stuff of snickers, chuckles, and lampooning when Carson was simply private citizen Carson, or the mercifully brief failed GOP presidential candidate Carson. Few then could ever imagine that Carson would ever be in a position to actually act on any of his rabid, antique, ultra-right notions of how a government should be run. However, with the Trump HUD post offering, Carson now can give free rein to his basest impulses about government.

HUD has been a long standing favorite whipping boy of ultra-conservatives. They have repeatedly ripped HUD for its alleged corruption and cronyism, and complained long and loud about the high cost and waste of public housing projects and vouchers for low income renters. But HUD’s biggest sin to them has been that it supposedly shackles private housing developers by putting the federal government directly in the business of subsidizing home ownership. They don’t stop here. They have made the totally unsupported and outlandish claim that HUD’s butting into the housing business was one of the biggest reasons for the 2008 financial meltdown.

The only thing missing from the conservative hit plan on HUD was finding the right someone to do the dirty work to totally defrock the agency. And who better than Carson? He is Black, and he and other conservatives never tire of repeating his woeful tale of rising from the hard scrabble streets of an urban ghetto to the pinnacle of success in the medical profession. He even lightly played on it again when he said –with hopefully his tongue deep in his cheek — that he had great expertise on poor people living in public housing because he once lived in a ghetto.

It is no accident that Trump’s biggest and most visible Black cheerleader was Carson.

The trotting out of Carson to deliver the right-wing gospel from on high this time in the hacking up of HUD fits in with yet another by now familiar ploy used by ultra-conservatives during the Obama years. And that was to float Carson as a GOP presidential contender. It worked twice in 2012 and 2016. And as always, some in the media took the bait and actually treated Carson as a serious contender for the nomination. That absurdity only got too much when Carson made ever more bizarre statements about anything that came to his mind. However, it was more than political theater of the absurd. It got even more attention for the GOP. But more importantly, it touched a deep, dark, and throbbing pulse among legions of ultra-conservatives who fervently believed that Obama and many Democrats are communists, gays are immoral, and that the healthcare reform law was exactly what Carson likened it to “slavery,” meaning the tyrannical intrusion by big government into their lives.

In the past, mainstream GOP leaders couldn’t utter these inanities. They had to always give the appearance that they were above the dirt, mud, and hate-slinging fray. So, they left it to a well-paid stalking horse like Carson to do their dirty work for them. This, of course, all changed with Trump. He openly, and unabashedly, said what many conservatives thought about President Barack Obama, Muslims, immigrants, and minorities. He cynically, but masterfully, crafted this hate and bigotry into a winning campaign. It was no accident that his biggest and most visible black cheerleader was Carson. He was ever dependable to be trotted out on talk shows to defend and even praise Trump.

Carson, though, has another kind of shelf value for Trump. He gives the illusion that his administration will be race neutral and that African Americans could have access to him. Putting Carson in the top spot at HUD fits neatly into the script. He is Black, is admired for his saga in some circles, and as such he can do as much damage as conservatives want to do to HUD with maybe minimal attention to it.

That’s why Carson is around and will continue to be our never-ending nightmare.

Earl Ofari Hutchinson is an author and political analyst. He is the author of The Obama Legacy, Middle Passage Press. He is an associate editor of New America Media. He is a weekly co-host of the Al Sharpton Show on Radio One. He is the host of the weekly Hutchinson Report on KPFK 90.7 FM Los Angeles and the Pacifica Network.