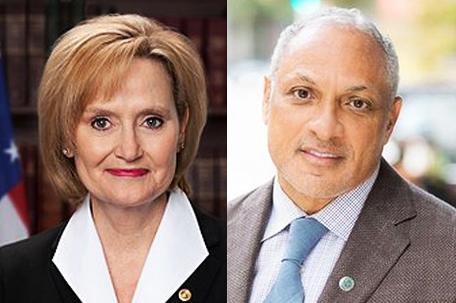 The NAACP recently issued a stinging rebuke to Republican Mississippi Sen. Cindy Hyde-Smith, who recently invoked a reference to a “public hanging” amidst her campaign against African-American Democratic candidate Mike Espy.

Associated press reported (as of Tuesday), Hyde-Smith defeated Espy by a margin of 54 percent to 46 percent — much closer than the cakewalk many predicted in a reliably red state that President Donald Trump won by 17 points in 2016. The contest was the latest reminder that race remains a potent factor in the region’s polarized partisan politics. Espy was seeking to become Mississippi’s first Black senator since Reconstruction.

Referring to a glowing endorsement from Mississippi cattle rancher Colin Hutchinson, Hyde-Smith said, “If he invited me to a public hanging, I’d be on the front row.” The remarks drew laughter and applause, but she apparently did not know the comments were being videotaped by journalist Lamar White Jr.

After public release of the video, Hyde-Smith issued a statement saying, “In a comment on Nov. 2, I referred to accepting an invitation to a speaking engagement. In referencing the one who invited me, I used an exaggerated expression of regard, and any attempt to turn this into a negative connotation is ridiculous.”

She has refused to make any further comment or apologize for the remark, which clearly invokes painful images of thousands of Black people who were lynched or killed by White supremacists in the Deep South with Mississippi being a leading offender.

The highest number of lynchings in the U. S. took place in Mississippi from 1882-1968 with 581, according to the NAACP. “Georgia was second with 531, and Texas was third with 493,” says a report by the civil rights organization, adding that 79 percent of lynching happened in the South.

Among the best-known killings of Black people by White supremacists, Emmett Till and Medgar Evers, occurred in Money and Jackson, Mississippi respectively.

Further exacerbating the impact of Hyde-Smith’s remark is the fact that she has been endorsed by President Donald Trump, who has made no public comment on the issue.

“Senator Cindy Hyde-Smith’s shameful remarks prove once again how Trump has created a social and political climate that normalizes hateful and racist rhetoric. We’ve seen this in Florida from Ron DeSantis and others during this election season and denounce it,” said NAACP President Johnson in a statement.

Ron DeSantis, Florida’s Governor-elect, also drew a fire storm of criticism when he said in a television interview that Florida voters should not “monkey this up” by electing Democrat Andrew Gillum, his opponent, who would have been the state’s first black governor.

“Hyde-Smith’s decision to joke about ‘hanging,’ in a state known for its violent and terroristic history toward African- Americans is sick. To envision this brutal and degenerate type of frame during a time when Black people, Jewish People and immigrants are still being targeted for violence by White nationalists and racists is hateful and hurtful,” Johnson said. “Any politician seeking to serve as the national voice of the people of Mississippi should know better. Her choice of words serves as an indictment of not only her lack of judgement, but her lack of empathy, and most of all lack of character.”

Espy himself has released a statement calling Hyde-Smith’s comments “reprehensible” and saying, “They have no place in our political discourse, in Mississippi, or our country. We need leaders, not dividers, and her words show that she lacks the understanding and judgment to represent the people of our state.”

Joining the rebuke of Hyde-Smith, Mississippi Rep. Bennie Thompson described her comments as “beyond disrespectful and offensive.” He pointed out that Mississippi has “one of the highest numbers of public lynching, that we know of, than any other state in this country.”

Hyde-Smith has refused to speak further on the issue, saying, “I put out a statement yesterday, and that’s all I’m going to say about it.”

From 1882-1968, 4,743 lynchings occurred in the United States.  Of these people that were lynched 3,446 were Black.  The Blacks lynched accounted for 72.7 percent of the people lynched. These numbers seem large, but it is known that not all of the lynchings were ever recorded. Out of the 4,743 people lynched only 1,297 White people were lynched. That is only 27.3 percent. Many of the Whites lynched were lynched for helping the Black or being anti-lynching and even for domestic crimes.