NAACP Chairmen: ‘Today is the First Day of our Next 100 Years’ 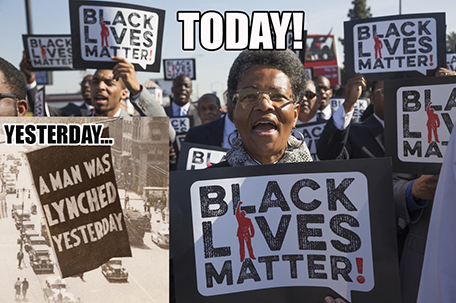 When the National Association for the Advancement of Colored People (NAACP) was founded in 1909, there were a number of undeniably stark realities facing Black Americans that the creation of the NAACP sought to overcome.

We worked to create a future in which a Black American could walk down a street without the fear of being lynched.

We wanted Black Americans to be able to exercise their right to vote efficiently and effectively, without being beaten, jailed or persecuted for doing so.

We dreamt of a world in which Black children would be able to receive the same education as their white peers, one that would permit their parents the opportunity to fulfill the great American Dream of leaving the next generation better off than they.

After more than 100 years of pushing against the same challenges, what do we do now?

In 2017, a Black American still cannot walk down a street, drive a car, play on the playground or enter their own home at night without the fear of being shot, beaten or harassed by their neighbors or their very own police – the individuals ironically pledged to protect him.

Gerrymandering and other voter suppression tactics like ID laws have made it increasingly difficult — and in some cases impossible — for Black Americans and other communities of color to participate in our nation’s democratic elections. Many are so dissuaded by the expectation that their vote may not count — or will count against them and the safety of their community — often elect not to vote at all.

Almost two decades into the turn of the century and yet millions of Black children are still taught in segregated and underserved school – and not just in the South. It is New York City that is home to the most segregated school district in the United States. And at the same time, the gap between the college graduation rates for White students and Black students is only increasing, putting that American Dream ever farther out of reach.

And though the people did choose a Black American to occupy the Oval Office, following his historic presidency, America elected a president who unapologetically sows division, appeals to right-wing extremists and threatens to fundamentally change the direction of our nation – for the worse.

For many, this moment — the realization of how little has still changed amidst such progress — is demoralizing. While our history will mark this moment as one of incredible public engagement, with individuals of all genders and ages taking to the streets and to town halls, it is also a moment of despair and fear.

When the parents of Black children like 15-year-old Jordan Edwards — who became the 105th victim of police violence this year — must kiss them goodbye in the morning with the fear that they will not come home safe that evening, what hope is there?

At the NAACP, we know that question all too well — and we have faced it all too often over our century plus. We too stand at a crossroads. After more than 100 years of pushing against the same challenges, what do we do now?

The answer is this: We’re not going to agonize — we’re going to organize.

True to our legacy, the NAACP has never shied away from change — in fact, our mission has been to embrace it. And that is exactly what we will do again now, in three main actions.

First, we will refresh our leadership and our priorities. It is clear that we must find new ways to confront head-on the many challenges presented by today’s uncertain political, media and social climate. That will require new perspectives and new voices, to both help us carve out that new path and communicate to the next generation of activists and advocates.

When you have been doing the same thing for 100 years, you cannot expect continued impact. We need to change our vision in order to be the nimble and innovative civil rights organization that our nation needs today.

Second, while we search for our organization’s next leader to take the helm, we will begin be conducting a comprehensive assessment of our infrastructure and operations, as part of a strategic re-envisioning. We want to better understand — and hear directly from our members — what we do well and what we can do better.

How are we working on the ground to address the modern-day threats to our civil rights? How can our Executive Team support those efforts? We know that our branches are what make our organization unique — they are carrying out local work with national importance — and we want to ensure that every single one of them has the platform that they need in order to keep fighting for the rights of Black Americans to live free from harm and oppression.

And third, and most importantly, we will hear from you, the American people.

In the coming months, our leadership will embark on a listening tour for the first time in our history. It is clear that Americans of all genders and ages, from all of the corners of all 50 states, have been aching to be understood, to be seen — and now, they are demanding to be heard. We want to meet those demands, and in doing so, ensure that we are harnessing the energy and voice of our grassroots membership as we pursue transformational change.

As we reimagine ourselves, we want to be formed in the likeliness of the people whom we serve. To do so, we must first see, meet and listen to them.

Amidst this transformation, one thing will never falter — our steadfast and unmovable commitment to fighting for justice and equality for our community. The times may change, but the NAACP has never been readier to face them.

We will continue to advocate for the advancement of communities of color in this country, stronger and more resilient than ever before.

Today is the first day of our next 100 years.

Leon W. Russell is the Chairman of the NAACP Board of Directors, and Derrick Johnson is the Vice-Chairman.