My boss, my brother, my friend 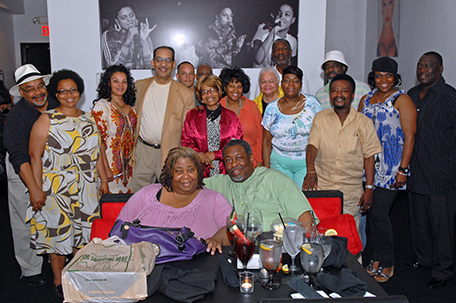 All I wanted to do after work was go home, cook, cool off and relax.

But my husband, Steve, wanted me to go with him to meet with an acquaintance at Ms. Tootsie’s restaurant to discuss some business venture.  When we got to the restaurant, he said for us to wait downstairs, that the guy hadn’t got there yet, so we waited for about 15 minutes.  Finally, Steve said, well, let’s go upstairs to wait for him.

I was mildly annoyed and skeptical, because we had been down this rabbit hole before of someone’s scheme promising to make money. But as we got to the top of the stairs and I looked around, I saw all my SUN colleagues and Jerry standing there with a big smile on his face proclaiming—’SURPRISE!  THIS IS ALL FOR YOU!’  It was a party he spearheaded, celebrating my 17 years of service with the paper.  I’m almost choking up as I’m writing this.

Jerry was my boss, writing mentor, annoying and infuriating ‘big brother,’ but most of all, my friend.  I learned a lot from him; I toughened up because of him and learned not to quit when things got difficult.  Our temperaments were like night and day; I hated confrontation – Jerry relished it, which made him such an effective civil rights leader. Facing racism and bigotry is not for the faint of heart.

But I did all I could do to support him, through running his paper and making sure that we honored his mission for the SUN – to be a trusted news voice for the African American community. He respected who I was and the way I got things done.

Jerry did things for people that were not widely known – if you were his friend, he had your back.  For this reason, loyalty was paramount to him.  We did have disagreements, and he could make me so angry, at times I was ready to quit—but I didn’t.  And while he may have yelled at me over whatever, he wouldn’t allow anyone to disrespect me or my position as managing editor of the SUN. He was the one who had the confidence that I could do the managing editor’s position — me, not so much, but I went for it and didn’t look back.

We would meet in his office every Monday to discuss the paper and what the cover would be.  But we would also chat about TV shows and what was going on on series like “Game of Thrones,” “The Sopranos,” our love of the Turner Classic Movies network and gossip.  Jerry loved good gossip. He also loved to have fun at parties, and we both shared the same favorite holiday — Christmas.

Jerry and the SUN threw me my first baby shower when I was pregnant with my youngest son Zachary, now 20-years-old a budding photographer who took photos at his street naming last Saturday.

I didn’t notice until near the end of his life that he was calling me in his office more than just on Mondays, sometimes to just chat.  I just didn’t think that he wouldn’t be here; too much was awaiting him, such as his pending marriage to Cathy and their new life together. He was still larger than life to me. He would conquer his health issues and be fine, I thought. But he didn’t make it.

Jerry Mondesire was one of the best friends I had, and I would have been at the street renaming, but for my own health mobility issues from an accident I had two years ago.  But I did watch it on Facebook and was very proud. He was a man who lived a relatively short time yet left an indelible mark in this city and helped to improve conditions for Black folks in Philadelphia.

Not a perfect man — yes, he was flawed as is the rest of us — but Jerry tried and kept fighting to make a difference, and he certainly did.