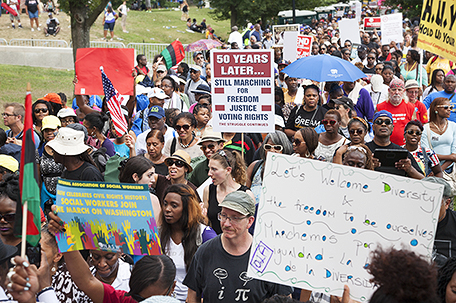 ABOVE PHOTO: Civil Rights marchers at the 50th Anniversary of the march on Washington and Martin Luther King’s I Have A Dream Speech, August 24, 2013, Lincoln Memorial, Washington, D.C.  (Photo: Joseph Sohm / Shutterstock.com)

“We must all hang together, or assuredly we shall all hang separately” said Ben Franklin when signing the Declaration of Independence.

The Black community must borrow this mandate from Franklin. Our power is in our unity and today we are extremely divided, if not in spirit, most definitely in purpose.

If any of our leaders pre-1970 [such as] Rev. Dr. Martin Luther King, Jr., Malcolm X or Elijah Muhammad, were to miraculously return today, they would not know this Black America nor recognize this Black leadership.

When did the Black community enjoy the full benefits of being American with the capacity and legal backing to compete with all other groups?  It was a mere 60 years ago with the Civil Rights Act and the Voting Right Act.  While these laws were significant, each has been thoroughly undermined and become ineffective.  Unfortunately, the Black community has fallen asleep, especially our leaders. The Black community has not had a collective win since the 1960s.

The current cohort of Black leaders (i.e. civic, religious, business, academia, intellectual, etc.) has failed the Black community overall. They have fully integrated and assimilated into white America and many have entered their positions of influence only to follow the policies and protocols of their white predecessors.  The impact of this behavior has been the dilution of the Black base, the Black movement.

Black leaders have failed the Black community mainly because they have mismanaged the limited Black power they inherited.

While Blacks have made significant progress since emancipation, we are still the most vulnerable economic group in America.  The percentage of the nation’s wealth owned by Black people is unchanged since physical emancipation in in 1863. Blacks own less than one-half of one percent (0.05 percent) of the nation’s nearly $150 trillion of wealth.  Nearly 90 percent of all of the nation’s wealth has been passed from one generation to another. This wealth is forever locked up (i.e. cash, stocks, bonds, land, business, trust accounts, endowments, foundations, etc.).  While not all white people are rich, there is a massive disparity between the net assets of the average white family versus the average Black family ($100k+ vs $6-8k).  This plays out in education opportunities, housing and neighborhood selection and capitalization of entrepreneurial aspirations.

Everyone marvels at Dr. Martin Luther King, Jr.’s “I Have a Dream Speech” but few know the real contents of this most powerful speech and some say it represented a turning point in King’s philosophy. He called the Emancipation Proclamation (the physical freedom) a “symbolic shadow.”

In a sense, we have come to our nation’s capital to cash a check. When the architects of our republic wrote the magnificent words of the Constitution and the Declaration of Independence, they were signing a promissory note to which every American was to fall heir. This note was a promise that all men, yes, Black men as well as white men, would be guaranteed the unalienable rights of life, liberty, and the pursuit of happiness.

It is obvious today that America has defaulted on this promissory note in so far as her citizens of color are concerned. Instead of honoring this sacred obligation, America has given the Negro people a bad check, a check which has come back marked “insufficient funds.” But we refuse to believe that the bank of justice is bankrupt. We refuse to believe that there are insufficient funds in the great vaults of opportunity of this nation.

Today, nearly 45 million Black people in America struggle socially and economically.  Yes, physical freedom was important but where is the economic justice?

The problems facing the Black community are massive, yet interrelated, and cannot be overcome using existing “individual” and “silo” strategies.

Although society in general is organized, it is not organized enough to address the massive disparities that continue to challenge the very existence of the Black community. Not only does the Black community need to be more organized for real reform to happen, all levels of government – philanthropic, large non-profits (i.e. health, education, and service delivery), business and corporate, civic, and political sectors – must be organized and aligned if the African American community is to implement successfully any plan of change.

The help that we need cannot come from clergy or politicians exclusively.   Black politicians are still a minority within the political circles and they have yet to build a strong Black caucus needed to advance the issues exclusively for Black people. All politicians serve at the mercy of those that help them get elected [with] money and votes).  Black clergy, while they are responsible for delivering a spiritual message, the religious community is competing against each other. This competition prevents the coming to the center (unity) that Black community needs.

In addition to unity, we must make extra efforts to organize the Black business community, which competes against each other versus against other groups.

Sure, there are many Black leaders doing amazing work, but it is just not enough. We must adopt a “race” first strategy and build an organization that can utilize all of our resources and our diversity (i.e. rich or poor, student or teacher, civic or religious, young or old, male and female, etc.) in the defense of our people who are defenseless.

At the end of the day, our issues are not about racial equality, what people think about us. What they believe about us, or how much they like us. Our struggle in America is, and always will be, about economics.  Where will the help come from to help the Black community? It will come from Black Power (Black Unity).