Message to the Black Community Universally Speaking: There are real consequences to this Presidential election – Part 1 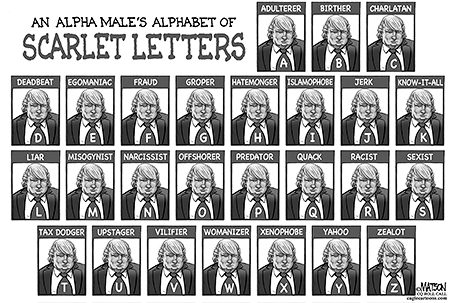 Brothers and sisters, we will never be able to hold America accountable for the unbelievable wrongs that were done to our ancestors and what the current American institutions are currently doing to Black people though an orchestrated system of policies and standards that restrict and/or inhibit our ability to fully participate in the American Dream. Without having a political solution.  While there are many fronts we must combat, none is more critical than the political front; you say the United States Supreme Court.

What separates the United States from every other nation in history is the concept of it being “a nation of laws, not a “nation of men”, which means that laws rule, not people. The goal is that laws apply to everyone, regardless of their station in society; whether it is a trash truck driver, or the President of the United States, all are to be held to the just laws of America. No one is — or can be allowed to be– above the law.  The Founders wrote restrictions into the Constitution against any law that does not apply equally to all.  Is there be a better way for a nation to deal with its citizens than treating them all equally under the law?

Unfortunately, it is men and women who must interpret and enforce the law, which is usually done in our courts. Should these issues be contested or challenged, then they would fall under the purview of the court and could possibly end up in the highest court of the land – the Supreme Court.  The Supreme Court is the final judge in all cases involving laws of Congress, and the highest law of all — the Constitution. The Supreme Court, however, is far from all-powerful. Its power is limited by the other two branches of government. The next President of the United States will possibly nominate two or three justices to the court which each will have life-term appointments.  This is an absolute game-changer, because every decision is final and would be impossible to change in the short run, and almost impossible to change in the long run.

Issues like voting rights, affirmative action, civil rights, health care, class action suits, the death penalty, mandatory sentencing, freedom of speech and freedom of religion, and so many other issues will be decided by the Supreme Court over the next three to five years and if the Black community wants to maintain existing gains or make new ones, a compassionate and liberal justice must be appointed.  If we want relief, if we want freedom, if we want justice, if we want equality; and if we want independence, we will have to earn it through a democratic system. This system is just waiting for us if we only would act with a higher degree of purpose and political understanding. There are real consequences in this presidential election.

The struggle for justice in America for the Black community is a long and onerous one, and we will need  the Supreme Court to apply the laws equally and to support solutions that will address past wrongs against us and prevent and deter racism and discrimination from happening the future.  This is not a one-time proposition, but a perpetual fight that we must wage for generations to come.  The enemy to the Black man is invisible, and it’s no longer the “in-your-face” and outright racism that existed pre-1980’s.

The good and the bad news is that Black people don’t have to deal with the gory details of the American institution of slavery; the fanatical terrorism of the KKK; the racist, unfair, and discriminating Jim Crow Laws on obvious racists in positions of power like police captains Frank Rizzo in Philadelphia, and Bull Conner in Selma, that they were confronted with on a daily basis. That’s the good news.  The bad news is that we no longer have the “acts” that can quickly unite and motivate us to defend racism (these actions will keep us on our toes). The racism that we must defend now is equally as lethal, but invisible which requires a different type of strategy because we now live in what many White people have defined as “post-racial” society. The actions we must now defend are structural and institutional and buried within all American systems.

How? Every American system favors those that have resources and can benefit from them the most. In many cases, its color blind, but therein lies part of the problem.  If you have the resources, you can succeed in America because you will have full access to some of the greatest systems in the world (i.e. education, financial, judicial, health, etc.).  However, most Black people live at or near the economic poverty level and are forced to take whatever these systems can afford to give by way of charity. This happens while those with resources are always able to get to the front of the line and optimize the resources that these systems can afford.

In this American system, poverty will handicap everyone, no matter what race or creed they are. Both Whites and Blacks are poor, and if this means that keeping some poor Whites around to show that the system is “fair” and, but for one’s own work ethic, will allow you to eclipse your status at birth to excel economically in America , this is the classic “red herring.”  This concept perfectly supports their narrative, because that it is all about “if you only pick yourself up by your bootstrap, you can succeed in America.”  America has skillfully disconnected the Black experience from its American history. This negates White America’s nearly insurmountable economic advantage that was achieved through the enslavement of Black people for more than 300 years, followed by nearly 100 years of openly racial discrimination which didn’t allow Blacks to fully compete in a resource –based capitalistic system. The playing field is absolutely skewed in favor of White people who have amassed nearly 100 percent of the nation’s resources.

The only way that Black people will have a shot at fixing these gross inequities is through our courts.  It was our laws that allowed us freedom; it was our laws that defended us against open racism; it was our laws that gave us protections against racist policies and even racist people.  Many of our fights were waged in the courts of America, and it was the Constitution that– when applied correctly at the lower courts– produced so many victories for Black people. And when those lower courts refused to do the right thing, it was the Supreme Court that would decide, and many of their decisions favored the basic premise that it must apply to all Americans and if it didn’t, it was discrimination.

Brothers and sisters, we can win today, but we must continue the struggle.  We can win today, like yesterday, because the law is on our side. However, our challenge is to ensure that the Supreme Court of United States is filled with men and women who believe in the Constitution, and its intent that all Americans have the rights, benefits, and the protections it affords to all of its citizen and when that doesn’t happen, the courts are the final reconciler. There are real consequences in this presidential election.

With the presidential election in full swing, we see America and its values on display. We see democracy playing out where the majority rules.  We have two competing parties, the Republicans and the Democrats. Both hold different views on where they think the country should be.

Republicans, generally believe that the Constitution was written not as a flexible document, but as our enduring covenant; small or limited government; strong on military defense; sovereignty of the states; economic freedom and big business; and the people, not the government, are the best stewards of our country’s God-given natural resources. This platform has a lot of code language that in effect maintains the status quo and supports the haves over the have-nots which further alienates the Black community going forward in this county.  Democrats, generally believe in bolstering the middle class, the working class; unions and the protections against big business; civil rights; public education and universal health care; and the basic rights of Americans.  While the democratic platform is more conducive and more aligned to the struggle of Black people in America, it hasn’t been able to manifest real change in nearly 60 years.

For the many who spout how great America is, I must ask for whom is it great? There are just too many Blacks suffering in this society of economic extremes and many times side-by-side (tale of two cities).  Yes, America is the greatest country on earth and yes, America has made tremendous strides. However, America has a long way to go, and it cannot get there without the inclusion of Black people. We will not make America more inclusive and more responsive to the needs of Black people but for the political process.  This is complicated by the fact that we have no centralized leadership coupled with a large Black population of people who have no idea of or need to participate in voting process. This is the result of many reasons and one I call the “Barack” effect.

The Barack effect, in essence, implies that the election of Black people into office would yield changes that the Black community has yet to see and, over time, our voting base becomes more and more alienated and disillusioned.  Not understanding that electing someone is only the first step in the political process and there must be an agenda for the politician to fulfill and a process for accountability. In addition, your politics must make it easier for you to grow your economic base while addressing your other social issues. This requires infrastructure and central leadership, which are foundational components of a movement.

Brothers and sisters, we cannot have it both ways.  In spite of our challenges, no matter how great they are, it is our responsibility to address our needs by providing the leadership needed to problem solve. It is our responsibility and ours alone.  No one is going to identify our problems and solve them as well. Are we crazy?  We must do this for ourselves because it won’t happen any other way.  We can’t complain, moan, and point fingers when the system is open for us to take advantage of.  This is what our ancestors did for us. They endured unbelievable abuse to give us the ability to dictate our own future and yet we make excuse after excuse for not living up to what they thought would happen.

There is a massive conservative, Republican right wing effort led by Donald Trump to elevate White men to a level of prominence, power and influence that can only be interpreted as reflection and restoration of the past.  White men already own and control everything but that’s not enough.  With the landmark civil rights legislation of the 1960s, outright racism has been “checked” and those that subscribe to White supremacy have been fuming because, over the past 40 years, they have had to tolerate other minority groups more than at any time in America. They are also seething over the election of a Black man as president.  THESE PEOPLE ARE NOT PLAYING. A CRUEL AND MALICIOUS RESPONSE IS IN STORE FOR THE BLACK COMMUNITY!!