Why so many still adore Trump—despite everything 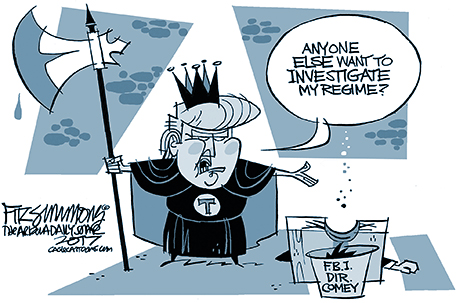 Instead of attending the pro-forma White House Correspondents’ Association dinner as every president has done in the last nearly four decades, President Donald Trump beat up on the press before a wildly enthusiastic and cheering crowd in Harrisburg, Pennsylvania. The crowd predictably takes the cue and jeers at reporters busily hammering away on their laptops at the rally. This is more than a case of Trump playing to an emotional moment to a few thousand of his true believers at a rally.

There are millions more like them. Every poll taken in the first 100 days of his presidency should the same thing. He’s the least popular of any president almost ever in a president’s first 100 days. Yet, buried deep in his bottom wallowing popularity numbers is the only number that counts for him. That number shows that there’s no buyer remorse among the millions who voted for him, and they’d do it again. The Trump adulation in Pennsylvania was no different than what he got during the campaign whenever he showed up in Trump friendly parts of the state. He almost matched Democrat Hillary Clinton’s primary vote total in the state.

Pennsylvania was no aberration. In 10 other primary states, more Republicans than Democrats trooped to the polls. They came mostly because of Trump. Much was made then that all he’d get were votes from less educated, blue collar White men in the electorate. And that there just weren’t enough of them to push him over the top. This was badly misleading. Trump got a lot of votes from middle-class Whites, both male and female, and many of them were college educated, business and professionals.

This only told part of the story of why they backed Trump then, and for the most part still do. Elections are almost always won by candidates with a solid and impassioned core of bloc voters. In Trump’s case, White males, older voters, middle-income, college educated voters vote consistently and faithfully. And they vote in a far greater percentage than Hispanics and Blacks, and especially young voters. The big exception was 2008. President Barack Obama’s run turned the campaign into a crusade to make racial history. That powered the massive sea change in traditional voting patterns. In 2012, it didn’t hold up. President Obama won the popular vote by just slightly more than 5 million votes over Romney. In 2014, it totally fell apart with the GOP’s steady voting base again back at the polls, and the party used it to seize the Senate. Trump flipped the enthusiasm, passion and energy script that Obama wrote in 2008. He did it not simply because you had a lot of old racist guys who so hated Obama that they’d vote for the devil if he was on the ballot. Nor was it merely a case of millions being so fed up with the deal making, corporate shilling, perennial special interest pandering, Beltway Democrats and Republicans who repeatedly snub their noses at blue collar and middle class Whites, and will vote for anyone who claims he’d change that. The brutal reality is that Trump was, and is, simply different. He’s not a politician. He never held an elected office. He’s a wealthy guy who says whatever he thinks no matter who it offends. He’s a walking, living, breathing anti-symbol of everything that legions detest about government and those who run it. This makes him their rebel with a cause. So, it matters little to them how many lies he tells, how many campaign promises he breaks about kicking out the corporate bosses and party bureaucrats, or how many vacations he takes on the tax payer’s dime, or how often he embarrasses himself in dealings with foreign leaders. This is almost expected, and for his rock solid backers a source of endless perverse delight.

The more the New York Times, Washington Post, and Washington pundits hammer him is proof to them that Trump is striking the right chord in rankling the always loathed mainstream media. This insures that the base for him remains big, wildly adoring, and even more ready to dig their heels in and rally around their guy.

The comforting notion was that Trump was so repugnant and repulsive, and that since so many routinely mock and ridicule him as an ego maniacal babbling idiot, that it was only a matter of time, a very short time at that, that he’d fall flat on his face. This was always dangerous to assume. The proof of that was from the moment that he declared his candidacy, pundits, much of the media, and the GOP and Democrats laughed him off as cheap, sideshow entertainment who would wilt in the GOP debates, collapse under intense media scrutiny, and fade away after the drumbeat attacks on him from the top tier GOP candidates. Not only was Trump still standing when the dust cleared, but he got even more wildly popular in countless voting circles.

More than 100 days into his presidency that hasn’t changed. And given who Trump is and why millions adored him enough to put him in there, their adoration for him is not likely to change anytime soon, if ever.

Earl Ofari Hutchinson is an author and political analyst. He is the author of the new ebook “How the Democrats Can Win in The Trump Era” (Amazon Kindle). He is an associate editor of New America Media. He is a weekly co-host of the Al Sharpton Show on Radio One. He is the host of the weekly Hutchinson Report on KPFK 90.7 FM Los Angeles and the Pacifica Network.