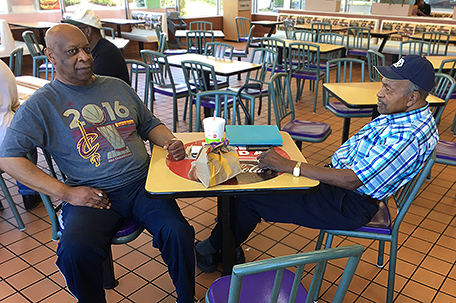 ABOVE PHOTO:  Ike Jenkins, right, and James Smith chat in East Cleveland, Ohio. Black Republicans cheer Donald Trump for a newfound rhetorical outreach to African-Americans, but say the GOP presidential nominee must take the message beyond arenas filled with white supporters and venture instead to the inner cities he has started talking about at rallies.  (AP Photo/Bill Barrow)

Back in July, there was great laughter and knowing nods when some polls showed that then-GOP presidential contender Donald Trump would get 0 percent of the Black vote. This seemed about right. Trump seemingly earned and deserved the goose egg with his horrendous record of slamming the door on Blacks in his apartment rentals, his relentless birther savaging of President Obama, his non-stop trash of the Central Park Five, wild enthusiasm for stop and frisk, and his thinly disguised race-tinged cracks and digs at his rallies. But a funny thing happened between the near gag line 0 percent Trump supposedly would get if the election were held in July, and the actual election. That 0 percent of the Black vote, magically transformed into some real numbers that actually had some significance for the election, and maybe beyond. The 8 percent of the Black vote he got, which numbers wise factors out to roughly a half million votes topped the total that GOP presidential contenders Mitt Romney in 2012 and Sen. John McCain in 2008 got. Another 4 percent of Black voters did not support Democratic rival Hillary Clinton. This factors out together to over 1 million Black votes lost to Clinton. This does and should raise eyebrows.

The drop off in the Black vote for Clinton from what Obama got is easy to explain. One, she’s not Obama. He’s Black and his campaign became a virtual holy crusade by Blacks to make history and put one of their own in the White House. No White Democrat could hope to match that spine-tingling exuberance. A lot more Blacks repeatedly ripped and nagged at Clinton for hubby Bill’s alleged racial sins as president, those being his shove through of the draconian omnibus crime bill that soared the numbers of Blacks in federal and by extension state pens, and a welfare reform bill that seemed more punitive than helpful, and Hillary’s own one-time offensive branding of Black lawbreakers as “super predators.” This also hurt.

However, the brutal reality is that thousands of Blacks did vote for Trump. Their reasons are just as easy to explain. Trump touched a tiny nerve with his shout that poor, underserved Black neighborhoods are supposedly a mess with lousy public schools, high crime and violence, and chronic joblessness and poverty. And he dumped the blame for that squarely on the Democrats who run and have run most of these cities for decades. Trump doubled down on that slam with a handful of carefully choreographed appearances with high-profile Black preachers, at name Black churches. This was just enough to take the hard and sharp edge for some Blacks off the almost-set-in-stone image of Trump as a guy with a white sheet under his suit.

There was more. As far back as the 2004 presidential election, there was a sign that more than a few Blacks, most notably Black conservative evangelicals, were deeply susceptible to GOP conservative pitches on some issues. A considerable number of them voted for Bush that year and that was enough to give him the cushion he needed to bag Ohio and win the White House. The same polls that election that showed Black’s prime concern was with bread and butter issues—and that Bush’s rival Democrat rival John Kerry was viewed as the candidate who could deliver on those issues—also revealed that a sizable number of Blacks ranked abortion, gay marriage and school prayer as priority issues. Their concern for these issues didn’t come anywhere close to that of white evangelicals, but it was still higher than that of the general voting public.

In 2008 and 2012, Black GOP advocacy groups ran ads hammering the Democrats again for their alleged indifference to and outright aid and abet of Black suffering in the inner cities, and touting the GOP’s emphasis on small business, school choice, and family values as the best path to Black advancement. This pitch has always had some appeal to many Blacks. And though it would never trigger any kind of stampede to the GOP by even most of these conservative-leaning Blacks, it was enough to take some of the sting out of the GOP’s naked history of racial abuse.

Trump understood enough of that history. He tailored the few pitches he did make to Blacks for their votes to reflect the stock GOP pro-business, free enterprise, and the healthy economy line as something that Blacks also could and should embrace.

The 8 percent of Blacks who voted for Trump, combined with the numbers who didn’t vote at all, or didn’t vote for Clinton, did not help elect Trump. He won with an Obama like crusade among less educated white male and female, blue collar and rural voters. However, enough Blacks did buy his pitch that a conservative, Republican businessman, with a horrific tainted racial history, was a better bet in the Oval Office than a Democrat. This makes Trump’s victory even more of a troubling political oddity.

Earl Ofari Hutchinson is an author and political analyst. He is the author of How President Trump will Govern (Amazon Kindle) He is an associate editor of New America Media. He is a weekly co-host of the Al Sharpton Show on Radio One. He is the host of the weekly Hutchinson Report on KPFK 90.7 FM Los Angeles and the Pacifica Network.