Mahopac’s racist tweets are much of America’s tweets 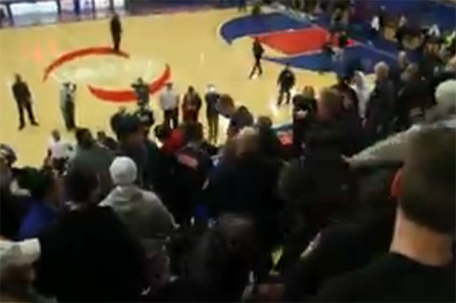 Here is an extensive sampling of the racist tweets that got the mostly white Mahopac High School in Westchester County, New York in hot water and drew recent national attention.

“That’s why you shouldn’t let monkeys out of their cages #MtVernonZoo,” @ryansarf.

@max_Senger1. posted the extremely racist picture of a Confederate flag with the simple word: “Hello.”

“tough loss boys, but at least we can talk to our dads about it.”

“Guess Dad’s not buying me that Ferarri now.”

“We still have fewer illegitimate children than those guys.”

“Good thing I’m not counting on a basketball scholarship. Good luck Knights on getting into Mount Vernon Community College.”

“Can’t wait to read about the future success of the MV Knights in the state championship. One day, they might be able to read too.”

“Will being a Varsity Basketball State Champ impress your future cellmates?”

“It’s nice to see the success of the SNAP program in Mount Vernon. Your ‘head start’ has really paid off.”

“Hard loss. Going to have to blow off steam tomorrow at the Mahopec Country Club Golf Course. #whitesonly”

The tweets were posted and sent following the nearly all White Mahopac basketball team’s narrow loss to the predominantly black Mount Vernon High School on February 27. Now it’s true that eight Mahopac students were suspended, and the coach Kevin Downes, who is African-American, resigned. The Mt Vernon district superintendent demanded that the basketball team be placed on a one year suspension.(It didn’t happen). And that school officials warned the student body to be on good behavior.

But that’s the start not the end of the sorry saga. It’s also true that there was just as much outrage from fans at the rash of bad publicity the school got.  The coach strongly hinted that his resignation in part was triggered by the rally round the team and school from legions of its fans. The Mahopac school district superintendent was in enough befuddled denial to claim he saw “no pattern of behavior” to the racist acts, and declared there was no reason to take any further action beyond the mild hand slap suspensions. Even this was too much for Republican State Sen. Greg Ball. He lambasted Mt. Vernon High for allegedly creating “the toxic environment” that led to the racial ugliness. More than a few outraged letter writers took the cue and turned the tables and finger pointed the Black players and their fans for starting the trouble and for being just as racist.

This didn’t end it. Countless letters to the editors in the area newspaper, the Examiner, and thousands of tweets on https://twitter.com/YesYoureRacist site added an avalanche of even more vile racist slurs and backed the suspended students. However, the most intriguing thing about the Mahopac tweets was that with an exception of a couple of them, they are hardly the stock crude, shrill, and profane tweets, digs, and slurs commonly found on racist blogs and websites. They calmly repeated the standard litany of racial stereotypes about Blacks; namely derelict absentee fathers, violent prone, gang affiliated, drug dealing, dumb downed morons, and of course criminals.

This is no aberration. Barely a week later racial slurs and taunts were shouted by the crowd during a girl’s semi-state game Saturday in Bedford, Indiana at players on a predominantly Black high school team.   A few days after the Mahopac blow up GOP congressman and House Budget Committee chair Paul Ryan echoed the same sentiment as some of the Mahopac tweeters  when he blamed the high incidence of unemployment in the “inner city” on men as he put it that haven’t learned “the value and the culture of work.” Ryan slightly walked back his choice of words but he didn’t walk back the sentiment behind them.

Ryan and the Mahopac racist tweeters and their defenders are in good company. An AP survey on racial attitudes toward minorities in October, 2012 found that in the four year period from a prior AP survey on racial attitudes in 2008 a clear majority of Whites (56 percent) expressed animus toward Blacks. The jump in anti-black racial sentiment came despite nearly four years in office of an African-American president. The reasons given for the climb ranged from voter polarization to racial denial by policymakers.

President Barack Obama’s victory was more a personal triumph for him than a strong signal that stereotypes are a thing of the past. His win not only did not radically remap racial perceptions, or put an end to racial stereotyping but gave it a launch pad to explode even more virulently as seen in the casual and lax racial caricatures, depiction, ridicule, and typecasting of Obama and Michelle Obama on blogs, websites, and at tea party rallies, often with the most lurid and grotesque race-baiting signs and thinly veiled racial code words.

The Mahopac High student’s racist tweets were hardly as the school’s principal shrugged off the handiwork of a few unreconstructed malcontents and bigots. They have become standard fare for much of America.

Blowing off tea baggers as racist misses the point