Limitation is an Imitation 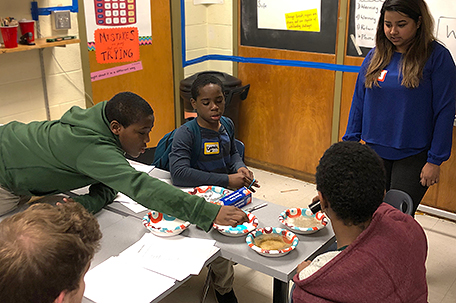 ABOVE PHOTO: Ana Bhowmik, a lead mentor for iPraxis, teaches middle school students at Dr. Tanner G. Duckrey Public School how the density of an object can be determined through water volume displacement and surface tension. (iPraxis photos courtesy of Leland Laury)

The number of Black and Hispanic people entering the STEM (Science, Technology, Engineering, and Math) field has grown, but these two groups especially, continue to be underrepresented in those spaces. Aside from the lack of diversity in that realm, there also seems to be a shortage of interest in general. Last week, I had the opportunity to speak with the folks from iPraxis and Steppingstone Scholars to figure out why that is, and was intrigued by what they had to say.

STEM — initially called SMET, and now also referred to as STEAM — is no spring chicken, but it has gained in popularity over the past 10 years. I assume that the increased interest is due in part to President Barack Obama’s 2011 State of the Union address which urged Congress and the country to pursue more careers in technical fields. Since then, we’ve seen STEM expertly woven throughout some of our favorite movies, TV shows, and in the media as well.

Admittedly, math and science were not my strong suit while in school, so prior to my conversation with iPraxis and Steppingstone Scholars, I never understood how numbers were so enticing to some. iPraxis founder Jeremiah White helped me make the connection. He explained that whether a person is interested in STEM — or as in my case, prefers journalism — the main objective is to find the query and to do the best you can to answer the “why.” In actuality, it is the same goal that I have when conducting an interview.

There seems to be a need for programs like iPraxis and Steppingstone Scholars because according to White, many schools no longer place much emphasis on critical thinking.

“One of the things that our school systems have gotten away from is teaching young people how to explore, how to answer questions, how to seek knowledge…. I have not found, in any of the schools we’ve been to, [a lot] of students who didn’t want to figure things out,” he said. Melanie Snier, a teacher at Steppingstone Scholars, agreed with White’s assessment.

As a young student, I found the bulk of my math and science courses to be especially difficult and relatively irrelevant to my desired career path. The idea of STEM provoked feelings of stress and anxiety, so I avoided it all together whenever possible.

According to the Pew Research Center, I am not alone in this; Approximately 52% of young adults don’t pursue STEM degrees because they find that the work is too hard. Other cited issues include time commitment, cost of education, and lack of resources.

There’s a common saying that goes as follows — “you can’t be what you can’t see” —  and regardless of whether or not you agree with that statement, I surmise that maybe a contributing factor to the dearth of Black and Brown bodies in the STEM arena. In fact, according to the Pew Research Center, Black people only occupy about 7% of STEM positions, while Hispanic workers occupy 6% of those positions. In these communities, it’s not uncommon for students to get bullied for being “nerdy” and can be coined as not being authentic members of their communities due to their interests being considered foreign.

In our groups, these sorts of careers are often seen as careers for White people, thus limiting ourselves out of fear and ignorance.

Programs like iPraxis and Steppingstone Scholars have a mission to change our current trajectory by providing opportunities to underserved students.

iPraxis works with approximately 800 unduplicated students from sixth through eighth grade in seven charter and public schools in the Philadelphia area on an annual basis. Their goal is to provide students with various opportunities to bring real world science, engineering, and technology to the students that they serve. They do this through mentoring programs, field trips, science fairs, and a host of other interactive activities. For more information about iPraxis, visit: http://www.ipraxis.org .

In addition to providing in-school, afterschool, and summer enrichment programs, they also coordinate partnerships between nonprofits/institutions and schools who have a desire to increase their STEM focus. The focus continues through high school. At the present time, Steppingstone offers comprehensive programming through its own programs as well as Upward Bound.

Both iPraxis and Steppingstone Scholars work tirelessly to provide support, inspiration, opportunities, and resources to underserved students in the Philadelphia region in order to dispel the myths that I’ve listed above. They have taken on the challenge of exposing the minority population to fields that have seemingly been out of reach for us. The invaluable lessons taught through STEM programs offer opportunities for all students to view things differently.

It boosts self-esteem and creates excellence. In the coming years, undoubtedly due to the exposure that the students they work with are receiving, not only will STEM begin to see more Black and Brown faces in its field, but students who choose other careers will have an improved skill set as well. So watch out world, iPraxis and Steppingstone Scholars are equipping our future generation with life changing tools that are sure to give them a seat at the table.