Letter from a Birmingham Hotel 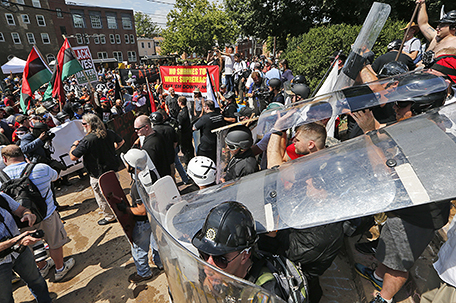 ABOVE PHOTO:  White nationalist demonstrators use shields as they clash with counter demonstrators at the entrance to Lee Park in Charlottesville, Va., Saturday, Aug. 12, 2017. (AP Photo/Steve Helber) 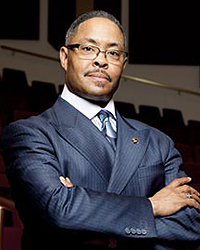 Over 54 years ago, the Reverend Dr. Martin Luther King, Jr. penned a letter from a Birmingham jail, which eloquently outlined his sentiments of the state of inequality in America. For the past week, each night I have sat in a Birmingham hotel and watched the public discourse of events in Charlottesville that mirror in so many ways the America Dr. King experienced in 1963. While I have the luxury of observation within the amenities of a 5-star hotel room, I do not have the luxury to turn off the television and do nothing. As he sat in that jail cell, Reverend Dr. King famously wrote: “Injustice anywhere is a threat to justice everywhere.” As I sit here in Birmingham, I am compelled to reflect on those words. Privilege and complacency coupled with despair and apathy have infected the psyche of America far too long.

While I am heartened that there has been a quick response by some to denounce the intimidating, violent behavior of White supremacists and Neo-Nazis, I am challenged that many of my fellow Americans are surprised by the actions of this country’s leadership and the throngs of racist, anti-Semitic marchers. Under the guise of preserving “White culture” and supporting Confederate monuments — most of which were erected in the Jim Crow era — and in an attempt to symbolize White supremacy, Charlottesville, 2017 shone no different light than Birmingham, 1963. Some mistakenly believed that all the necessary work on race was accomplished by Abraham Lincoln and the Civil War, which aided to end slavery. While others suggested that our labor in this area concluded with Reverend Dr. King, the Civil Rights Movement, and the Civil Rights Act of 1964. Such dismissive viewpoints on race relations in America are inconsistent with the evidenced growing backlash against diversity and a sense of “White victimhood.”

I understand the apologetic sentiment that has been echoed by many: the actions in Charlottesville “is not who we are” as a nation. However, African-Americans and other victims of the various hideous forms of hate in America beg to differ.  We live in a country which provides tacit approval of bigotry because it has failed to come to terms with its original sin.  A country that was built on free Black labor for over 200 years from slavery to sharecropping has yet to reckon with what made America “great.” Rather than an America that prides itself on a system where justice is blind, we have lived, instead, in an America that has turned a blind eye on justice. Overt racism has not died with past generations. Young, White supremacists walk our streets and hallways casually and comfortably. It is no wonder that the intricacies of systemic racism and unconscious biases that infect and affect our institutions and everyday lives go unnoticed, unacknowledged, and unchecked.

Although we sense that racism, anti-Semitism, misogyny, homophobia, and ethnic and religious hatred may be hiding within a political philosophy, we ignore its massive detrimental effects. Such ideologies kill bodies, kill the spirit of communities, and kill the vision of a nation.  We cannot allow these ideologies to control the conversation, because these conversations spread the lie that the oppressed are at fault. They misidentify and disparage the purpose of Black Lives Matter, a group organized to address illegal police brutality on Black people. These tactics are not new. Similar disparaging propaganda was lodged against the NAACP during the 1960s.  They compare White Nationalist marchers to those who oppose them. Not new. They made the same comparison between the KKK and the Freedom Riders. Let us not be distracted.

What is clear is that the current President’s rhetoric and policies have exposed the realities of our country. The backlash from an election of a Black president and the hate that has bubbled under the surface is apparent for even those who have tried to close their eyes. So, we just cannot tell the racists who converged on Charlottesville to return to where they came. Those same people are people we encounter every day – judges, police officers, loan officers, landlords, cashiers, managers, bosses, CEOs. We must recognize the populism of racism and racist systems.

Nonetheless, we know that this world’s political solutions do not change the hearts of mankind. Only God can change what He has created, and Satan has distorted. Simply, the Gospel is required. The process, however, is complicated and extensive. To continue this march toward justice, we must imagine the Gospel outside of the confines of the four walls of the church house and the “pie in the sky” half-truths of a watered-down Sunday School lesson. We must exercise the muscle of the teachings of Jesus, who changed the world as a political, social, and economic revolutionary.

The Gospel of Jesus requires us to be informed. We must become fluent in the language of all industries and appreciate the contours of political, economic, social, and technological structures.  Read books, go to school, attend meetings, ask questions, listen to contrary viewpoints, and, by all means, study and measure your learning by the Word of God. Our worship and service must be done “in spirit and in truth.” (John 4:24). This will enable us to demand more from leadership, understand the power and limits of our vote, and elevate people to positions of political, economic, and educational influence that can effectuate change for us.

The Gospel of Jesus requires us to be strategic. Courageous Charlottesville civil activist Heather Heyer’s last Facebook post read: “If you’re not outraged, you’re not paying attention.” Heather was right. We should express moral outrage for the day-to-day atrocities that grip the powerless.  But, this passion must be expressed in thoughtful, organized action. Our moral stance must be supported by a sound strategy. To effectuate real and meaningful change, we must think strategically, create plans of action, marshal people and resources, and execute that plan. Indeed, that’s exactly what Jesus did in executing his plan for the Great Commission. His strategy of public teaching and miracle working drew believers to hear His Gospel message. Also, He recruited and developed leadership to tell people about His message to “all parts of the world.” (Acts 1:8). Likewise, we must receive Godly direction, and then play an active and integral role in developing leaders and soldiers for the new yet familiar fight. This requires us to move outside the safety of church walls and come together on point and on message.

Most importantly, the Gospel of Jesus requires us to act in love. “So now I am giving you a new commandment: Love each other. Just as I have loved you, you should love each other.” (John 13:34-NLT).  Christians are bound by a moral and spiritual imperative to display outward expressions of love to even the least deserving. God’s presence and power can be known to mankind only where love abides. Make no mistake. Love does not tolerate evil. Love does not cower to the symbols and expressions of hate. Love does not permit the perpetuation of racist ideology. Just the opposite is true. Love drives out evil. Love stands and sacrifices for justice. Love speaks truth to power.

Sitting in this hotel, I am reminded that the Birmingham campaign for civil rights was a coordinated effort for equality. I encourage everyone to reflect on the work we need to accomplish. Let’s not grow complacent and relegate our political, social, and economic action to an expression of our feelings on a Facebook post or tweet to our friends. To “stay woke” is an exercise far beyond expressing our thoughts on social media, at the dinner table, or at the church meeting. It takes much more work than reading a few tweets and a brief news article to form learned thoughts and creative solutions.

And, there is no time left to sit still and muse about the inequities that we face as if we have no hope. Far too often over the past five decades, we have started our efforts with a march and halted our efforts prematurely with a vigil. A call to action requires sustained efforts by all with common goals, regardless of whether we agree with every detail. Be informed, be strategic, be the love of God.

Once dying, Birmingham is suddenly hot

My Soul Looks Back in Wonder: Birmingham, Alabama