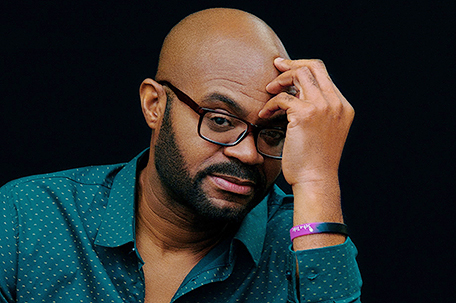 ABOVE PHOTO: Cinematographer Nigel Thompson recalls how his father’s lessons — and example — guided him after his father, John Thompson, died when he was only 13.

Although many fathers grouse about the short shrift they get on Father’s Day, the power and importance of fathers in shaping the lives of their children and grandchildren cannot be understated or ignored.

With Sunday, June 16 set aside to honor fathers, we asked some men to reflect on the most important lesson they learned from a father, father figure, mentor, teacher or other male with influence in their lives. The following are parts of their stories.

“My father was absent and the most important thing I learned from that was to be present and be a father. I was raised with my grandparents. My grandfather was a model for me. The main lesson I learned was to be committed and handle it.”

Dennard, who grew up in St. Petersburg, Florida during the Jim Crow era, said Papa Joe wasn’t his biological grandfather.

“He married my grandmother and raised her seven children,” Dennard recalled. “He was the male figure in my life and continues to be the model. He was very soft-spoken and tinkered with things. He was a marksman in the military and took me out at age 8 to shoot a gun. He never laid a hand on any of us, but I never wanted to disappoint him.”

Dennard, who’s been married for more than 30 years to Dr. Sharon Dennard and is the father of three grown children, said Sgt. Joe Johnson’s impact has lasted his whole life and he recently wrote a dedication to his grandfather in a book.

“My mom had me in college and I didn’t move out of my grandparent’s house until I was eight,” he said. “The first Christmas without them tore me up. Sgt. Joe Johnson was the entire man. I never saw a flaw in my entire life – that’s who I came from.”

“I would say that the lessons I learned didn’t happen at one time,” said Thompson, a noted cinematographer in demand around the world. “I had him for 10 short years. He was the calmest person I’ve ever met in my entire life. Mom would shout and carry on and he’d be perfectly calm. He was the one who got me into the arts when I was a child.”

Thompson said his father, John Thompson, was a police officer and in his off time, he’d read poetry and was part of a theatre group.

“He was grooming me for a life in the arts and he didn’t even know it,” he said. “He taught me patience and how to solve things. I am that way, particularly with work. The main question I have is ‘how can I fix it?”

Thompson said his father’s death when he was 13, threw him into a tailspin but forced him to grow up quickly.

“When he died, as often happens, you’re not sure what to do or what to think,” Thompson said softly. “For a year after he died, I was in a haze. Mother forced me into doing adult things like ironing my clothes to go to school and ironing my siblings’ clothes too. I was responsible for everything after that. I had to get up at three in the morning to arrange transportation to school and take care of my siblings. I didn’t think about how tough it was. I really didn’t realize it until I was in my 20s.”

His father’s example of thinking through and solving problems had become a part of him.

“I was thrown into the position of being responsible for everyone under me and to tell the truth, I handled it pretty well,” he said. “I saw my mother get up and get things done and my father used to get up and get it done as well.”

Willie Hines, 56, sector head for Amphibious Integration in the Amphibious Warfare Branch, for the Chief of Naval Operations

“The other day, I cried from Benning Road to Eastern Market thinking about my father,” said Hines, a resident of Prince George’s County, Maryland. “It’s because Father’s Day is coming.”

Hines said he grew up in rural southern Louisiana in a town which had 8,000 people. He grew up in a shotgun house that had no running water or indoor plumbing.

“We didn’t have running water until I was 10 years old. It was definitely a motivator for me.” Hines said. “The first important lesson happened when I was 8 years old. I went with my father to the store. My father was 37, but he addressed a 26-year-old White boy in the store as sir and the White boy called my father by his first name. That took me immediately to a dark place.”

Hines said the young man tried to engage him in conversation and reached out to shake his hand, but he refused to respond or reciprocate.

“When we left, my father was angry. When we pulled off, he said, ‘I say ‘yes sir’ so that your ass can eat, so that your brothers and sisters can eat and so your mother can eat,” he said. “He was upset with me. But when we got home, he explained to me what it was like for him living in southern Louisiana, overcoming challenges, fighting with White boys, being let go from jobs. He told me he wasn’t less than a man. He said he hoped I would understand. I took away from him what my journey would be like as a Black man, a father, someone’s husband and that I would have dignity in whatever I did.”

Another lesson learned over the entirety of his namesake’s life was his work ethic. And it’s clear that he’s not made of the stock his father was, Hines said.

Hines said he remembers his father coming home from one job for 15 mins, eating then laying on the floor before going off to another job.

“Man, he had so many jobs…He worked at Empire and would go for a week at a time in Plaquemine. He caught fish and cleaned fish and fileted them. He was a gas station attendant. Worked for city government in the Water and Gas department and worked for Dow Chemical as a contractor supporter. I remember I went to work with him when I was 15 to make some money and I fell out in that hot sun. We were out in the sun shoveling s–t. I fell the hell out in that sun, he put me in the shade and went back and continued working.”

Hines said his late father only had a fifth grade education, but raised four boys in a tough, arbitrary world rife with racism, White privilege and entitlement.

“I grew up most of my life hating White people, but he taught me to be like water, to become fluid and taking the shape of whatever space/form that you’re put it in,” Hines said. “When you’re young you don’t know what’s on the other side of the mountain…I’m glad I had the chance to talk to Dad, share, and thank him for the things he did and taught me.”

“Man, there are just so many lessons. It may take a minute or two,” Warren Shadd mused. He said his father, James M. Shadd, used to tell him, ‘While you’re out here bullsh—ing, certain little boys are studying day and night to be your boss.’ He was such an aggressive businessman.”

The elder Shadd was the exclusive piano tuner to the historic Howard Theater – the first African-American allowed to join the union – and as a child, Warren Shadd said he’d tag along.

“I saw Sarah Vaughan, Duke Ellington, Nancy Wilson, Jimmy Smith, Joe Williams, Pearl Bailey, Count Basie, James Brown and other legendary performers,” Shadd recalled. “I was enamored with the pointed toe shoes and slick hair joints, the pageantry, strobe lights. There were great lessons I learned from my father from ages 4 through 11 such as understanding how to do stage performances, choreography. He also had me do things on piano, fix things such as changing bridal straps and changing hammers on piano actions, especially on old uprights. Those things subsequently are how I know how to build and rebuild pianos.”

Shadd comes from a family of musicians. His father was a pianist and drummer and had a big band; his aunt was acclaimed Jazz songstress Shirley Horne; his grandmother Marie was a pianist in a ragtime band, and his grandfather Gilbert designed and built a collapsible drum set. He is the first African-American piano manufacturer, the only Black person to build pianos in the world. He followed his father’s footsteps to become a second-generation piano tuner and technician, and is a child prodigy and a third-generation musician.

His musical career was deeply influenced by his father who was a jazz pianist and drummer in the Drum and Bugle Corps. Growing up, he said his aunt, Shirley Horne, and a gaggle of other musicians were always at the house.

Shadd said he is still in awe of his father’s prodigious work ethic.

“There were lots of lessons learned, such as seeing the discipline of my father,” he said. “He would go to his government work ‘til 5, come home, shower and shave and then he would go play with his band. He did this for 33 years. He would get only one or two hours sleep and then he’d be at it again. Given this, I couldn’t be a slacker.”

“My father, Samuel Johnson, was the best man at my wedding,” Johnson said. He told me so many things. But the thing that stood out was that all you really need in life is one good friend, and to be careful of all the others around you.”

Johnson’s dad, a high school dropout, held several jobs, including working as a maintenance engineer at Metropolitan Police Department headquarters. The family car was a taxicab, he said.

“Another piece of advice he told me is that you do what you have to do in life and don’t cut corners. I have two boys and I quit my job to be a stay-at-home dad when they were 4 and 7 years old. I also started my own business, “Black Men in America.” I’m always trying to model appropriate behavior and teach young people.”

“I created “Daddy Academy” because I had to teach these guys how to be men.”

As for family, his father taught him another crucial lesson.

“The other thing was to not listen to your friends when you’re married and never embarrass your wife in public…Let me put it to you this way: In July I will have been married for 34 years — so I listened.”

The Faith of Our Fathers: Reflections on the Black Church