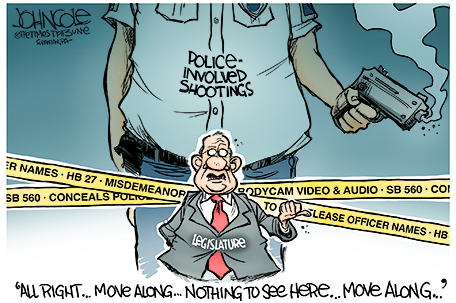 The judge who acquitted Jason Stockley gave a revealing glimpse into the “Mt. Everest-high” bar in trying to get a cop conviction in deadly force cases.

Former St. Louis police officer Jason Stockley is the latest in the never-ending revolving door of cops charged with murder, manslaughter, reckless endangerment or any other of the array of charges brought against cops who wantonly kill and walk free. The victims in a disproportionate number of cases are mostly young unarmed African-American or Hispanic males. The names of the most recent victims are familiar; Samuel DuBose, Sylville Smith, Philando Castile, and Terence Crutcher. Four Black men slain by police in three cities at four different times. Now with Stockley’s acquittal by a judge we can add the name of Anthony Lamar Smith to the grim list.

The circumstances in the five cases have much in common. The killings came after stops by the officers. The men apparently posed no physical threat to the officers. Two were shot while running away. Three were shot in their cars. Smith was one of them. The other thing they have in common, and the reason why the state even goes through the motions of filing charges, is that the killings are caught on video. There was one slight departure from the script in the Smith killing. Stockley was acquitted by a judge, not a jury. More on that in a minute.

The universal shout is that the killings and the acquittals of the police who overuse deadly force are simply more proof that the system is violent, racist, and hateful of Black men whose lives have no value. There’s also some evidence that some police officers have ties with, or are deeply influenced by extreme right-wing, race baiting para-military groups. That may be. But it doesn’t tell why cops have a virtually guaranteed walk- free pass from judges, juries, and prosecutors the rare times that they do wind up in a court docket in the killing of a young Black person.

Let’s go back to the Smith case. The judge who acquitted Stockley gave a revealing glimpse into the Mt. Everest high bar in trying to get a cop conviction in deadly force cases. He noted that Smith was a drug dealer, and that a bag of heroin was found in his car. He then leaped from that to make the startling claim that it’s not entirely unlikely that a drug dealer would be armed. From that startling claim, the implication hung heavily that if he had a gun, he was likely to use it. Therefore, this supposedly supported Stockley’s claim that he feared for his life and shot in self-defense. It made no difference that there was not a trace of Smith’s DNA on the gun he was alleged to have. The judge quickly waved away the charge that Stockley planted a gun and the videotape that showed suspicious behavior by Stockley as “inconclusive.”

How will Trump’s administration impact you?

The major elements that set the near impossible high bar for cop convictions were on glaring display in the Stockley trial, a poor Black male, a criminal history, a video that can be skewed any number of ways, and a gun. That’s just the starting point. Anthony Lamar Smith was killed in 2011. That’s a six-year lag. During that period memories fade, public outrage and protests are long over, and the accused officers have sufficient time to tailor and perfect their versions of why they resorted to deadly force. They also are represented by attorney’s courtesy of — and paid for by — police unions who are among the best in the defense trial business with lots of experience defending police officers accused of misconduct. The officers are immediately bailed out, and they will serve no actual pre-trial jail time. They make motions for a change of venue or ask for a bench trial. The legal ploy worked with Stockley. He got a judge and an acquittal. The presumption is that a judge is much more likely to believe the testimony of police and police defense witnesses than Black witnesses, defendants, or even the victims.

The ultimate ace card for police officers that use dubious deadly force is the 1985 Supreme Court decision that police departments can make their own rules about when a suspect poses a threat to an officer. It comes down to a judgment call by the officer. The time-tested standard that is virtually encoded in law is that “I feared for my life.” This will be stated, massaged, and repeated in every conceivable way by defense attorneys during their presentation. They’ll bolster that by painting a vivid and fearful picture of the defendant as violent and aggressive. The message is that the use of deadly force was both necessary and justified.

There’s another major impediment to getting convictions. That’s the prosecutors themselves. The rare times they prosecute officers in deadly fore cases, they often overcharge, present far less than a vigorous prosecution, and allow the time clock to run off on when officers are brought to trial. This all works to the officer’s advantage. The judge rejected the murder charge and sloughed off the prosecution’s plea for at least a conviction on lesser charges.

The daunting barriers that prosecutors face in trying to convict cops who kill will remain rigidly in place. This assures that America’s cop trials will continue to be America’s big charades.