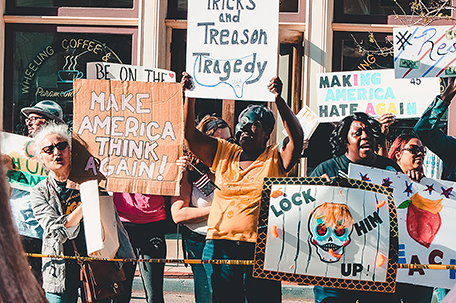 As the Democratic presidential primaries move onto Nevada, South Carolina and the many Super Tuesday states, candidates turn their attention to people of color, and particularly African Americans.

Many candidates find their rhetoric contradicted by their record; their promises conflicting with their performances.

Donald Trump now seeks to woo Black voters by taking credit for the economy, by touting the first steps in reducing mass incarceration, and by hyping so-called “opportunity zones.”

His history — rising to prominence with the vile racist campaign about whether Barack Obama is American, embracing the Nazis at Charlottesville, dedicating his administration to erasing all things Obama, framing his political appeal on race bait politics — gives lie to his histrionics.

The same occurs on the Democratic side.

Pete Buttigieg always sounds good, but African American leaders in his town excoriate his record as mayor on race and policing. Amy Klobuchar runs as a moderate, but her brutal record as a prosecutor limits her appeal. Mike Bloomberg has the resources to flood the zone, but he too struggles to explain his harsh, racially biased stop-and-frisk policies as mayor of New York or his laughable embrace of right-wing nutcase theories that somehow anti-redlining policies triggered the financial crisis.

Bloomberg is joined by Joe Biden on what seems like an endless apology tour.

African American voters are not easily fooled. They have a clear agenda. They suffer structural inequality — more unemployment than whites, lower wages, worse jobs, worse schools, inadequate health care, unaffordable housing, unsafe neighborhoods befouled by pollution and poisons, inadequate childcare, lack of recreational facilities, and the outrages of a criminal justice system that is structurally biased against them. They want what most Americans want, and they have a trained eye about politicians.

Notably absent from the debate is a leader prepared to be as bold and as serious about the challenges facing African Americans as the Kerner Commission was 22 years ago. The commission, chaired by Illinois Gov. Otto Kerner, was created by President Lyndon Johnson in the wake of the devastating urban riots of the late ‘60s. It included leaders from both major parties, as well as representatives of labor, the police, business and civil rights groups.

It became famous for its stark warning: “Our nation is moving toward two societies, one black, one white — separate and unequal.”

Dr. Martin Luther King pronounced the report a “physician’s warning of approaching death, with a prescription for life.” In many ways, it was the last attempt to address honestly and seriously the structural inequalities that plague African Americans.

It told harsh truths: “What white Americans have never fully understood but what the Negro can never forget — is that white society is deeply implicated in the ghetto. White institutions created it, white institutions maintain it, and white society condones it.” It concluded that one main cause of the urban violence was white racism that left too many young African Americans without hope.

It offered not nostrums and pablum but a serious agenda to redress the maladies: new jobs, new housing, an end to de facto segregation, integration of schools, day care for children, higher wages or income supplementation, greater services, and more diverse and sensitive police forces. It did not blink at the billions that this would cost, suggesting that the cost of not acting would be far greater. The Kerner Report — and Johnson’s War on Poverty — was lost in the jungles of Vietnam. The costs of that misbegotten war — in money, in lives and agony, and in political upheaval — torpedoed any serious effort to address our problems at home.

What the Kerner Report did leave was a marker: a measure of what it means to be serious in addressing the problems of our society.

Much has changed over the last half century, yet too much is the same. Affirmative action has opened closed doors for some people of color. America is more diverse, yet still deeply divided. De facto residential segregation has been largely sustained. Inequality has grown more extreme. Schools are even more divided by class and race. Affordable housing is even less available.

Structural racism still stains our criminal justice system. So, as the politicians come campaigning for African American votes, they will get a hearing.

We appreciate the attention and the gestures. But the Kerner Report set the standard for what a serious leader would champion.

We’ll see who comes close — if anyone does — to accepting that challenge.