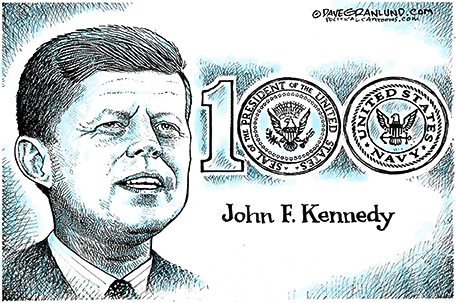 “But I tell you the New Frontier is here, whether we seek it or not. Beyond that frontier are the uncharted areas of science and space, unsolved problems of peace and war, unconquered pockets of ignorance and prejudice, unanswered questions of poverty and surplus…But I believe the times demand new invention, innovation, imagination, decision.” –Senator John F. Kennedy July 15, 1960

On May 29th, we commemorated the 100th birthday of one of the most popular presidents ever, the late President John F. Kennedy. As America romanticizes Kennedy’s “Camelot,” accurate historical context requires that we also assess Kennedy’s understanding of realpolitik. He was a shrewd and practical politician.

Before he delivered his definitive statement on civil rights in 1963, Senator Kennedy voted against the 1957 Civil Rights Bill in order not to alienate the Southern Democrats whose votes he would need for a successful run for the White House. He reluctantly added the words “at home” to his 1960 inaugural address in reference to the struggle for human rights. To Kennedy, the omission would keep the human rights struggle in the domestically accepted anti-communism context. To include them would refer to the politically volatile Civil Rights Movement. Then there was Vietnam.  Kennedy was a proponent of the “Domino Theory.”   If South Vietnam fell into Communist control, the rest of the region would befall the same fate.

Kennedy was also a true visionary whose clear and lofty rhetoric motivated Americans to view both domestic and foreign policy issues as challenges to overcome instead of insurmountable obstacles.   “We choose to go to the moon. We choose to go to the moon in this decade and do the other things not because they are easy, but because they are hard; because that goal will serve to organize and measure the best of our energies and skills…”

The celebration of his 100th birthday and the short-lived Kennedy administration (1037 days) provides us with a lens through which to view our current circumstance and president.  Instead of America embracing the ideals of Kennedy’s New Frontier, “new invention, innovation, imagination, decision”; America has retreated to the safety of the familiar, America the usual.

In his 1960 Valley Forge speech, Senator Kennedy articulated the challenges of the New Frontier and was quite prophetic regarding the issues he highlighted. On the geopolitical landscape, he foresaw “…earth-shaking revolutions abroad – new nations, new weapons, new shifts in the balance of power and new members of the nuclear club.”  Domestically he also foresaw “new frontiers” being faced at home.  Fifty-seven years after Senator delivered this speech, Americans are faced with exactly the same problems and instead of vision and optimism Trump offers lies, retrenchment and hopelessness. 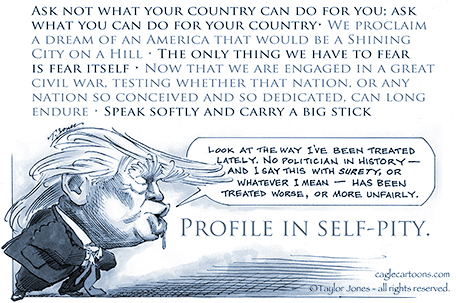 Kennedy foresaw medical scientific breakthroughs enabling an aging population to live longer.  He asked, “But will these extra years be a blessing or a curse? Will they be years of loneliness, poverty, high doctor bills, and low income? Or will they be years of dignity and security and recognition?”

In the area of education, Kennedy highlighted problems with a looming public-school classroom and teacher shortage that would spread to Americas colleges and universities. He called for more money to be invested into teachers’ salaries and classroom construction. Kenney said, “There is an old saying that civilization is a constant race between education and catastrophe. In a democracy such as ours, in an age such as this, we must make sure that education wins that race.”

One of the other areas that Kennedy highlighted was automation, “…machines are replacing men, and men are looking for work.” He went on to say, “We cannot reverse the tide of technology, but lest we become its slave, let us make certain it serves the people.”

Finally, Kennedy spoke to the growing problem of pollution and the ecology, “If we continue to ignore the polluting of our streams, the littering of our national parks, and the waste of our national forests, we will be denying to ourselves and our children a part of their rightful heritage.”

On the international front, one program initiated by President Kennedy to combat the international threats facing the country was the Peace Corps. The Peace Corps was a new “army” designed to assist people of developing nations make “economic and social progress”.  The Kennedy administration encouraged Congress to appropriate millions of dollars to the new and fledgling agency NASA, to make America first in its quest to win the space race.

Domestically, President Kennedy signed legislation raising the minimum wage, increasing Social Security benefits and federal aid was provided to cities to improve housing and transportation.  In terms of civil rights Kennedy used the power of the presidency to support James Meredith’s attempt to integrate the University of Mississippi and ordered his brother, Attorney General Robert Kennedy, to protect the Freedom Riders in the South.

President Lyndon Johnson was able to carry forward other Kennedy initiatives such as Medicare, federal support for education, and wilderness protection as part of his Great Society Program. Since the end of the Johnson administration, there has been a dramatic shift in the focus of the American government.  Subsequent presidents (Republican and Democrat) have worked to undo many of these social programs. As Dr. King stated, “there was a real promise of hope for the poor — both Black and White — through the poverty program… Then came the buildup in Vietnam, and I watched this program broken and eviscerated, as if it were some idle political plaything of a society gone mad on war…”

Americans have been convinced to shift away from the idea that government should work in the best interest of the collective, “We the People…”. We are now focused on and supporting the machinations of what Sen. Lindsey Graham (R- S.C.) called a “…race-baiting, xenophobic, religious bigot.”

Budgets are numeric representations of priorities. Trump’s budget slashes assistance to the urban poor and a proposed $6.2 billion cut from HUD’s budget. He proposed cutting the overall HHS budget by 17.9 percent, and the EPA would lose $2.6 billion out of its current $8.1 billion in funding.  His proposed budget will impact programs such as Meals on Wheels. It also targets the Department of Health and Human Services with a nearly 18% cut next year, and the National Institutes of Health, which would see their budgets cut by $5.8 billion.  All of these cuts to important domestic programs that support the poor, public health and the environment, while increasing military spending in the coming fiscal year by 10 percent, or $54 billion. He’s erroring on the wrong side of the macroeconomic model of “guns or butter.”