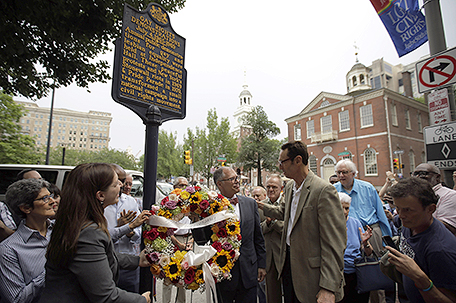 ABOVE PHOTO: Jim Obergefell, center, the man behind the landmark Supreme Court gay marriage ruling, looks to Malcolm Lazin, right, with the Equality Forum, after they laid down a wreath at the Gay Pioneers historical marker across from Independence Hall and the Liberty Bell Center, Thursday, July 2, 2015, in Philadelphia. Some 40 activists picketed for gay rights on July Fourth in 1965 at the site. (AP Photo/Matt Slocum)

I recently had lunch with one of the prospective Philadelphia candidates for Mayor in next year’s election. At this point, you’re probably saying wait, there is still an election this November, an important election at that. So to my Pennsylvania readers, let me say this. If you’re LGBT and are not already planning to vote for Democrats John Fetterman for Senate and Josh Shapiro for governor, there is nothing else I can say, since both their opponents will outlaw you and your marriage.

And in my estimation, you really must hate yourself pretty bad if you’re voting for any of those Republicans. It’s also the same case in Texas and Florida.

So let’s go back to my first point. Next spring we in Philadelphia will have an election for Mayor and City Council. Behind the scenes, those races have already begun.

So while those mayoral candidates are seeking my support, I’m telling them it will be based on their support of our candidate for City Council. As to our candidate — if you didn’t decide you were a candidate at this point, it’s already too late, since a winning campaign takes planning and is not done at the last minute.

What else? You must be a known commodity among those already in the political system and elected officials, not just in your community, but across the city. You also must already be known by the LGBT community, have a major grasp of how the Democratic Party operates, and have many connections to all its factions.

Then there’s what all campaigns need: money. You need those funds to afford a professional and tried and tested campaign team, mailers, and to be able to take time away from work for six months. And that’s the short list.

There are very few candidates that can fill that list, but I expect one of them to do so. Any others, without those qualifications, is what is known as a spoiler. We’ve had that in the past, and we came in 6th place, which means a loss for Council At-Large.

That should not happen again, and those politically astute know that. Once a candidate with all the qualifications steps forward, we should be able to unite and win.

Over the years, those of us in the LGBT community have made many friends in the government, politics, labor and civic organizations. We have helped all of those achieve representation for their communities. Hope the support we showed then will be returned now. It is our time!

Mark Segal is an American journalist. He is the founder and publisher of Philadelphia Gay News and has won numerous journalism awards for his column “Mark My Words,” including best column by the National Newspaper Association, Suburban Newspaper Association and the Society of Professional Journalists.

Republicans with blood on their hands

Mark Segal reflects on the 50th anniversary of the Stonewall Riots

When political connections allow discrimination, we fight back