It’s official — the Tea Party is now the Republican Party 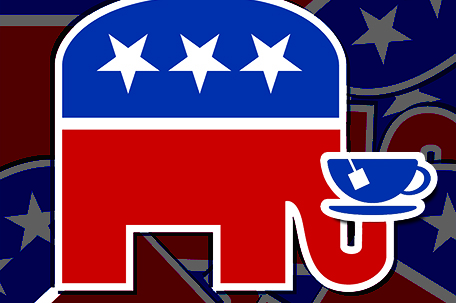 Georgia House Representative Jack Kingston went through a hoop that virtually defies belief. He voted against a bill that he spent months on helping to write.

The bill was a spending bill and the type o bill that the tea party has relentlessly opposed. Despite his hard work to get the bill approved, Kingston, when it came time to vote, got the message; don’t even think about voting for it or else.

The “or else”  loomed big for Kingston since he’s a GOP Senate candidate and he looks nervously over his shoulder to make sure that he doesn’t get on the Tea Party’s wrong side.

Kingston is no anomaly. Nearly every other GOP candidate for any national office in the November mid-term elections is tipping gingerly on the same eggshells as Kingston when it comes to the tea party. Much has been made that public opinion on the tea party has soured since its heyday in 2009, and the likelihood is good that most if not all of its quasi officially backed candidates will go down to crashing defeat in head to head match ups with so-called GOP establishment incumbents or establishment backed candidates in the GOP primaries. That means nothing since GOP candidates such as Kingston feel obliged to kiss the party’s ring to win.

The first big warning sign that the lines were fast becoming blurred between the tea party and the GOP establishment was last year’s partial government shutdown and the GOP saber rattle over the debt ceiling raise. Then an estimated forty House Republicans that were solidly tea party aligned led the shutdown charge over the supposed runaway debt ceiling and government spending. But even before that in the relative short period of time that they had been in Congress they managed to force dozens of votes to defund or repeal the Affordable Care Act, torpedoed any talk of tougher gun control provisions, and immigration reform. At the same time, they repeatedly deluged Congress with a flood of demands for spending cuts on everything from Head Start to food nutrition programs.

The tea party casts a huge shadow cast over the GOP for a simple political Their fervent backers touch a deep, dark, and throbbing pulse among legions of ultra-conservatives who think that President Obama and many Democrats are communists, gays are immoral, and that the health care reform law is a massive government intrusion into their personal affairs. At first, mainstream GOP leaders publicly refrained from spewing this type of fringe sounding rhetoric. They had to always give the appearance that they were above the verbal mugging of Obama, Democrats, and minorities. This was and is a main reason that the Republican National Committee came out with media and public massage blue print in 2013 for winning more women, minority and gay votes in the 2014 mid-term elections. GOP leaders doubled down on this by taking a few jabs at the more strident unreconstructed bigots such as nutty rocker Ted Nugent when they pop off with a racial inanity. But that didn’t mean they could not expropriate tea party positions on the issues.

That’s only part of the story for the tea party’s near total morph into the GOP.

GOP presidential contender Mitt Romney and dozens of GOP candidates that sought to oust perceived vulnerable Democrats from House and Senate seats in 2012 knew they had to fire up ultra-conservatives and conservative Christian evangelicals and get them to mass march to the polls to have any chance at the White House and maintain control of the House. It was not enough to simply pound Obama and the Democrats on health care reform, immigration, alleged big government intrusion, and tax and spend profligacy. There had to be a hyper-charged emotional edge to rally the big numbers the GOP needed and still needs to win.

The tea party supplied that mostly because it directly conforms to the unchanged political reality of the GOP. It is an insular party of Deep South and narrow Heartland, rural and, non-college educated blue-collar whites. While those numbers are shrinking, they are still huge, and more importantly, in mid-term elections they traditionally have voted in far greater numbers than blacks, Latinos and youth voters.

The GOP and its tea party shock troops in the House and Senate have fully read the political tea leafs and they know that the 2014 midterm elections shape up to be a colossal battle for the GOP to hold onto the House and to snatch the three seats needed to take control of the Senate. The tea party can make enough noise and generate enough votes where the GOP has pulled out all the stops to oust Democratic incumbents by insuring that they field credible candidates.

This has not been lost on the Democratic Senate incumbents who are in the tough fights to hold onto their seats. They have made no bones about distancing themselves from Obama on issues such as the Affordable Care Act, and even publicly telling him to stay away from their states during the campaign. This is the ultimate testament to the tea party’s official morph into the GOP.

Writing the Tea Party epitaph is not just premature but absurd