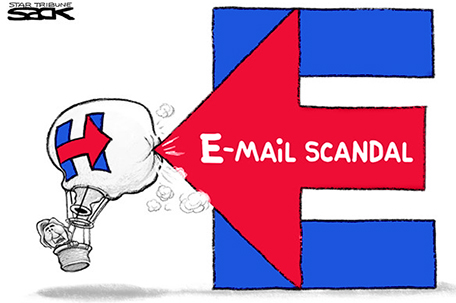 That’s the number of times Democratic presidential candidate Hillary Clinton will have been dragged before the Republican controlled House Select Committee to testify about Benghazi if she testifies as reports say she will this October. The date hasn’t as yet been officially confirmed. This time, the panel will zero in on Clinton’s private emails to make the case that as then Secretary of State she either badly bungled the U.S. response to the Benghazi attack or deliberately lied about what she did or didn’t do to prevent the attack.

That didn’t really matter. The relentless GOP narrative has been that Clinton illegally used her private email account to conduct State Department business and that those emails will show a pattern of neglect, incompetence and cover-up. The story got even bigger when a tantalizing hint was dropped that there could even be a criminal probe into Clinton’s supposed misuse of her emails.

None of this is new stuff. It’s been hashed and rehashed over so much that if anything the raw facts about the emails have been blurred or distorted. The facts, though, are clear. There is absolutely no proof that Clinton did anything wrong in using her private server to conduct some State Department business. There was no legal prohibition on any government employee using their personal email account to conduct government business at the time she did. The GOP has tried hard to poison the public well with the suggestion that Clinton may have destroyed or mishandled, either deliberately or accidentally, government documents tied back into Benghazi.

But there is no proof of that either. Though it’s true that a National Archives and Records Administration rule does mandate that emails be “preserved in the appropriate record keeping system,” during Clinton’s tenure at the State Department there was no regulation in place that set a deadline for Clinton to turn those emails over to the Administration. The rules prohibiting government officials from using their private email accounts to conduct government business officials was changed nearly two years after Clinton left the State Department.

Yet, even this is a moot point since Clinton turned over 55,000 pages of her emails to the State Department that were related to her work at the department. This, and the fact that the there was no law on the books then that barred Clinton from using her private emails to conduct business, makes the notion of criminal conduct on her part crass and silly.

However, the point of the GOP’s Hillary email obsession is the same as its pounders of her for her alleged missteps and conniving on Benghazi, embarrass and discredit her as a 2016 presidential candidate. The contrived email and Benghazi flap fit neatly into the GOP’s now chosen point of attack on her, what is to tar her as someone who is totally untrustworthy, even a congenital liar. The Republican National Committee wasted no time in issuing a statement following the inspector general’s report on the handful of supposedly sensitive emails. It lambasted her for “jeopardizing” the nation’s national security.

If Clinton eventually testifies before the House panel on Benghazi, the emails almost certainly will be its exhibit number one to make a circumstantial case that there’s both a trust issue with Clinton and she is a menace to the nation’s security. The GOP, as in the past, will have absolutely not a shred of hard evidence to base this smear on. This is less important than Republicans will again get what they want. That is lots of media talk and the hope that this will plant even deeper the seed of doubt in the general public about Clinton’s fitness to be the nation’s next commander-in-chief.

Clinton made an effort to parry the GOP’s planned ambush by laying down ground rules for her testimony. The main one being that the questions be confined to the Benghazi attack, and not her emails. It’s on this very point that predictably things have hit a snag. The panel from its public statements has no intention of agreeing to that. This would defeat its purpose which is to slur her integrity. The repeated playing up Clinton’s emails as some sort of dark, sinister plot by her to cover-up and whitewash her actions on Benghazi and at the State Department won’t end with the House committee’s hearing. That’s because it’s not about Hillary’s emails, but Hillary.

The GOP hit on Rice is a hit on President Obama