Is there no decency? 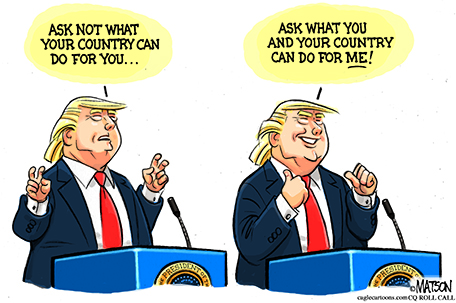 During the 2016 campaign, our 45th President [Donald Trump] once promised that he would be “so Presidential that it will be boring.”

Instead, he has managed to irk even his Republican allies by wallowing in the muck of name-calling, yet again, belittling a woman for her looks.  “Morning Joe” host Mika Brzezinski, 45 tweeted, was still “bleeding from her facelift” when he saw her during the New Year’s holiday.  He also disparaged Brzezinski’s intelligence and poked fun at her co-host Joe Scarborough.  Dozens of Republicans, including leaders like House Speaker Paul Ryan (R-WI), have scolded the President on his language in the June 29 tweets.  Some have used terms like “civility” and “decency” to distance themselves from his comments.

It is easy to scold this president on the indecent ways he speaks to, and of, women.  It is easy to shake one’s head at his juvenile tweets.  Certainly, our President has the temperament of an unruly 8- year- old (and that is unkind to 8 year olds).  But we can spend so much time wondering about this President’s temperament that we can forget about his abhorrent policy initiatives that are far more dangerous than his mindless tweets.

At the same time that 45 is attacking cable news hosts, the Senate is supposed to be considering a health care plan that “repeals” the Affordable Care Act.  There is no civility or decency in advocating for a health care plan that would leave more than 22 million people uninsured.  There is nothing civil or decent in the President suggesting that Obamacare be repealed, even if there is no replacement for it.  So while many hours of television time will be spent excoriating 45 for his silly tweets about the “Morning Joe” team, far more should be spent dealing with health care, with employment creation, and prison reform.

All eyes are on the president and his poison pen.  I’m not so sure that’s a good thing.  We should be equally concerned about other policy actions that are happening, even as 45 is clowning on the public stage.   He wakes up in the morning to send out mindless tweets, but his minions, who are neither tweeting nor clowning, are working to roll back our civil and voting rights. 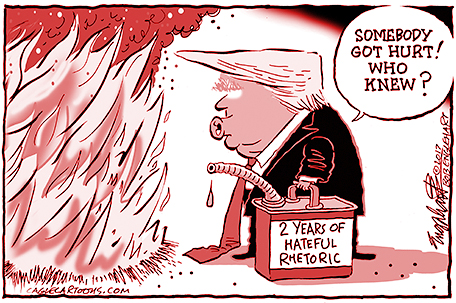 Are decent Republicans an endangered species?  Certainly, some Republicans will step up when 45 crosses the line on civility with his unhinged tweets.  Too many others, though, are silent, not only in the face of misogynistic tweets, but also in the face of inhumane public policy.  Because they have placed partisanship over common humanity, they have been silent in the face of draconian public policy, especially around health care.  Those who have stood up, such as Nevada Senator Dean Heller, have attracted the ire of the big-money alt-Trump regime, those deep-pocketed PAC funders who have attempted to bully Heller into supporting Trumpcare.  Indeed, those Republicans who have bucked the 45 machine have found themselves unfairly attacked.  Attacks on Republicans like Heller and Collins are ways to intimidate others into silence.

While 45 is tweeting insanity, immigrants who are honorably discharged veterans are being deported.  They joined the Armed Services, and served our country, both because they are patriots, but also because they were promised citizenship in return for their service.  Is there no decency?  While 45 is doing his best imitation of a schoolyard bully, school administrators from both red and blue states are looking at the ways Trumpcare would affect poor children and pushing back on the horrible legislation.  Both Democratic and Republican governors are appalled at the ways Medicaid cuts will hurt their constituents, but 45 is too busy tweeting on posturing to deal with his natural allies in the states.

Trump’s tweets are simply the tip of the iceberg.  They illustrate a lack of decency that is worse that the incivility of name-calling.  The indecency and incivility in this administration is as much about flawed and inhumane public policy as juvenile name-calling.  In criticizing 45’s decency, let’s keep our eyes on the prize.  Our President is not just a clueless buffoon; he is a dangerous and clueless buffoon.  We should focus on the danger more than the cluelessness.

Julianne Malveaux is an economist, author, and Founder of Economic Education. Her podcast, “It’s Personal with Dr. J” is available on iTunes. Her latest book “Are We Better Off: Race, Obama and public policy is available via amazon.com

Foolish words in the wake of tragedy

Obama lines up a meeting with lawmakers, a speech in Chicago