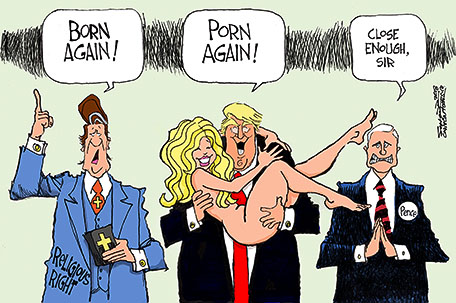 Not surprisingly, one of the latest revelations about #45 is the report that, in 2016, his lawyer, Michael Cohen, paid adult film star, Stephanie Clifford (AKA “Stormy Daniels”) $130,000 to secure an agreement preventing her from disclosing the details of a 2006 sexual liaison with Trump.  Unfortunately for #45, Clifford had already memorialized the details in a 2011 magazine interview.

She disclosed that a year-long affair began four months after Trump’s wife Melania delivered Barron, #45’s youngest son.  The most ardent Trump supporter must admit that these circumstances fall well within the definition of “infidelity.”

That this $130,000 payoff has caused so little public concern is also not surprising.  After all, Trump offered that he could shoot someone in Times Square and lose no support.  Maybe I have become inured to his bad acts, but I find that any discussion of his behavior only informs or reinforces my evaluation of the nature of his character.  Or should I say lack of character!

The definition of infidelity is: a breach of trust or disloyal act. Using that, infidelity is not uncommon to the personal life of Donald Trump.  Trump’s affair with Marla Maples while still married to his first wife, Ivana, is an event that’s been well-publicized and enshrined in the public record.  Later, while married to Marla, he began an affair that ultimately led to his marriage to Melania.  Since becoming a public figure, news reports and self-admissions have connected him with numerous affairs and improprieties with random women.

His tawdry behavior shapes my evaluation of his relationship with his wife/wives.  This same behavior shapes my evaluation of the character of one given the sacred responsibility of making decisions for the wellbeing of 324 million-plus Americans.  In that context, I have determined his character as devoid of any moral compass.  He has shown himself to be a narcissistic opportunist without values that aren’t connected to his own enrichment.  More disturbing is the fact that any infidelity involving his wives or family is insignificant when balanced against the infidelity to which he has subjected the nation.  Let me explain.

Every president swears an oath “to protect and defend The Constitution of the United States from all enemies, foreign and domestic” and adhere to “The Rule of Law.” As Chief Executive, #45’s job is to provide for the lawful defense and security of all citizens of this nation without regard to race, gender, religion, creed, color or national origin.  It is his job to preserve the institutions that form the foundation and provide for the orderly conduct of the nation’s business.

In these responsibilities, #45 has demonstrated infidelity far worse than that which he has shown his family.  Most commonly, he has:

Viewed in the aggregate, his conduct suggests his intent to move our government away from democracy to the establishment of an authoritarian regime akin to the nature of his businesses.  That effort must not succeed!

We must not forget that #45 was rejected by a margin of three million votes in 2016. If it were not for the outdated Electoral College, we wouldn’t have to endure this on-going atrocity.  We must take the recent lessons of the value of our votes and use them wisely.