In a nation founded on whiteness, how to really discuss it? 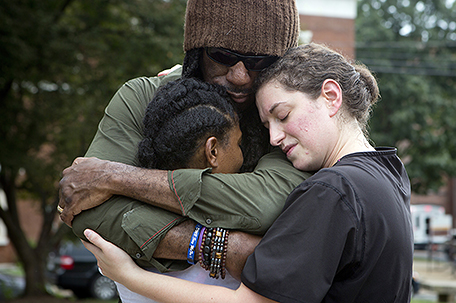 ABOVE PHOTO: This photo from Tuesday Aug. 15, 2017, shows Aaliyah Jones, 38, left, Boyd Tinsley of the Dave Matthews Band, center, and Amy Hastings, 29, right, as they embrace each other near the Confederate General Robert E. Lee monument in Emancipation Park, Charlottesville, Va., following a deadly white nationalists rally over the weekend. In a nation founded on whiteness, experts share perspective on whether it can be discussed. If white people want the future to be different, said Rev. Susan Chorley, a Boston area pastor, they have to be willing to look at the past and the present. “I think it’s on us,” she said. (AP Photo/Julia Rendleman, File)

John Bost seems precisely the kind of person that his fellow Americans could have a conversation with — politically moderate, neither an Obama voter nor a Trump one, willing to engage with those both more liberal and more conservative than he is, the former mayor of the North Carolina town where he has lived for more than a quarter century.

“They try to compliment you. But I read between the lines. They say, ‘You’re a deep thinker,’” Bost, 72, of Clemmons, North Carolina, says, laughing. “After a while, they just don’t show up as much.”

The conversation. The one about race. The one about whiteness and what it means in a multiracial society that is 150 years out of slavery but still reverberating with racial horror. The 21st-century conversation that seems more relevant than ever, yet the one many white people simply don’t have, or don’t want to.

As pervasive and perpetual a subject as race is and has been in the United States — a reality that revealed itself even more starkly over the past year — the conversation about it has been a lopsided one. Most of the talking, protesting, and calling for change has come from people of color.

“We have all these other ways to not talk about race and white supremacy and white nationalism,” says the Rev. Jason Chesnut, a minister in Vancouver, Washington, who is white.

Call it the “fish don’t know they’re in water” perspective: As the largest, dominant group in the United States, assuming the position of the “norm,” white people generally have not identified with having an everyday collective racial identity like Black, Asian American, Native and Latino communities.

And yet, those who research it say, whiteness — and a commitment to it, however conscious — is as present as the air.

“For a long time, it was very easy for white people to sort of ignore race, because they could take their racial group for granted, and especially in an environment where they didn’t perceive a lot of threats to their group and its status,” said Ashley Jardina, an assistant professor of political science at Duke University who researches white identity politics.

S. Michael Gaddis, an assistant professor of sociology at UCLA, says research shows that for many white people, “their views on race are still in an era where race is something we should not be talking about.”

The day of the insurrection at the U.S. Capitol in January proved an apt case study for looking at this issue.

The racial makeup of the Jan. 6 insurrection was hard to miss — a predominantly white crowd of rioters, including some with connections to white nationalist and extremist groups, violently disrupting the certification of the presidential election and running unhindered through the Capitol, a symbol of American democracy.

The lax policing, a contrast to the strong law enforcement presence seen last summer during protests over the police killings of Black men and women, was swiftly pointed out as a racial double standard, and the presence of current or former military or law enforcement among the rioters sparked concern over extremism in military ranks.

But the entire crowd wasn’t law enforcement, or flag-waving extremist militia. Far from it.

They were also regular, everyday white people — small business owners, students, employees — who were ready to overturn an election because they thought their candidate needed to stay in office.

That’s something white Americans must wrestle with, as Chesnut sees it. Trouble is, he’s not particularly optimistic, based on his experience doing anti-racist work. Most white people he meets are surprised that a white man would even talk about race as much as he does.

“I don’t know if white people have learned how to be in a multiracial democracy,” Chesnut says. “White supremacy is destroying us, too, and I don’t think we talk enough about that.”

Or about much having to do with whiteness. In 2019, a Pew Research Center survey found that just 15% of white people considered being white either extremely or very important to how they think about themselves. That compares to 74% of Black people, 59% of Hispanic people and 56% of Asian people. The number of white people who considered their race extremely important to their self-image was just 5%.

Steadman, from California’s San Francisco Bay Area, doesn’t see race in what happened at the Capitol. She says it was an expression of political frustration, and that the supremacist presence was a small fringe that does not represent conservatives.

But she acknowledges the criticism that white conservatives face by not being willing to have a conversation about race.

“I believe there will be assumptions made about them, and their voices will not be heard and the assumptions will be the narrative,” she says.

High-profile events driven by racists also impede conversation. When white Americans have emphasized their racial identity in ways viewed as threatening — such as during the Capitol insurrection or the 2017 white nationalist rally in Charlottesville, Virginia — it makes white people in general more reluctant to acknowledge white as their racial identifier, Jardina says.

“The more we associate people storming the Capitol and waving Confederate flags with white identity and white supremacy, with a capital W and a capital S, the more we’ll find that many white Americans are going to back away from this,” she says.

That avoidance is precisely the problem, says the Rev. Susan Chorley, a Boston-area pastor.

If white people want the future to be different, she says, they have to be willing to look at the past and the present — and talk about it as if the nation depended upon it. Which, many say, it does.

“I think it’s on us,” Chorley says. “We as white people need to be gathering up our white people.”

But getting white Americans to genuinely wrestle with these issues, Jardina says, will be a struggle.

“Are white people willing to confront and have a conversation about the extent to which white racial prejudice and white racism, and the desire to maintain white power in the United States, is part of our political process?” she asks. “I’d say that for the majority of white people, the answer is no, they’re not ready to have that conversation.”