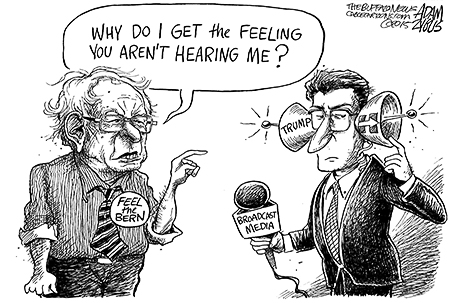 What’s not to like about Democratic presidential candidate Bernie Sanders. He brings four personal assets to politics that are glaringly MIA in American politics. That’s class, dignity, honesty and humility. He’s a throwback to a time when politicians actually talked about the issues and not such idiocies as the hair styling, make-up, dress, and facial expressions of their opponents, or endlessly toss out silly sound bite personal insults, digs, barbs, dirt or about at them. Sanders is much more than a gentleman-politician. His proposals to tackle wealth and income inequality, corral Wall Street abuses, back a top dollar minimum wage, and a massive job creation program is a dream come true for progressives. His willingness to turn a tone open ear to the plea to back Black Lives Matter and rail against mass incarceration shows requisite political deftness and flexibility.

Sanders is the much needed gale of fresh air to American politics. This is why he’s seen as almost the second coming of the Messiah to many, and draws dreamy eyed rock star size crowds. OK, but can he really win a general presidential election. Even a primary win in New Hampshire, and possibly Iowa, over rival Hillary Clinton may not change a bitter political reality. Bernie is a socialist and as close to an atheist as there is without really calling himself that. One of these tags would mortally wound any candidate for a national office. The two together will sink a candidate. Polls consistently show that a majority of voters will not vote against an African-American, a woman, Jew, or a gay lesbian, solely because of their race, gender or sexual preference. But they will vote against a socialist or an atheist. That’s not just conservatives or GOP leaning voters. That’s a sizeable number of Democrats and a majority of Independents too.

Let’s say Sanders does win the New Hampshire and Iowa primaries. The wins might be grossly misleading. They are two of the whitest states in the union. New Hampshire is practically joined at the hip to Sanders’ homes state of Vermont, and the oft times contrarian Iowa voters are tailor made for Bernie’s non-traditional, out of the box political pitch. The real test is whether he can repeat that feat in primaries in South Carolina, Nevada, Alabama, and Arkansas that follow close on the heels of Iowa and New Hampshire. They will be won or lost with the black vote, and in Nevada the Hispanic vote.

Bernie’s support among both groups is barely negligible. That’s in part due to their unfamiliarity with him and in greater part to the rock solid party traditionalism of black and Hispanic voters. They hue closely to the Democrat who stands on traditional and moderately framed bread and butter issues, with special emphasis on civil rights and immigration, is a known quantity, and can win. Hillary Clinton is that Democrat. Her long and admirable record on civil rights and immigration, and her deep ties with black and Hispanic Democratic Party regulars is the prime reason that there has not been the slightest hint of any perceptible rush to Bernie by black and Hispanic Democrats. A near textbook example was black lives matter. Clinton quickly got ahead of the curve and unhesitatingly backed the call, met with some of their supporters, and lectured mostly white audiences about the horror of black mass incarceration. Sanders came to the issue kicking and screaming. This point wasn’t missed by many blacks.

Packing an arena with tens of thousands of screaming, adoring fans looks impressive and gives the feel that there’s a real winning mass movement afoot for the candidate. But Sanders’ big crowds have come in cities such as Portland and Los Angeles that are majority white, liberal or both. On the flip side in 2012, GOP presidential candidate Mitt Romney drew mammoth crowds at many stops and still lost the popular vote to Obama by 5 million votes.

Like Trump, Bernie’s campaign is media serviceable on two counts. One, he and Trump are fodder for media titillation and sensationalism. Both make good copy in an otherwise staid, formula and dreary presidential slog. The other is that Bernie is the media’s perfect foil to taunt, and belittle Hillary, and try to cripple her campaign. Bernie’s not totally unaware of this ploy. In a talk to the Democratic National Committee confab in Minneapolis in August he sternly warned that the Democrats can’t win without someone who can rev up the troops. He didn’t mention Hillary by name. But it didn’t take a neurosurgeon to figure out who he was referring to if she was the Democratic nominee.

It’s no accident that early in presidential political games, the GOP presidential candidate(s) run to the hard right. Trump and Ben Carson are prime examples of that. Democrats run to the left. Sanders is the obvious example of that. However, in the stretch run when the Democrats and the GOP get down to the real business of weeding out the field. The final nominees quickly move to the center. The two rare exceptions to this rule were the rightist 1964 GOP presidential nominee Barry Goldwater and the leftist 1972 Democratic presidential nominee George McGovern. They were crushed in the general election. The electorate deemed both to radical. Would they deem that of Sanders too? That’s to say, I like Bernie, but is he really electable?