How To Train Your Monster 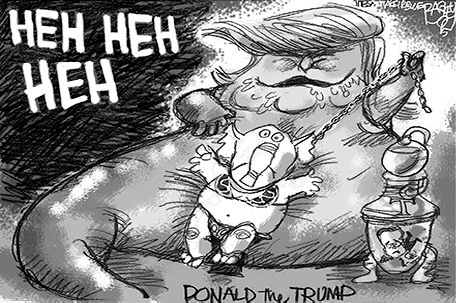 The Republican Party’s march to the far-far-right created the monster that is Donald Trump.

The question now is how does it handle this monster without splitting the party and further alienating voters?

Republicans aren’t laughing at the antics of Donald Trump anymore.

Many Republican donors have become  alarmed by Trump’s antics and are backing off on their once-unwavering support of the business tycoon. Some are proposing to bar him from future debates. Other candidates are openly attacking him.

Trump’s antics have led to Republican National Committee chair Reince Priebus having to burn up the phone lines to soothe anxious Republican consultants and donors. Preibus has told Trump to tone down the anti-immigrant/anti-Muslim rhetoric because, according to an article in The Atlantic magazine, such rhetoric threatens to alientate the key election constituencies of moderate conservatives and Hispanic voters.

Because he has almost limited financial resources, it might be a difficult proposition to tighten the reigns on Trump’s high-flying lip.

Apparently, the bulk of party voters are not on board with Trump’s extremism. While he continues to hold a commanding lead over challengers like Dr. Ben Carson, Marco Rubio and Ted Cruz, his verbal stylings are starting to cause his numbers to evaporate according to national polls. Rubio and Cruz’s numbers are beginning to surge in the vital Midwest.

The campaign has become rife with enmity. Trump has resorted to name-calling (he called Cruz a ‘maniac’)–and poll numbers on a likely outcome among conservative voters show Hillary Clinton winning in the national election by 27 percent among conservatives.

I spoke with local Republicans, some of whom requested anonymity, about the prospects for their party. Preibus might want to talk to them too, especially since what they say might tell them just how much trouble the party is in.

“Our country is known for its compassion and it’s moderation, said “Bobby”, a 41-year-old Republican strategist from Chester, Pennsylvania who didn’t want to give his real name. “I’m afraid that Trump has ignored completely that imperative. While I believe in conservative values, I just don’t think that extremism serves anyone—particularly as it regards national policy. We have to remember that America was founded by folks who were apprehensive of extremism and any policy that smelled of totalitarianism. It’s a little frightening to me that a man like Trump is my party’s front runner. His platform is radical, exclusive and, really, kind of fascist. I’m afraid for we Republicans—Trump’s style of extremism will likely alienate very many voters…”

“On a positive note for him, Trump is great at garnering attention,” said John Dobson, 52, a Marine veteran from Chester who describes himself as “unaffiliated.” “He’s a master of publicity and politicking—he says the things that people think but won’t say publicly. The racial component of his campaign will resonate with the extreme wing of the party, but in the end, those views won’t get him elected. Oh yeah, he’ll get the Republican nomination—he’s got more than enough cash to throw at his campaign and I give him a 60 percent chance of winning the nomination. But he won’t win the presidency. If he did, he’d want to close the borders—but that’s not who we are in this country…”

“I have been a conservative Republican since I’ve been old enough to vote, but Trump’s campaign seems more than a little gimmicky to me,” Byrd said. “He seems to be running to upset the apple cart, to throw a monkey wrench into the process. I mean, we’ve had enough problems with the process—nobody has forgotten the mess

[Florida] made of the 2000 presidential election. And with Florida’s substantial Hispanic population, which, ordinarily, has tended to be quite conservative, Trump’s anti-immigrant, anti-Hispanic rhetoric will alienate this vital constituency. If he has a strategy in this regard, I can’t fathom what it is..”

But for “Steve”, a chemist in his late 50s who describes himself as a Libertarian and didn’t want to use his real name, is being cautious right now. According to a national survey, there’s someone he’s leaning toward. But he hasn’t made up his mind yet, he said.

“I participated in a political survey recently and the results said that I leaned closer to being a Rubio man,” “Steve” said. “I’m not leaning one way or the other in terms of presidential candidates, but as a moderate, I’m hoping that we’ll elect a president who isn’t too extreme one way or the other. I don’t like extremists, either way…”

Some in the political know say that the best way to handle the Republican Party’s latest monster and his extremist views is to ignore him, attack him or mock him.

But for a blowhard of his caliber, that might be playing right into Donald Trump’s hands.