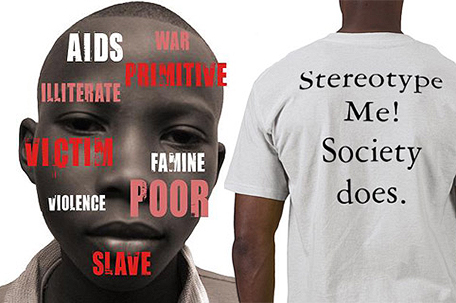 What perception do White people generally have when it comes to Blacks and how much of that perception is passed down from one generation to the next? How many negative and racist stereotypes do Whites foster about Blacks, where did they come from and how do they continue?

With just a little investigation you’ll find, like I did, that these stereotypes date back to slavery, monopolize public opinion, and can be seen in every known content medium.

I’ve always said that I’m a student of the struggle of Black People in America, not a scholar, historian, or journalist. I have a number of teachers, such as Frederick Douglass, Marcus Garvey, W.E.B. DuBois, the Hon. Elijah Muhammad, Malcolm X, Rev. Leon Sullivan, Dr. Martin Luther King Jr., James Baldwin and others. All of these teachers have inspired me to see the struggle of the Black community, both with the internal challenges that the Black community faces and the challenges faced in fighting a racist America that continues to oppress and suppress us. There might not be physical slavery but economic slavery most definitely exists. During my studies, l’ve come across information that confirms that the negative impact that nearly 300 years of chattel slavery, 75 years of Jim Crow and KKK terrorism has had on Black people, their psyche, and their current socio-economic conditions.

Every group has had Its issues, including the White community. Unlike any other group that has been discriminated against, oppressed and abused in America, none has experienced racism like the Black man, nor has that discrimination been enforced with such a sting. This is largely due to the idea that race in America is based on physical characteristics and skin color and the part that this has played in shaping American society since its inception. I contend that, for the atrocities of slavery and the structural and institutional racism to continue, the Black man must continue is to be portrayed as sub-human or less intelligent. This is primarily being done through the media. The perception of Black people has always been closely tied to their social status in America. Therefore, you’re enslaved because it’s better than to allowing you to be free. You’re poor and azy and your economic condition befits your capacity.

The more I study, the more I learn of the massive amount of physical, psychological, and spiritual pain inflicted on Black people since being in America. When you take all of this into consideration, you come away with a better appreciation of the resiliency of Black people. You should come to the belief that if given the right tools, Blacks could really excel…and believe that there is a segment of America who fears this.

But while I’m convinced that the harm that Black America has suffered Is severe, what I find more appalling is the cavalier attitude of many White Americans who treat our issues as meaningless events that Blacks should just get over. The trivialization of the Black holocaust of slavery is not only sinister, but shows a pure ignorance. In addition to the American institution of slavery, which was crippling in and of itself, every American system and institution from the judicial system to education has been rooted in the oppression of Black people. Even today, Blacks still have to fight for the basic rights afforded to all Americans.

What’s even more saddening is how the victim (the Black community) has been made to be the villain and put in the position of always having to justify and defend itself, something that never allows the truth to surface, especially when it’s an effort led by Black people.

America, led by its media, has done a masterful job of painting a picture of Black inferiority and has used all of its systems and institutions to make it a self-fulfilling prophecy. Malcolm X once said that the American media is the most powerful institution in the world because it can make a right man wrong and a wrong man right.

Many of the negative outcomes that we see today are to be expected when an entire group of people has been enslaved for nearly 300 years without any compensation. What is to be expected when Blacks’ growth has been suppressed at every level, even denying civil rights and access to equal public education? Thousands of Black people have been murdered, lynched, and terrorized for attempting to right some of these wrongs. Blacks have been robbed of their culture and history, which has been replaced with black inferiority and white supremacy. With families broken apart there was no way to transmit history from one generation to another. In protecting their children, mothers taught their children to obey, respect, and love the slave owner even at their own expense.

[Part two of this commentary in next week’s SUN.]

How does the American media depict Black people? (part two)