Hobby Lobby, and the Rule of Opportunity Costs 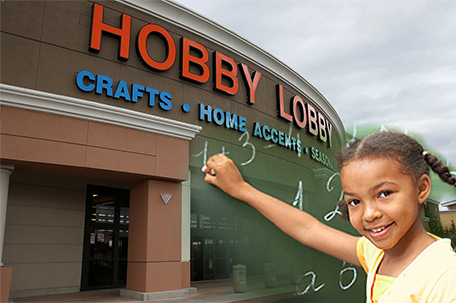 For five minutes in 1983, I was an Economics major.

I say that because it took about five minutes for me to realize that my total inability to do anything in math more challenging than the basics was going to make this whole being an economist thing a little difficult.

But while the fact that higher-level math is out of my wheelhouse kept me from channeling my inner Paul Krugman, I did get something out of my brief sojourn into economics: the Rule of Opportunity Costs.

This rule governs the choices we make when it comes to spending our money, time or any finite resource we possess. For example, if you want to buy a house and a car, the fact that you have only $50,000 a year to work with is going to force you to make a choice: you can get the car or the house, but you can’t get both.

Now the whole math thing usually keeps me from thinking too much about my five minutes as an econ major, but the Supreme Court’s recent decision allowing the Hobby Lobby arts and crafts store to decide what birth control its employees can use made me think of Opportunity Costs.

We have a finite pot of money to educate our children and take care of kids whose parents don’t have all the resources they need due to jobs that pay badly or no job at all.

That pot tends to get smaller every year due to the fiscal policies of the people who are practically doing cartwheels over this latest pronouncement from the Supreme Court.

Yet, while you don’t want employers to be made to pay for contraception due to a religious objection, something that I find kind of funny coming from a for-profit company, you also don’t want to expand that pot by making folks who either don’t pay enough in taxes or pay any taxes at all pay their fair share.

And with that, the rule of Opportunity Costs kicks in: If you want to force women to have children by not covering their birth control, you need to be willing to make sure they have a living wage and that their kids can be educated.

If you’re not willing to do that, let women add birth control to their health insurance.

Now the argument that Hobby Lobby makes, the “religious exemption” argument, is one that I hear from folks in the pro-birth movement all the time. Because in their eyes any birth control method that doesn’t rely on luck, otherwise known as the Rhythm Method, is an abortion end run, they feel that it shouldn’t be utilized. Meanwhile, these same folks will run to any polling place they can to vote for candidates that allegedly share their view, but don’t believe in providing the things necessary to make sure that the life of the child isn’t harder than it has to be.

One of my more adamant pro-birth folks disputed me on this, called my contention a “liberal meme”.

Thankfully, the Internet loves me…and provides me with things like the 2014 LIFEPAC Voters Guide….a guide that pretty much reads like a Republican campaign poster.

So I then went to the Internet and looked up how the folks of LIFEPAC was supporting votes on issues like education funding, Medicaid expansion, the Affordable Care Act, and the bills authorizing Long-Term Unemployment Expansion and an increase in the Minimum Wage.

In other words, once they’re born, they’re on their own.

We need to understand that if we really want to use our religious objections to determine what women can and cannot do when it comes to their reproductive choices, there are opportunity costs that are going to be brought to bear for that decision.

One of those costs will be the birth of children who will need for us to have a stronger social safety net than the one we’ve been cutting holes into since the 1980s and an educational system that provides a decent education to all.

Without that birth becomes the ultimate opportunity cost.