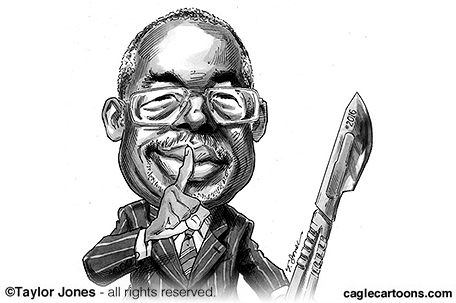 Forget the racial insult, the stock rightwing putdown of President Barack Obama, and the fact that this preposterous dig came from Murdoch. What is more interesting is Murdock’s rationale for calling Carson a “real black president.” Carson, presumably, would bridge the racial divide, says Murdoch, and that means he’d be the true unifier the country needs. There’s really no need to recite the long and steadily growing litany of Carson’s idiocies on everything from taxes “simply tithe,” to comparing Obamacare to slavery, claiming that arming kindergarten teachers is the way to stop a mass killer, and his equating homosexuality with bestiality. Or even his reach back a millennium to chastise the citizens of Pompeii for not running away from the lava to save their lives when Vesuvius erupted.

Carson is on an incredible roll. He knows that his nutty quips will be spread eagled over every media outlet and roil legions on Facebook and social media. He’s at or near the top of heap in some polls as a top GOP presidential candidate and that show him even more implausibly actually beating Hillary Clinton in a hypothetical head to head showdown. But beyond his endless milking of his rags-to-successful-neurosurgeon story and the inane quips about President Obama and Democrats before packs of ultraconservative fawners and groupies, what makes him real political timber, let alone presidential stuff?

Carson initially got and keeps currency because he’s black and can be relied on to make the most ridiculous, media grabbing quips on anything that crosses his mind. But as Murdoch hints in his “real black president” tout of Carson, he can say what GOP ultraconservatives and unreconstructed bigots want to say about Obama, but it just sounds better coming out of Carson’s mouth. The GOP has turned this tactic into a studied art with black conservatives such as Clarence Thomas. But Carson makes far better copy than Thomas, because, unlike Thomas, Carson actually speaks, and when he does, he’ll say something just ludicrous enough to get attention.

In the Obama era the GOP has worked overtime to tout, cultivate, prop up, and showcase a motley collection of black GOP candidates for a scattering of offices. The aim is two-fold: to find that someone who can have just enough luster and media appeal to be a counterbalance to Obama while at the same time allowing the party to thump its chest and claim it’s not racist.

But let’s assume that Carson has a real chance to bag the GOP nomination and even the presidency. How would this “real black president” actually govern? Carson has so far not put pen to paper and laid out a comprehensive program and position on the budget, government spending, civil rights enforcement, the environment, crime control, the military, and foreign policy.

“President” Carson’s position’s on the issues must be pieced together from his statements in debates and interviews and speeches he will spend big on and radically expand the size of the military. In the process, he will not tie the military’s hands. He backs the use of torture in fighting terrorism He will boost trade and eliminate deficits by imposing “stiff tariffs” on all imported goods. On civil rights and civil liberties, he sees no pattern of racial profiling in the disproportionate number of minority arrests. He touts stand your ground laws. And on his signature worry, gay rights, he will accept gay marriage because it’s the law, but would do nothing to expand protections and rights for gays.

He would covertly spy on government workers to make sure they are not slacking off. And while he’s at it, he would unilaterally cut the budget by 10 percent for every government agency. Public education would go the same way. He called it a “propaganda system.” He would ignite a stampede by the government to back vouchers, charter schools, and any and every type of private school to take up the slack.

Since he has relentlessly attacked the Affordable Care Act, branding it tantamount to slavery, he would cheer yet another effort to gut, if not outright eliminate it altogether. The climate change argument will get nowhere with Carson. He has called it “distracting and irrelevant.” Being the loud outspoken man of the faith he purports to be, he’s declared creationists, not evolutionists, have “god’s ethics.” He will give a fresh nod to creationism in the schools. Likewise, given his staunch pro-life, anti-abortion view, he will ban all abortions soon after fertilization and absolutely oppose any abortion for “convenience”

Carson’s fervent backers see all of this as the prescription for a new type of White House, and better still a change in the substance and style of governance. It will, of course, be nothing short of a colossal disaster and turn government into a laughingstock. But then again that’s how Murdoch’s “real black president” will govern.