Here’s how ‘President Cruz’ will govern 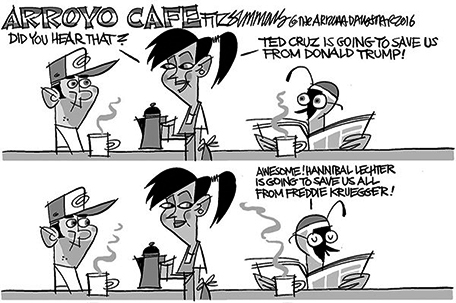 The conventional wisdom is that the Republican candidate who poses a far greater peril than Donald Trump can’t possibly win the GOP presidential nomination, and would have absolutely no chance in a general election. The result is that few have actually taken the time to closely scrutinize Sen. Ted Cruz’s actual record. Now that the race for the Republican presidential contest is effectively a two-man race between Trump and Cruz, and the GOP establishment is mounting a furious, all-out full court press to stop Trump, it’s time to take the hard look at Cruz that should have been done long ago.

In 2000, the then 29-year old Cruz was the domestic policy advisor to George W. Bush’s presidential campaign and a former law clerk for the hard-line, strictest of the strict constructionist Supreme Court chief justice William Rehnquist. From his Bush post, Cruz lined up the legal team that wrangled the conservatives on the Supreme Court to halt the disputed election Florida election count and tip the White House to Bush. Cruz’ star skyrocketed in the GOP after that triumph.

While Cruz has seemingly warred with the GOP establishment at times, the fight has been mostly over his style, personality, and comportment, not on key issues ranging from abortion and Planned Parenthood to the economy and foreign policy. Take Cruz’s rough edge off his bluster about these issues, and his stance on them is mostly in line with the party’s. Cruz has been on the political scene long enough to have enough of a paper trail to piece together a fairly accurate picture of what he will say and do on big ticket issues like government spending, civil rights enforcement, crime control, and foreign policy if in the White House, and compare him to Trump.

On civil rights and civil liberties, Trump accepts the Supreme Court decision in support of gay marriage, says he’s “fine” with affirmative action, and will enforce the nation’s hate crime laws. Cruz would do everything he could to wipe out the Supreme Court’s pro-gay marriage ruling, and clamp down on gay pride parades. He would also oppose reauthorizing the Violence Against Women Act, would require voters to show IDs, and, of course, would outlaw any and all abortions. He’d dump the common core standards and let local school districts decide all education issues with no federal checks and controls. Trump hasn’t gone that far and taken a total hands-off by the feds of education decisions.

While Trump toes the pro-forma GOP line and derides climate change as a “hoax,” he at least acknowledges that there may be some need to take some action. Not Cruz, he signed the No Climate Tax Pledge, flatly said no to initiatives to protecting ocean, coastal and great Lakes ecosystems, and would open up all federal lands to oil, gas and coal companies.

Trump takes the GOP tough line on military confrontation in the Middle East and anywhere else, but he’d also cut funding for the Defense Department. Cruz won’t. He’ll ramp it up and put boots on the ground in the Middle East, unleash a non-stop air war on ISIS and its supporters, put anti-ballistic missles in Eastern Europe to confront Russia, and oppose any dealings with Iran. While Trump took much heat for backing waterboarding and torture, Cruz would just keep whatever torture is done, “classified” meaning the public just won’t know about it.

Trump dutifully repeats the GOP party line that the Affordable Care Act is a “disaster,” and will try to repeal and replace it. Cruz wouldn’t just talk about it, to quote him “he’d throw his body in front of a train to stop it.” He backed that up by trying to shut down the government to get the Senate to vote for repeal. Trump talks big about cracking down on labor unions, flatly opposes any minimum wage increase, advocates a border wall, and will crack down on Muslims coming and going in the country. But Cruz has actually voted against every immigration reform proposal, a minimum wage increase, supports a border wall, and will give police agencies virtual unlimited authority to investigate immigrants.

Trump won’t abolish the IRS. Cruz will. Trump will negotiate some trade agreements even with US foes, Cruz would oppose many of them. Trump hasn’t said much about his plan for Social Security and Medicare. Cruz has. He’d fully privatize Social Security, hike the age for Medicare eligibility, and “demand” a balanced budget amendment which would effectively slash and burn funding if not outright eliminate legions of health, education and job programs.

Cruz’s record has made him the runaway darling of every Tea Party, fringe and respected ultra-conservative, religious freedom, federalist, and state rights group in the nation. While millions cringe in stark terror at the prospect of a Trump nomination and White House occupancy, Cruz is being put forth by much of the GOP establishment as the respectable alternative to Trump.

Earl Ofari Hutchinson is an author and political analyst. His latest book is From Sanders to Trump: A Guide to the 2016 Presidential Primary Battles (Amazon Kindle). He is an associate editor of New America Media. He is a weekly co-host of the Al Sharpton Show on Radio One. He is the host of the weekly Hutchinson Report on KPFK 90.7 FM Los Angeles and the Pacifica Network