Hattie, Coretta, and women of the Movement 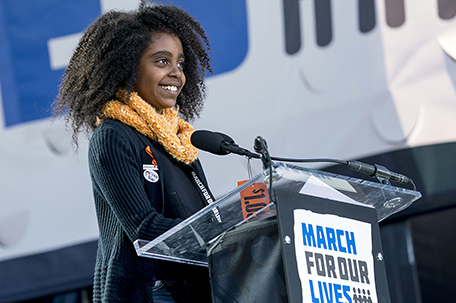 ABOVE PHOTO:  Naomi Wadler, 11, a student at George Mason Elementary School, who organized a school walkout at her school in Alexandria, Va., after the school shooting in Parkland, Fa., speaks during the “March for Our Lives” rally in support of gun control in Washington, Saturday, March 24, 2018. (AP Photo/Andrew Harnik)

Hattie Carroll (1911-1963) was a 51-year-old restaurant server who was murdered by a White aristocrat, the 24-year-old William Devereux Zantzinger (1939-2009) who struck her with a cane because she took to long to serve him a drink.  The site was the old Emerson Hotel in Baltimore, at an event, The Spinsters’ Ball.  Zantzinger’s crime was minimized, and he got a scant six months in jail (not prison) for killing a woman, the mother of at least nine children, who was more than twice his age, and with just a fraction of his power.

Bob Dylan popularized the murder of Hattie Carroll in a folk song, “The Lonesome Death of Hattie Carroll.”  He didn’t get all the facts right – Hattie Carroll didn’t have 10 children as he crooned, and Zantzinger was never indicted for first-degree murder.  Still, the haunting croon was a poignant reminder that a rich and powerful white man with a diamond ring on his finger and a cane in his hand got away with killing a Black woman server.  More than that, Zantzinger was treated with kid gloves, allowed to “take a break” from his incarceration to make sure his tobacco crop was planted.

Young Naomi Wadler, the 11-year-old speaker at the March for Our Lives did not know about Hattie Carroll.  Why would she have?  The Alexandria, Virginia fifth-grader was born in 2007, 44 years after Hattie Carroll died in 1963.  Her plea to consider the Black women who do not make headlines might well have been extended to Hattie Carroll, but Naomi Wadler did not know, and we don’t know enough to juxtapose White privilege with Black women’s invisibility.

Without knowing all of the details, Naomi shared that Black women don’t often make headlines.  She knows that her contemporaries could be targets of guns, of police brutality, and that their (our) plights are often ignored.  Ms. Naomi knows, along with so many of her colleagues, that Black women are worth more than the shrug of shoulders that Mr. Zantzinger offered when he was confronted with Hattie Carroll’s murder.

On April 4, we were reminded that it is the 50th anniversary of Dr. King’s assassination.  We remembered Dr. King through our prisms, considering him as a prophet, an evangelist, a social justice advocate, and activist, an educator, an economist, a leader and a martyr.   We cannot consider him in any silo, though, and we must consider him in the context of the women who supported him, who empowered him, and who were sometimes martyred along with him.

Dr. Barbara Reynolds has written about Coretta Scott King and her major contributions to her husband’s work.  The King biographer Claiborne Carson shared private letters between Martin Luther King, Jr. and his “boo” Coretta, where they clashed and reconciled in exciting prose that illustrated their regard for each other.  Did the Kings know that a depraved White man, William Zantzinger, was sentenced to a mere six months for killing a Hattie Carroll on the same day that Dr. King delivered the ‘I Have A Dream” speech?

Thanks to Naomi Wadler, we will pay more attention to these Black women like Hattie Carroll, whose stories have been swallowed.  Thanks to King’s granddaughter, Yolanda Renee King, and her colleagues in the March For Our Lives, we will consider nonviolence differently.  But mostly thanks to the legacy of Hattie Carroll, we will be forced to consider the many ways that women’s contributions to the women’s movement have been too frequently ignored.

Medgar Evers was gunned down in his driveway in Mississippi.  Hattie Carroll was caned down in Baltimore’s Emerson Hotel for simply doing her work.  Without rank ordering death and pain, it is important to note how incidental the deaths of Black women too often are.  We don’t, said young Naomi Wadler, make the headlines.  Our stores are too often untold.  Yet if we commemorate the 50th year after Dr. King’s assassination, we must commemorate the women who were slaughtered by racists.  Hattie Carroll is one of them.  Her tragic story must be woven into our history.

“Betty and Coretta”: An historic double-header