Hate and horror – when does it stop? 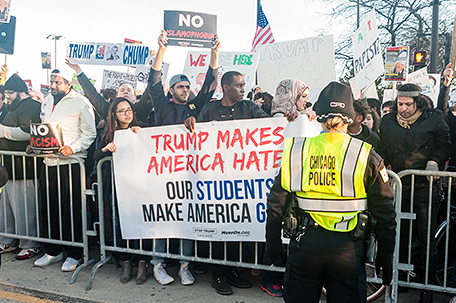 As strange as it seems, I now view the Bush years with nostalgia.  Both Big Bush (POTUS 41) and his son Shrub (POTUS 43) incurred the ire of Democrats, with Shrub’s Supreme Court-complicit theft of the 2000 election prompting anger and protests. Both Bushes, perhaps because of their love of country, comported themselves as gentlemen despite the protests. In the face of Democratic anger, they exuded civility. And why not?  Each won his election, each loved the country, neither had to be mean or hateful to Democrats, people of color, immigrants, Jewish people, the LGBTQ community or anyone else.  While they did not budge on their ideology, neither painted their political opponents as enemies.

Fast forward. Now we have a President who lost the popular vote by 3 million. He bullied his way into the Republican nomination, doing the kind of name-calling that we’d put a 5-year-old in time-out for. And he has blustered his way into the presidency with the same invective, hate, anger, and crowd-pleasing tirades that marked his campaign. Even when he attempts to be decent, which means merely reading from the teleprompter language someone else has drafted, he has to stop, mid-comment, to pat himself on the back and remind us that he is “being good.” Really! A 70-year-old man trumpets that he is “being good” and he expects applause.

The tragedy of Trump is that his Republican allies have not condemned his nonsense because they see political gains in his “leadership.” Motivated by 45, Cesar Sayoc “allegedly” mailed at least 15 pipe bombs to Democratic political figures that Trump has criticized. Instead of doing the decent thing (like calling his predecessors, Presidents Barack Obama and Bill Clinton to pledge to use federal resources to get to the bottom of this madness), he spent time speculating that perhaps this was a Democratic set-up. Even when Sayoc, with a van emblazoned with Trump paraphernalia and anti-CNN propaganda, was caught, he had little to say to condemn the bomber. We don’t know if Sayoc worked alone, or had company. We do know that Democratic leaders are being forced now to take precautions against insanity.

During the same week that Sayoc was arrested, a White man, Gregory Bush, 51, tried to break his way into First Baptist Church, a Black church in Jeffersontown, Kentucky, a suburb of Louisville. When he failed to gain entry to the church, he went to a nearby Kroger and shot a Black woman, Vicki Jones, 67, in the store. Then he shot Maurice Stellard, 69, in the parking lot, in front of his 12-year-old grandson. A White man had the possibility of shooting him to stop him, but when Bush assured the White man that “White people don’t shoot White people,” he let him go. Thankfully, law enforcement officers caught him, but it took them four days to declare his crimes a hate crime. Why? Have we so normalized the shooting of Black people that it is okay for an armed bigot to go into a public space and kill Black people and law enforcement officials have to think about whether this is a hate crime or not?

The end of a week when hate prevailed was the occasion of the worst crime of that week. Robert Gregory Bowers, 46, entered the Tree of Life Synagogue in Pittsburgh and massacred 11 people.  The oldest was a Holocaust survivor in her 90s, the youngest, a pair of disabled brothers in their 50s.  Bowers has now pleaded not guilty to 44 counts of murder, attempted murder and hate crimes. Our hateful president, despite community pleading insisted on visiting Pittsburgh for a photo op (he says to pay his respects).

It is futile to think that a man who uses hateful rhetoric as his stock in trade will back down, even as it is clear that the rhetoric is working. It is pointless to think that Republicans will call him to task because they are gaining too much from his hate. It is fruitless to think that some of the Republican White men in power – Sen. Mitch McConnell, Speaker of the House Paul Ryan, Sen. Lindsey Graham, and others – will talk to White men like Gregory Bush, Robert Gregory Bowers, and Cesar Sayoc to explain why their actions are unacceptable. The new reality is that we have an unchecked leader who spews hate and his loyal army follows with hateful actions, whether it is assaulting people who come to his rallies, chanting ugliness, or sending bombs and killing people.

The week of October 22 may have been one of the saddest weeks in our nation’s recent history. It is unfortunate because of the hate spewed and the lives lost, but also because of the delayed news coverage of the Jacksontown massacres of two Black people at a Kroger’s store. Initially, the media failed to connect the dots, leaving many Black people ready to shout, again, Black Lives Matter.  Hate is hate is hate is hate, and we have to resist it all!  Republicans of conscience, where are you?

Julianne Malveaux is an author and economist. Her latest book “Are We Better Off? Race, Obama and Public Policy” is available via www.amazon.com. For booking, wholesale inquiries or for more info, visit www.juliannemalveaux.com

To Be Equal: Do not be complacent in the face of hate